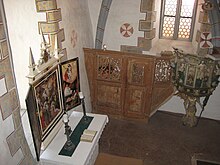 A chapel is a structurally small space for prayer, worship or devotion. It can be a free-standing church building or a room in a larger building. Within (larger) churches, chapels are adjoining rooms for worship services that can have different functions. Some chapels are privately built.

The canon law of the Roman Catholic Church distinguishes between a chapel ( Latin oratorium ) and a private chapel ( Latin sacellum (privatum) ). In some free churches, the church's place of worship is called a chapel.

Kapelle comes from the Latin cappa 'coat'; Diminutive capella . This originally referred to the place where in the 7th century the cloak half of Saint Martin of Tours in Paris was venerated as an imperial relic and the saint himself was venerated by the Merovingians . The Capella , the name for the small - closed - space was already in Old High German as Capella common.

Chapel as a structural term

The name of the chapel in Paris was transferred to small dependent prayer or worship rooms within larger sacred or profane buildings, such as choir, apex, wreath, aisle and votive chapels in churches, hospitals and the like, as well as free-standing buildings such as baptistery, funeral, castle and palace chapels and smaller churches.

Due to the mass grants customary in the Middle Ages , the founding of brotherhoods and the foundation of votive altars as well as the individual celebrations of the priests , which were customary up to the Second Vatican Council, two or more side altars were set up in churches depending on their size. If this separation creates half-open rooms, these are referred to as "side chapels". If there are several of these around the apse , this collection is called the " chapel wreath ". One of the first chapel wreaths was planned and implemented in Tours (around 1000). " Choir chapels " can be found predominantly with Cluniac and Cistercians. Chapels that are integrated into the overall building and not added on are called insert chapels .

Whether a - more or less - free-standing chapel is counted as an independent building depends on its location in the structure . In addition to churches standing alone outbuildings form, with the main building, a building complex , so the monument creates a complete system . Gades attached to the outside of a church are counted as a building wing to the main house and, if they are also accessible from the inside, form a building complex . Chapel buildings in castles, monasteries, in hospital areas or cemetery facilities are also counted partly as a component, partly as a structure of the facility or complex.

Functional aspects of the chapel

Different types of chapels can exist within churches, depending on their location or function

Settlements of religious communities , if they do not have their own church, should have “at least one chapel ( oratory ) in which the Eucharist is celebrated and kept so that it is really the center of the community ” ( can. 608 CIC ). This oratory is usually located inside the monastery building, but is often accessible from the outside.

For free-standing chapels, a distinction is made between

From the 4th century to the Middle Ages next to churches baptisteries (were Baptisteries ) built that were detached generally and could be connected to the church. Today the chapels in churches in which the baptismal font is located are called baptistery.

Court chapel in Kolben in a district of Wiggensbach

Pilgrimage chapels are the goal of Christian pilgrimages or processions . There, the image of grace or another religious symbol is venerated, which often goes back to a “ miracle ” (appearance of the Virgin Mary or saint, rescue from danger, healing, etc.). The chapels were sometimes donated by the beneficiary of a miracle, but later they were often rebuilt and enlarged. Some pilgrimage chapels are in a prominent position in the surrounding landscape (e.g. on a hill or in a river valley).

Following the example of the Franconian royal palace, chapels were set up as private prayer and prayer rooms for the lords of the palace in secular and spiritual courts. These are then named according to the location, the sponsor or the client: Palatinate, castle, palace, bishop's chapel , Sistine chapel . In some council and town houses there are also worship rooms in which relics , throne insignia , documents or seals are kept.

Pest chapel on the Herrnberg in Wörth on the Danube

Court chapels are small churches or wayside shrines that are assigned to one or more farms and were often donated and built by the farming families on their farm or nearby. They serve occasional devotions or the rosary prayers of the surrounding families. Occasionally, on annual commemorative days , for example, a holy mass is held there, and court chapels can be used as blessing stations during corridor processions or the Corpus Christi procession . Many of the court chapels, some of which are lavishly furnished, are under monument protection .

Path chapels are small chapels, often at crossroads or branches. Sometimes they are also called holy houses ; the demarcation to the land monument and the wayside shrine or broad pillar is fluid. Some chapels are based on older roofed or enclosed crosses and stones. " Station chapels " have been built along pilgrimage routes .

Individuals, associations, brotherhoods or village communities have set up votive chapels out of gratitude or as a result of a vow . Numerous “plague chapels” - mostly dedicated to the plague saint Rochus - commemorate victims of a plague epidemic , e. B. the plague chapel (Cochem) or the plague chapel (Waith) , or were built when the place was spared from the plague.

Hermit Chapel is a redirect to this article. See also: Einsiedelkirche or Einsiedlerkirche .

Especially in southern Europe there are numerous “hermit chapels” ( Spanish: ermitas ). In most cases no hermits lived here , but served as pilgrimage and processional chapels , visited once or twice a year.

Peace chapels are dedicated to peace and the memory of the victims of war. More recent developments are train station, “ motorway ” and “ airport chapels ”.

A chapel ( oratorio in Latin ) is designated in canon law “for worship for the benefit of a community or a group of believers meeting there ” ( can. 1223 CIC ). Church services can be celebrated there and sacraments can be donated. A special form is the private chapel ( Latin sacellum privatum ), which is intended for the benefit of one or more physical persons ( can. 1226 CIC ).

Like the establishment of a church , the chapel or private chapel also requires the approval of the competent ordinary . No church consecration is planned for chapels and private chapels , but a blessing is appropriate.

A chapel ( oratory ) can - for example in spatially large parishes - have its own baptismal font "for the benefit of the faithful" if the diocesan bishop approves it ( cann. 858 § 2 CIC ). If a chapel is permanently open to the faithful, the prescribed collection of donations for parish, diocesan, national or church-wide projects takes place there ( can. 1266 CIC ).

If it is no longer possible to use it as a place of worship or if there are serious reasons for it, a chapel can be returned with the consent of the Ordinary by profaning "profane, but not unworthy use" ( can. 1222 CIC ).

In the Evangelical Church the church building of small Protestant communities in the official German language chapel called unless they own historical name such as "monastic church" carry. The associated evangelical congregation then bears the name Kapellengemeinde , the responsible governing body is called the Kapellenvorstand, the members of the chapel board are chapel masters. The chapel community does not have its own pastor's office and is therefore assigned to one or several parishes for shared use of the pastor's office without losing its independence.

In Austria the equivalent of a Catholic chapel is the sermon point .

In the German-speaking area, regardless of its size, the place of worship in a free church is often referred to as a chapel. The assembly building of the Seventh-day Adventists is called “Advent Chapel” or Advent House in many places .

In an effort to differentiate themselves from the national and state churches, free church communities looked for a name for their places of worship in the 19th century. At first they called their houses of worship, which were initially housed in converted houses and stables, simply “meeting places”. With the beginning of the free church building, the biblical term house of prayer was used. Based on the congregational chapel of the English-speaking area, the term chapel also prevailed. It was a simple hall without a bell tower. Due to an official decree, free church chapels (similar to synagogues ) were often only allowed to be built as backyard buildings ( court church ).

The interior of these chapels was limited to the bare essentials: benches, central pulpit , communion table in the Baptist or altar in the Methodist chapel , harmonium (in rare cases an organ ) and often a gallery . On the inner front wall there was a simple cross and often an inscription with biblical or evangelistic content. The parish life of the free churches consisted not only of Sunday services, so a kitchen, toilets and group rooms were part of the equipment of free church chapels from an early stage. The so-called " mailboxes ", through which information is distributed to the parishioners, are also typical of the entrance area of ​​a Baptist chapel . Free church chapels usually have names.

"If earlier chapel names can be summarized under the leitmotif community experience of the people of God (with a preference for the Old Testament: Bethel , Eben-Ezer , Immanuel , Zion and Zoar chapels), names from the area of ​​the preaching of Christ are preferred today: Chapel of Christ , Cross , Resurrection and Peace. Another trend can be observed: in the free church sector, chapels are increasingly becoming churches and community centers "

Both in the free church area and in circles of the community movement, a veritable “chapel piety” developed in the 19th century. The song by the Methodist Ernst Gebhardt is evidence of this.

I know a lovely chapel, my heart likes to stay there;
I sing praises of the Lord with my brothers and sisters.
||: Pilgrims, come, come, come to the chapel, soon you will certainly like to be here too!
You will find dear siblings there; come sing to the Lord's praise! : ||

Who knows this lovely chapel to which my longing always goes?
Hearts glow in devotion in fervent ardent prayer.

O pilgrims, you know the chapel. She stands in the peaceful place.
One hears holy witnesses proclaiming the pure word.

Chapel, you forecourt of heaven, in you my heart found God's house,
in my Immanuel's heart I rest in peace forever!

An expression of “chapel piety” is also the smash hit by Elvis Presley from the mid-1960s: You saw me crying in the chapel . The last verse of this song is:

Take your troubles to the chapel
Get down on your knees and pray
Your burdens will be lighter
And you'll surely find the way.

Observations of other behaviors seem to contradict this. These are occasionally portrayed and criticized drastically:

“Meeting rooms and the appropriate behavior of those taking part in the service hardly differ from the customs in private rooms. ... If a Catholic church forces the symbolic real presence of the saint ... to devotion and silence, the functional religious buildings of Baptist and other free church provenance animate (if there is no original new building, for cost reasons it is often former factories , warehouses or Cinemas ) often to exuberant hilarity and private conversations at a not inconsiderable volume before, after and sometimes also during the service. ... Already the architecture and design of our community centers (which used to be called “houses of worship”!), Which are increasingly being identified by the deposition of self- batik artifacts that are no longer needed , half-dried plants and gigantic electronic equipment without any feeling for spatial aesthetics attention to the profanity which, along with the space, also dominates the time of many free church services. "