The title of this article is ambiguous. Further meanings are listed under Factory (disambiguation) . 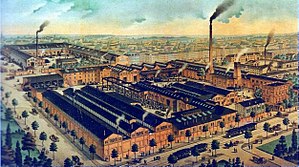 A factory , from Latin fabricare "to make", is a production facility on an industrial scale, which, under the name of industrial company, combines a large number of different work processes and essentially manufactures products with the help of machines , production employees and management . The owner or operator of a factory used to be referred to as a manufacturer , today it is mostly an entrepreneur . The building in which this facility is located is known as a factory.

A distinction is made between the factory and the manufactory , in which the mechanical equipment is usually only minimal and is mainly worked by hand with a large, sequential division of labor . Here it is often possible for employees to work from home . The material equipment of a factory, on the other hand, consists to a large extent of machines (accounting for fixed assets ), which enables an increase in productivity. With increasing bureaucratisation and division of labor, the term “factory” was replaced by factory or factory .

In the early days of the formation of manufactories (still during the guild system ) these were subsidized by the state, as they saw the possibility of increasing the export of valuable products and collecting urgently needed cash . The actual upswing of the factory industry and with it the transition from manufactories to factories began with the appearance of powerful mechanical devices in the late 18th century, the beginning of industrialization . This development began around 1770 in Cromford, England, with the invention of the Waterframe by Richard Arkwright . 1783 founded Elberfeld businessman Johann Gottfried Brügelmann with the textile mill Cromford in Ratingen the first factory on the continent . The Hard spinning mill, founded in 1801 near Wülflingen (now part of Winterthur ), was the first factory in Switzerland.

In the following decades, the further mechanization of work processes by machines and in particular the invention of the steam engine accelerated the industrialization and spread of the modern factory.

The installation and use of these machines could only be carried out with a large investment of capital , which could not be done by many small, artisanal small business owners. This development led to large-scale enterprises in many branches, which displaced the domestic and independent small businesses common at the time as a result of falling prices for factory products from many sectors. The associated emergency situation of craftsmen extended well into the 19th century and at the time even raised doubts about the necessity of manufacturing companies.

The Factory Operation displaced one hand, certain groups of producers, but on the other hand he created in addition to the manufacturing factory workers a number of other fields of work, for example, trading intermediary technician , working directions , Foreman , master , and supervisor officials . The transition from artisanal and agricultural production to factory production had social consequences. He caused u. a. the following changes:

In the course of rationalization , globalization and automation , fewer and fewer people are working in factories in Western Europe, and they are in a position to have to manufacture more and more products in an ever shorter time due to increased workload , in short: productivity can be increased.

Information on legislation relating to factories can be found under Factory Act , Occupational Safety and Health and Environmental Protection , among others .