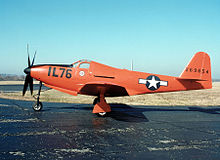 The Bell P-63 Kingcobra was an American fighter aircraft from the Second World War . Initially referred to as P-39E , it was first changed to XP-76 before the final designation P-63 was determined.

The design of the model was similar to the Bell P-39 Airacobra : all-metal low-wing aircraft with nose wheel landing gear, Allison engine behind the pilot's cabin, which propelled the propeller via a long-distance shaft. The main differences to the Airacobra were the laminar profile of the blades and the four-blade propeller.

Approval of the P-63 by the USAAF:

Planned as the successor to the Airacobra, the USAAF did not use the model at the front. A total of 3,303 machines were manufactured and most of them were delivered to the Soviet and Free French Air Forces as part of the lease-and-loan agreement . It is controversial whether the Soviet machines were still used against the German Reich . The operation against Japan in August 1945 is certain . Kingcobra pilots shot down several Japanese fighter planes - the only confirmed kills of this type. The French used their machines in Indochina until 1951 . There the aircraft proved themselves as fighter-bombers , but even with them the French defeat could not be averted. The Soviet Kingcobras were retired around 1948, but the NATO code name Fred was assigned to the type by NATO .

A target version was manned and painted bright orange. While the aircraft was shot at with special graphite or lead ammunition (which decompose on impact) , the pilot was protected by a 680 kg duralumin shell. The hits were indicated by colored lights on the outside of the aircraft. This earned the machine the name "pinball" because the lights reminded of a pinball machine .