The North American P-51 Mustang is a single-engine fighter aircraft produced by the US manufacturer North American Aviation . The single-seat all-metal - low-wing aircraft was in the Second World War, especially as long-range escort fighter in the bomber units of the United States Army Air Forces used (USAAF). The letter "P" in the name stands for fighter aircraft ( English pursuit 'pursuit').

The aircraft, developed in 1940, did not initially have outstanding flight performance, but this changed fundamentally with the installation of the British Rolls-Royce Merlin aircraft engine , which was manufactured under license from the Packard Merlin V-1650 in the USA, and further improvements. Due to the excellent flight performance and the very long range, the Mustang is considered one of the best fighters of the Second World War.

The Mustang was created when, in January 1940, the British procurement commission responsible for purchasing US weapons asked North American whether this company could manufacture the US Curtiss P-40 fighter aircraft under license for the Royal Air Force (RAF) actual producer Curtiss-Wright was already busy. North American stated that it was planning its own design instead of the competing product, which would make better use of the capabilities of the Allison V-1710 engine installed in the P-40 . This was followed by a British order for 320 machines of the still-to-be-developed NA-73, which was later increased to 620 units.

As well as the Curtiss P-40 by a 1150 hp paid twelve-cylinder - V-engine driven type Allison V-1710, completed the NA-73 its first flight on October 26, 1940. The NA-73 had a nozzle cooler with substantially reduced air resistance . The laminar wing used , however, did not play a decisive role in the aircraft's low air resistance, because at the high speeds the boundary layer always becomes turbulent. Rather, the low resistance was achieved through a high surface quality and profile accuracy, which also gave series machines almost the quality of wind tunnel models and left the point of turbulent flow separation further back. Accordingly, the NA-73, which was called the "Mustang" by the Royal Air Force, was much faster than the P-40.

The British Aircraft and Armaments Experimental Establishment in Boscombe Down (now MoD Boscombe Down ) tested the new type extensively and had a number of improvements introduced. In the case of the first aircraft delivered, the poor visibility when rolling on the ground was criticized. This was due to the steep angle of the fuselage, the long engine hood and the heavily braced three-part cabin glazing, which was nicknamed the "greenhouse". The view was later improved by a new plexiglass hood called Malcolm Hood, which replaced the middle section and which was named after its inventor Robert Malcolm.

Mustang I on a test flight

In October 1940, the Royal Air Force pre-ordered 300 Mustangs I; in July 1941 the USAAF followed suit with an order for 150 P-51s. Instead of machine guns, these were to be equipped with four 20 mm cannons, each with 125 rounds, since it was not yet clear in the US Army at the time whether the Mustang would establish itself as a hunter. It was not until the events after the USA entered the war and General Henry Arnold's commitment as Commander in Chief of the Air Force that the P-51 was officially introduced as a US fighter aircraft. As a result, in the summer of 1942, the first 57 aircraft produced, which were supposed to be delivered to the Royal Air Force, were requisitioned by the USAAF.

A total of 1200 pieces of the first series production P-51A were ordered in August 1942. Series production started in March 1943. Due to the production change to the next model, only 310 pieces of the A-model were made, 50 of which were sold to England. This version was armed with four M2 machine guns (caliber .50 BMG ) in the wings and had a maximum range of around 1200 kilometers. Even before this order, 500 machines were ordered as dive bombers , which later came into service under the designation A-36 ("A" for attack).

In use it turned out that the high-altitude performance of the Allison engine was unsatisfactory and the first samples did not convince as hunters. Therefore, from autumn 1942, tests began on the British high-performance Rolls-Royce Merlin engine in the aircraft. The promising results finally culminated in the P-51B model, which first rolled off the production line in June 1943 and of which almost 2,000 units were manufactured. As a drive of at served Packard built under license Motor Packard Merlin V-1650 , which reached 1650 hp takeoff power. With this configuration of an American aircraft design and an English engine, the performance parameters improved significantly and a powerful fighter aircraft was created. In addition to the good aerodynamics and the top speed of 700 km / h, the long range was particularly impressive, because the Packard-Merlin engine consumed just under 230 liters per hour with 100-octane fuel at a cruising speed of 420 km / h.

Drop tank under the wing

Only a few months later, the almost identical C version was rolled out, of which a total of 1,750 units were built in the new plant in Dallas. In addition to the existing internal tank with a capacity of 700 liters, a further tank with a capacity of 320 liters was installed in the fuselage behind the pilot in the later production process, which increased the range at cruising speed to 2000 kilometers. Although this had a negative impact on the stability, this was mostly insignificant, as this tank (as well as two drop tanks that reduce the speed) had flown empty on the mainland until it reached the operational area.

The main version and the most built version was the P-51D, of which almost 8,000 were built from the spring of 1944. The main changes were the installation of a new plexiglass hood - which significantly improved all-round visibility - and two additional heavy machine guns. 380 rounds were available for the inner MG pair, and 270 rounds per weapon for the two outer pairs. With an additional two drop tanks, each holding 110 gallons (415 liters) of fuel, a maximum range of 3300 kilometers was possible, which was by far the longest range of any single-engine Allied combat aircraft. This version was considered by many to be the best fighter aircraft of the Second World War.

Use in World War II 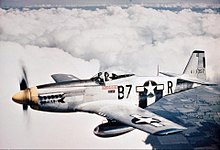 P-51D in action with drop tanks 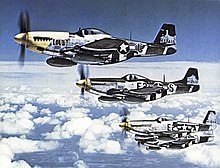 The first Mustangs entered service with the Royal Air Force in May 1942 and had their first combat missions in August. Due to the poor altitude performance of the original engine, the P-51 was initially not used as a fighter aircraft, but as a fast fighter-bomber and as a reconnaissance aircraft at low altitudes.

Only the B and C models, stationed in England from November 1943, were used as fighter planes. It was the first long-range USAAF escort fighters to escort heavy Eighth Air Force bombers to targets deep in the German Reich. Merlin Mustangs with their excellent flight performance were used in increasing numbers and almost completely displaced the Lockheed P-38 and Republic P-47 previously used as escort fighters from this role. The Mustang's main advantages were long range, high speed, and good maneuverability at high speed and at high altitude. In May 1944, the conversion to the improved P-51D began. With two drop tanks enlarged from 65 to 110 gallons, the P-51 were now able to reach any point in the German Reich.

During the Second World War, the Mustang was used almost exclusively as a fighter, fighter-bomber and reconnaissance aircraft, while the A-36 was also used as a dive fighter. Due to the numerical superiority and better training of their pilots, the Allies finally achieved air supremacy with the North American P-51 Mustang and other types of aircraft by the end of 1944 . In Europe alone, the P-51 completed almost 214,000 missions, in which they shot down almost 5000 enemy aircraft and destroyed 4,100 on the ground. The 8th US Air Force lost a total of 2200 P-51s in action (in combat and due to other causes, total losses). Some of the P-51 could be airworthy captured by the Germans and made airworthy again and were the attempt Association Ob.dL used.

In the US bomber offensive against Japan in 1944/45, Mustangs were also used as escort fighters for the Boeing B-29 . The Mustang was far superior to the less powerful opponents at high altitudes.

Use after the Second World War

In order to obtain a fighter aircraft with an even greater range, North American constructed the twin-engine fighter Twin Mustang, a two-seat twin-fuselage aircraft based on the P-51. It was a stand-alone development which, due to the obvious similarity, could be mistaken for the assembly of two Mustang hulls. The F-82 was later used in the Korean War as a long-range fighter and as a night fighter.

National China received USAAF P-51C / D in 1945, which were used in the Chinese Civil War until the withdrawal to Formosa .

With the introduction of the new classification system in 1948 by the United States Air Force , which emerged as an independent branch of the USAAF in 1947 , the P-51 was renamed the F-51. In view of the fact that new jet-propelled fighter aircraft such as the Lockheed F-80 or the Republic F-84 were in production , the F-51 was gradually handed over to the Air Force reserves , i.e. the Air National Guard and the Air Force Reserve Command . For the Korean War , however, the F-51 was largely reactivated because it was the only propeller-driven aircraft that was available immediately and in large numbers. In Japan, the USAF still had more than a hundred F-51s "in stockpile". Squadrons, which had meanwhile been assigned F-80 jet fighters, converted back to their old propeller guns. The Mustang was used for ground combat support with on-board weapons , napalm , bombs and missiles. However, the Mustangs suffered very high losses, so in April 1951, the month with the most losses for the Mustangs, 25 machines were lost to ground defenses. The USAF flew from July 1950 to January 1953 with the P-51 62,607, with the RF-51 10,570 missions (between December 1950 and February 1953) in Korea. 351 F-51s and 24 RF-51s were lost. The loss rate was thus 0.6% and 0.2%, respectively. The 300 operational losses of the F-51 are divided as follows: 194 through enemy action (172 of them through ground defense), 74 through accidents and 32 aircraft went missing. The RF-51 lost 22 aircraft in service, 19 of them due to enemy action. Here, too, the largest part, namely 17, fell victim to the ground defense. There was one accident and two missing RF-51s. 131 F-51 and 5 RF-51 pilots were killed, 133 and 10 pilots were missing, and 41 and 2 pilots were wounded.

Swiss P-51 in the museum

The Swiss Air Force (Flugwaffe) bought 130 used Mustangs from US stocks in 1948 at a price of 4,000 US dollars per machine. The Mustangs were supposed to close the gap by 1950 until the introduction of the first De Havilland DH.100 Vampire jet fighters . The powerful machines were initially very popular with pilots, as they could hardly be compared with the old Messerschmitt and Morane fighter planes. However, there were more and more accidents due to structural weaknesses and the wear and tear of the used machines. The last Mustangs were retired in 1957, but some found their way into museums and private collections.

Mustangs were used in many - especially Latin American - countries sometimes until the 1980s, for example in 1969 by El Salvador and Honduras in the so-called football war . The last Mustangs were scrapped in the Dominican Republic in 1984 . They were originally delivered to the Cubans in exile in 1960 , but were not used in their action in the Bay of Pigs . The last copies were bought by museums and private pilots. 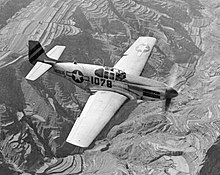 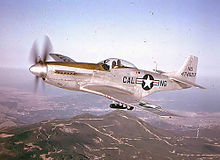 Based on the P-51, the North American F-82 was developed with a double hull.

Approval of the P-51 by the USAAF: