X-15 is a redirect to this article. For further meanings, see X-15 (disambiguation) . 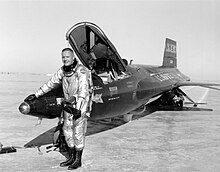 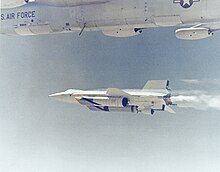 X-15 during a test flight

The US test aircraft X-15 was a rocket-powered experimental aircraft for high-altitude and high-speed flights. The company North American Aviation (NAA) built three copies of this pattern. This machine set new records for manned aircraft as early as the 1960s. A top speed of 7274 km / h ( Mach 6.72) and an altitude of 107.96 km were reached. The data collected served the US space program such as the Apollo program . Higher speeds and heights of manned aircraft were only achieved with the space shuttle from 1981.

The single-seat aircraft had a number of technical features to cope with the extreme flight conditions. The structure was made of titanium and steel with an outer skin made of Inconel-X , which can withstand temperatures of up to 650 ° C. The reason for this was that temperature resistance was a bigger problem than lightweight construction. The aircraft was launched from the air by a converted NASA B-52 bomber and landed on its own landing gear . In addition to the aerodynamic surfaces for control in the earth's atmosphere , a reaction control system was also built in to enable maneuverability outside the atmosphere.

The adjustable Thiokol single-chamber liquid rocket engine XLR99-RM2 from Reaction Motors (thrust: 254 kN (57,000 lbf) at sea level, 311 kN (70,000 lbf) at peak height) of the X-15A-2 consumed around 15 tons in just under 3 minutes Rocket fuel. This fuel consisted of ammonia and liquid oxygen as well as hydrogen peroxide to drive the high-performance turbo pumps that pressed this fuel into the combustion chamber. The rocket plane covered a distance of 450 km on a typical test flight. To prevent it from breaking in the air, the maximum loads of −3.0 g and +7.33 g were not allowed to be exceeded during the flight  . For the fastest flights, a white ablative heat protection was applied.

The rear undercarriage was designed in the form of runners due to a lack of space and to reduce weight . Otherwise, the design of the missile is similar in many respects to the German A9 , a manned version of the A4 , which is not surprising because the X-15 is based on the concept of a hypersonic research aircraft developed by Walter Dornberger for the NACA . Walter Dornberger was the military director of the Peenemünder V2 program.

After the “Research Airplane Committee” presented the project to twelve aircraft manufacturers on December 30, 1954, four companies - Bell Aircraft Corporation , Republic Aviation Company , North American Aviation and Douglas - were able to submit their designs for the three aircraft by May 9, 1955 . On December 6, 1955, the contract was awarded to North American Aviation, although their design was by far more expensive than that of the other manufacturers. One reason why they chose NAA was that they did not want to use the magnesium alloy Elektron , but the nickel-based alloy Inconel-X for the outer skin. In September 1956, NAA began building the three copies. The first mock-up was completed in December of the same year .

The first copy was rolled out on October 15, 1958 . The first test flight was undertaken on March 10, 1959, but still without separation from the carrier aircraft. As such, a converted B-52A and B-52B were used, which were called NB-52A and NB-52B after their modification . On June 8th of the same year, the first glide flight was carried out with the first engine-less specimen. On September 17, 1959, the second X-15 flew for the first time with rocket propulsion, but initially with two of the weaker Reaction Motors XLR-11 engine , but it reached a speed of 2242 km / h.

In the summer of the following year, the X-15 No. 3 was converted, the Reaction Motors XLR99 single engine was installed so that the aircraft could fly at speeds higher than Mach 4. After the conversion of the X-15 No. 3 the first two versions followed a little later. On November 15, 1960, the first flight with the modified X-15 followed.

After the second model crash-landed on November 9, 1962 due to an engine failure, it was decided to convert the X-15 No. 2 to the larger X-15A-2, which is 67 centimeters longer and because of the two additional drop-off external tanks was also much heavier. In June 1964 the first flight took place with the X-15A-2.

On November 15, 1967, the third X-15 lost its longitudinal stability when re-entering from a height of about 80 km and broke under the aerodynamic forces, which were ± 15 g, significantly more than the X-15 could withstand. The pilot, Major Michael Adams , was killed. It was the 191st flight of an X-15.

The two remaining machines are on display at the Smithsonian Air and Space Museum in Washington DC and the United States Air Force Museum in Dayton, Ohio.

In total, the project, including hardware and software costs, cost 300 million US dollars . A further developed version X-15-3 with delta wings and ramjet propulsion proposed by NAA was not implemented.

As defined by the US Air Force, eight space travelers

From July 17, 1962 to August 21, 1968, 13 flights reached an altitude of over 50 miles (approximately 80 kilometers). According to the definition of the US Air Force, space begins there, so that the eight pilots on these flights were considered space travelers. The five military pilots Robert Michael White , Robert A. Rushworth , Joe Engle , William John Knight and Michael J. Adams received astronaut wings as an award from the US Air Force . For the three civil pilots, this was not made up for until August 24, 2005. Bill Dana received the award himself, the late pilots Joe Walker and John B. McKay were represented by relatives.

According to the international definition, only a spaceman

The X-15 pilots Neil Armstrong and Joe Engle later switched to NASA's space program and achieved space pilot status there. Armstrong was the first person to step on the moon, and Engle commanded two flights of the space shuttle . 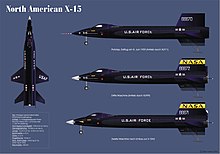