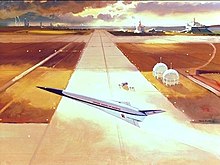 The Rockwell X-30 National Aero-Space Plane (NASP; German: nationales Luft-Weltraum-Flugzeug) was an attempt by the US to build a spaceplane that would go into orbit with just one air-breathing stage . The project was discontinued before the first aircraft was built.

The NASP emerged from a DARPA project called Copper Canyon , which ran from 1982 to 1985. In 1986, President Ronald Reagan called for this project to be started in his State of the Union address . The project was funded by NASA , the USAF , USN, and the United States Department of Defense . McDonnell Douglas , Rockwell International and General Dynamics applied for the development contract for the air-breathing supersonic aircraft . Rocketdyne and Pratt & Whitney applied to develop the engines.

In 1990, the companies joined forces under the leadership of Rockwell International to overcome the massive technical and financial obstacles. The development of the X-30 continued until 1993 when it was finally discontinued for cost reasons.

The X-30 was primarily a highly integrated engine. The front fuselage, shaped like a scoop, compressed the air before it entered the engine. The rear fuselage section formed a kind of nozzle to expand the exhaust jet again. The engine was designed as a ramjet engine with supersonic combustion (English scramjet ). Up to this point, however, a scramjet had never been successfully tested.

From an aerodynamic point of view, the X-30 was designed as a wave rider . Most of the buoyancy should come from compression buoyancy . The wings were only designed as small fins to influence the flight attitude. This design would have been very efficient in high-speed flight, but would have made take-off and landing extremely complicated.

It was assumed that the temperature would be up to 980 ° C on most parts of the surface of the X-30 and up to 1,650 ° C on leading edges and on the engines. This fact made it necessary to develop new lightweight and heat-resistant materials. These new materials included gamma and alpha titanium aluminide , reinforced carbon carbon and titanium matrix composites with silicon carbide fibers . The McDonnell Douglas team used titanium matrix composite to build a part of the fuselage called Task D as a model. A tank for deep-frozen hydrogen made from CFRP was then integrated into this part of the body . Shortly before the end of the program in 1992, Task D was successfully tested at mechanical loads and 820 ° C.

Although significant advances had been made on structural and propulsion problems, the NASP still had formidable hurdles to overcome. The Department of Defense requested that the X-30 should be able to carry a crew of two and some payload. As a manned spacecraft, however, the X-30 would have required avionic instruments, environmental controls and extensive safety equipment, which would have made the spacecraft significantly heavier and would have exceeded the capabilities of the technology demonstrator. Therefore, the project was canceled and the much smaller and less powerful X-43 was created based on the X-30 .

During the development work on the X-30, it also became apparent that the speed of Mach 25 required for launching into an earth orbit could not be achieved with the scramjet alone.