The Boeing X-43 is an unmanned , lifting body designed test aircraft for the US space agency NASA .

The X-43A is mounted on a modified Pegasus rocket under the right wing of a B-52 B. 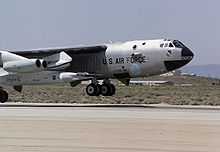 After the DARPA in collaboration with Rockwell , the project X-30 NASP (National Aerospace Plane) had ended unsuccessfully in 1993, NASA initiated seven years later with the program "Hyper-X" the development of the X-43A, an unmanned and hypersonic vehicle. The three built copies (called Hyper-X 1 to 3) were designed for single use. The aircraft is powered by a ramjet engine with supersonic combustion.

The 4.6 × 1.5 meter supersonic aircraft, which was designed for speeds of up to Mach  10, was saddled to a modified, single-stage variant of the Pegasus rocket . The aircraft was set down from a converted Boeing NB-52 at an altitude of 12,200 to 13,000 meters. The so-called HXLV- Pegasus variant was retrofitted with special control surfaces and stabilizers. This brought the 1270 kilogram aircraft further to a greater height (up to around 95,000 feet or 30,000 meters) from Edwards AFB in California, USA.

The first unsuccessful test of the Hyper-X 1 was carried out on June 2, 2001. The second test of the Hyper-X 2 was successfully carried out on March 27, 2004 off the coast of California . After the ramjet engine had burned for eleven seconds, almost seven times the speed of sound (precisely Ma = 6.83) or hypersonic speed was reached - a new record for aircraft with air-breathing engines . A height of 24 kilometers was reached and a distance of 24 kilometers was covered. After the ramjet engine had finished its work, the flight operators were then able to control the aircraft in gliding flight until it crashed into the Pacific. The third and thus the last example of the Hyper-X 3 demonstrator was able to reach a record speed of Mach 9.66 (10,617 km / h) and an altitude of 34 kilometers on November 16, 2004. The supersonic aircraft held out the record speed for about ten seconds. The engine worked for around twelve seconds, after which the ramjet engine melted due to the lack of active cooling of the engine due to the design. Then it carried out preset maneuvers for a few minutes before crashing into the Pacific as planned.

The X-43A (engl. By a ramjet scramjet ) is driven, which operates in the supersonic range. Unlike conventional jet engines , a ramjet engine has no rotating parts. The inflowing air is not compressed by turbo compressors , but rather by hitting the moving aircraft in combination with the convergent inflow area. At the point with the smallest cross-sectional area of ​​the engine , fuel is injected and ignited, which suddenly heats the air flowing past so that it expands, is ejected completely backwards from the front by the airspeed-related dynamic pressure and thus generates thrust. Hydrogen was used as fuel . Because the combustion takes place at supersonic speed, the technical requirements increase.

After the end of the X-43 project, the US Air Force continued its research in the hypersonic range with the X-51A . The first flight took place on May 26, 2010.