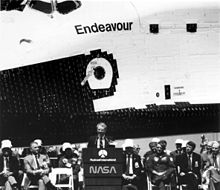 Rollout of the Rockwell-built Endeavor

The Rockwell International Corporation was from 1973 to 1996 one of the leading US corporations for aerospace engineering. His best-known products include the heavy long-range bomber 1-B of the US Air Force , the Space Shuttle of NASA , the Global Positioning System (GPS) and the German -American experimental aircraft X-31 .

The origins of the company go back to Willard Rockwell , who graduated from the Massachusetts Institute of Technology as an engineer in 1908 and initially developed truck axles for army vehicles from the First World War . In 1919 he founded the Wisconsin Parts Company and in 1925 he became president of the Equitable Meter and Manufacturing Company in Pittsburgh , Pennsylvania , later the Rockwell Manufacturing Company . After several company acquisitions, W. Rockwell formed the Rockwell Spring and Axle Company in 1953 , which he renamed the Rockwell Standard a few years later . This merged in September 1967 with North American Aviation , an aircraft manufacturer founded in 1928 ( B-25 , P-51 , F-86 , F-100 etc.) to form North American Rockwell (NAR) . At the time, NAR was building e.g. As for the US space agency NASA , the command and service module (CSM) of the Apollo spacecraft and for the US Air Force, the two-seat STOL - Turboprop engine OV-10 Bronco .

In 1969 NAR and Miehle-Goss-Dexter merged, the world's largest manufacturer of printing machines since the 1950s; In February 1973, NAR took over the avionics manufacturer Collins Radio , who had already equipped Richard Evelyn Byrd's second Antarctic expedition with radio equipment in 1933 and in 1969 supplied the transmission technology for the live television images of the first manned moon landing with Apollo 11 .

Also in 1973 North American Rockwell and Rockwell Manufacturing became the technology group Rockwell International . The following years are among the most successful in the company's history: Rockwell has been developing the B-1 bomber for the US Air Force since the late 1960s and produced 100 machines from 1982 to 1988. In 1972, the contract was awarded to build the space shuttle .

At various times, Rockwell International consisted of these divisions:

At the height of diversification around 1982, Rockwell International, through its subsidiaries, employed more than 86,000 people worldwide, over 60% of whom were engineers. The company motto also dates from this time: where science gets down to business

In the early 1980s, Rockwell International began its own reorganization and liquidation. The General Aviation division was spun off to Gulfstream in 1980 , and the Sabreliner Jets to the Sabreliner Corporation in July 1983 . This decision was accelerated from 1986 by the political opposition of the US Congress to the Strategic Defense Initiative (SDI) proposed by Ronald Reagan . As a result of the reduced opportunities for further billion -dollar projects, the aerospace, aerospace and military technology divisions were sold to Boeing for 3.2 billion US dollars in December 1996 . In 1997, the previously unsaleable automotive sector was spun off under the name “Meritor”, which, after another merger , trades as ArvinMeritor . That left Rockwell International only divisions that actually have nothing to do with each other. Therefore Rockwell International was split into two successor companies. Today only the independent successor companies Rockwell Automation in Wisconsin ( automation technology , drives, gears , software) and Rockwell Collins in Iowa ( avionics ) exist with the name component Rockwell .

The subsidiary Rockwell Semiconductor (now Conexant ) also became known through the license replica of the microprocessor MOS Technology 6502 , which was also used in modified form as 6510 in the Commodore 64 and the in-house development of the first fully integrated chipset for transmission speeds of up to 14.4 kbit / s for modems and fax machines.