Apollo was a spaceship developed by North American Aviation as part of the Apollo program in the mid-1960s . It consisted of two components: the command module (CM) and the service module (SM). The combination (CSM) was only separated shortly before re-entry into the earth's atmosphere . Only the CM with the three astronauts on board was equipped with a heat shield and equipped for re-entry into the earth's atmosphere and a splashdown .

The Apollo CSM spacecraft was launched into orbit by Saturn launch vehicles .

The CM had a mass of 5900 kg, a height of 3.23 m and a diameter of 3.91 m. In addition to numerous technical systems, it contained the astronauts' lounge area. When they returned from space, it served as a landing capsule.

Stabilization chutes ( drogue chutes ) and three large main parachutes were housed in the front part . The latter opened after re-entry at a height of 2.5 km. Two umbrellas were sufficient for a safe dive. At Apollo 15 , one of the three screens failed without causing damage or injury. Furthermore, two control nozzles of the attitude control system for re-entry as well as the coupling system and the hatch for the lunar module were installed in the upper area . In addition, there were antennas and signal lights that made it easier to recover at sea, as well as inflatable balloons that set the system upright if the landing capsule floated with the tip down after the ditch.

Sectional view of the Apollo-CM

In the middle part of the spaceship there was a pressure-resistant cabin for the astronauts. This housed the main instrument panel for the control and steering of the spaceship , life support systems and some material lockers. There were five small windows and a hatch on the side for entry and exit. The life support systems controlled the cabin atmosphere and kept the temperature at 22 ° C. During the flight, the cabin air consisted of pure oxygen at a third of the pressure on earth. Only during the start-up phase, after the painful findings from the disaster with Apollo 1 , 40% nitrogen was added. On board were also maps of the moon and the earth , star maps for navigation and orbit maps for each of the individual phases of the mission.

The CM offered each astronaut about two cubic meters of space.

In the stern of the CM, ten additional control nozzles of the attitude control system for re-entry, their fuel and helium and water tanks were housed. The structure here consisted of triangular ribs that were designed to be deformable on the side opposite the parachutes and, in the event of a landing on land, acted as a crumple zone and thus cushioned the impact.

Instruments of the CM

Most of the instruments were on the main control panel , across from three couches for the astronauts. The life support systems were on the left side of the module, the disposal systems on the right side. The astronauts were able to control and stabilize the spaceship using hand controllers ( flysticks ) attached to two of the three couches . The main control console was divided into three areas. The controls were designed in such a way that the astronauts could operate them with gloves.

The CM was equipped with its own computer, the Apollo Guidance Computer, and two operating consoles for independent navigation. The sextant was connected directly to the computer via an angle encoder, which differed from the design of normal sextants. (Without this sextant, Apollo 16 would have got into serious trouble, as the electronic navigation system had failed on this mission.) The radio communication took place in the S-band , in particular via the large, swiveling, clover-leaf-shaped directional antenna at the rear of the service module. In addition, a VHF connection with an omnidirectional antenna was available for the landing and recovery phases.

The landing capsule was equipped with an ablative heat shield made of epoxy resin for re-entry into the earth's atmosphere at about escape speed . 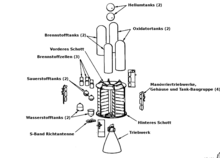 Exploded view of the service module

The SM contained the systems that were needed for a longer stay in space and for maneuvering. It consisted of a cylindrical , 7.50 m long and 3.91 m diameter construction. It contained electrical life support and communication systems. It was divided into a central section and another six outer sections. This contained tanks for propulsion, attitude control, power generation and life support systems as well as the control engines and the main engine. On the outside there are four modules, each with four were steering jets , navigation lights , three antennas and four parabolic antennas for communication and radar - transponders .

Connection of the CM with the SM at Apollo 6

The six sectors were occupied as follows (counting starting at the top left and counterclockwise, viewed from the CM):

All tanks were made of titanium sheet 1.36 mm thick.

The electrical system was mainly on the front bulkhead. Overall, the arrangement of the systems took the center of gravity into account. Since it was not possible to achieve complete compensation, the engine was installed in such a way that the zero position deviates by 1.5 ° from the geometric axis.

Scheme of the drive

The engine of the SM, the AJ10-137 developed by the Aerojet-General Corporation , generated a thrust of 97.5  kN and was designed for a maximum of 50 ignition processes. As fuel was aerozine 50 used a mixture of 50% hydrazine and 50% unsymmetrical dimethylhydrazine as oxidizer was dinitrogen tetroxide is used, a storable hypergolic propellant combination. Ignition in the strict sense of the word by means of sparks did not take place; the two liquids ignite on contact with one another. The engine had no pump ; rather, the fuel and the oxidizer were forced out of their tanks into the combustion chamber using helium as a propellant . The construction became simple and reliable at the expense of performance. The entire engine and the engine nozzle were 3.90 m long and weighed 293 kg together. The nozzle alone was 2.80 m long and had a diameter of 2.10 m.

Two fuel tanks with a total capacity of 7.2 t and two oxidizer tanks with a total capacity of 11.4 t (see above) supplied the engine. These fuels alone made up about 75% of the total mass of the SM. There were two spherical helium tanks in the middle of the module for pumping compressed gas. Two further tanks with a volume of 144 l each provided the oxygen for the fuel cells and life support. There were also two hydrogen tanks with a volume of 13 l each for the fuel cells. A defective heating element in one of the oxygen tanks caused the accident on the Apollo 13 mission . It had previously been used in a spaceship, but was removed before the launch of the earlier spaceship and, despite a defect, was used on Apollo 13.

Power supply of the CSM

In addition to electrical energy , three alkaline fuel cells also provided heat and drinking water. Furthermore, silver oxide-zinc batteries delivered 1.5 kW of power and ensured the supply during re-entry and landing. Two further silver-zinc oxide batteries in the CM delivered 28 watts and released the explosive bolts for the separation of the third rocket stage, for the separation of CM and SM and that of the rescue rocket (LES). They were also responsible for deploying the parachutes. Overall, the CSM required an electrical output of 2000 watts.

In order to take into account the significantly changed requirements for the flight to the Skylab space station and in particular the fact that the CSM remained docked at the station for several months, the last four CSMs CSM-116 to CSM-119 were extensively modified and the following equipment added or added:

A CSM could have been further modified for a rescue mission and equipped for five astronauts. The rear cupboards would have been exchanged for two more couches and the life support system would have been added accordingly. A two-man crew could have flown to Skylab and picked up the crew.