Hydrazine is a very toxic inorganic chemical compound made from nitrogen and hydrogen with the empirical formula N 2 H 4 . It is a colorless, oily liquid that smells like ammonia and smokes in air. Hydrazine burns with a barely visible flame. It is usually sold as an aqueous solution or as hydrazine hydrate (H 2 N − NH 2 · H 2 O).

Technically, there are several ways to synthesize hydrazine:

Excess ammonia gas is pressed into the solution at high pressure, which heats up to approx. 400 K, and the reaction continues to form hydrazine.

With acetone, hydrazine forms a ketazine, the condensation product of a ketone with hydrazine.

The ammonia-hydrogen peroxide mixture reacts with the ketone to form a ketazine and water .

As in the Bayer process, the ketazine obtained can easily be converted into hydrazine by hydrolysis .

The advantages over the Raschig and Bayer processes are lower energy consumption and the absence of chlorides .

The mechanistic procedure is the same as that of the Hofmann rearrangement : First, formation of the amidate ion by De protonation , then electrophilic halogenation of the amidate ion, followed by the second deprotonation. The chloramidation spontaneously breaks down to acyl nitrene and a chloride ion. The acyl nitrene rearranges to form isocyanate , which, with the addition of water, produces the inconsistent carbamic acid , which then breaks down to carbon dioxide and hydrazine. The resulting carbon dioxide is absorbed by the sodium hydroxide solution with the formation of sodium carbonate .

Pure hydrazine can disproportionate explosively to ammonia and nitrogen when heated .

Concentrated solutions are highly explosive in connection with oxidizing agents , sometimes hypergolic . Hydrazine can also be catalytically decomposed; this is used in technology, e.g. B. in correction or emergency engines.

Compared to very strong bases (pK b ≪ 0), hydrazine also functions as an acid. By reacting sodium hydride or sodium amide with hydrazine, sodium hydrazide which is extremely sensitive to oxidation and in which hydrazide anions are present (N 2 H 3 - ) can be obtained. Conversely, hydrazide ions react practically completely with water to form hydroxide ions and hydrazine.

Due to its highly reactive properties, hydrazine is mainly used as a rocket fuel , which forms a hypergolic fuel combination with the oxidizers dinitrogen tetroxide or nitric acid . Hydrazine is not only used pure, but also mixed together with 1,1-dimethylhydrazine with the oxidizers mentioned above. Known mixtures with different concentrations of the two components are Aerozin 50 and UH 25 . 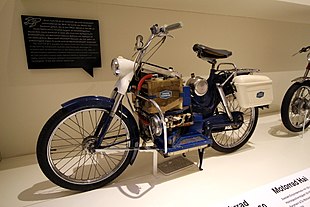 The Puch MS 25 developed by Karl Kordesch in the 1950s with a hydrazine-air fuel cell .

Hydrazine can be used in suitable fuel cells, the hydrazine fuel cells , to generate electrochemical electricity. The storage of the liquid hydrazine hydrate can, compared to the gaseous hydrogen, take place in tanks of any shape, since these can be designed for lower pressures. Due to the toxicity of hydrazine, the use of hydrazine fuel cells is only conceivable in special areas such as space travel or the military .

Hydrazine is used in correction engines, where it is catalytically decomposed in a strongly exothermic reaction into gaseous nitrogen and hydrogen, for example also in the Voyager probes . According to company information from 2018, more than 500 hydrazine-powered thrusters are working in space, and they are also used in Ariane 5 .

In single-jet aircraft such as the F-16 , hydrazine and a catalytic decomposer are used as an emergency power generator.

In submarines , e.g. B. in the submarine class 214 , a hydrazine decomposer is used as an integral component of a rescue system called RESUS (REscue system for SUbmarineS) and which, with the help of nitrogen pressure, enables the submarine to emerge even when other systems Have failed.

Diluted hydrazine solutions are also used as reagents in the laboratory and for deoxygenation (liberation of oxygen) from boiler feed water in steam power plants. It is used both for removing the residual oxygen after degassing the feed water, for protection against possible minor oxygen ingresses in the area of ​​the condenser and for catalytic oxygen removal from the make-up water. The advantage of hydrazine is that only nitrogen and water are produced in this reaction. In addition to deoxygenation, the pH value in the water-steam cycle is also increased .

In chemical synthesis , hydrazine is mainly used as a strong nucleophile (so-called alpha effect ) and as a reducing agent for carbonyl groups ( Wolff-Kishner reaction ) or as a hydrogen source in catalytic hydrogenation .

Hydrazine is used as a storable fuel in many rockets, satellites and spacecraft. This can create a significant environmental hazard if a missile launch fails. If a satellite has already reached orbit , due to the high speed of at least eight kilometers per second and the unfavorable aerodynamic conditions in the case of the spherical tanks, it is practically impossible for them to hit the ground, as they burn up due to the high kinetic energy in the atmosphere . The hydrazine decomposes in the process.

No hydrazine contamination was found in the Challenger disaster . After a successful shuttle landing, one of the first safety measures was always to examine the stationary orbiter for leaking hydrazine. Only if this test was negative were other auxiliary vehicles, e.g. for cooling, allowed to approach the shuttle.

During the 2003 Columbia disaster, media warned of possible hydrazine contamination by NASA, and in fact, a largely intact Columbia hydrazine tank was found in 2011.

The shooting down of the American USA-193 satellite was justified in the media with the threat posed by the hydrazine on board.

Hydrazine has been included in the SVHC candidate list (list of substances of very high concern) since June 2011 because of a suspected carcinogenic effect . Initially, this only has an impact on specific information requirements in the supply chain.