Catalytic hydrogenation was developed in the 1890s by Paul Sabatier , who received the Nobel Prize for it, in collaboration with Jean Baptiste Senderens in France.

Hydrogenation of a double bond

Due to the high stability of the hydrogen molecule (the dissociation - enthalpy .DELTA.H 0 for the reaction H 2 → 2H * is 434 kJ · mol -1 ) are required for the hydrogenation is usually a catalyst . The hydrogen molecule binds as an intermediate to the catalyst metal atom and the bond between the two hydrogen atoms is weakened, ie it experiences an electron deficiency and can now interact with an electron-rich multiple bond. The actual hydrogenation takes place when two hydrogen atoms are formally transferred from the catalyst-hydrogen complex to the corresponding multiple bond. The oxidation numbers of the affected elements are reduced by one.

The homogeneous catalytic hydrogenation , for example with the Wilkinson catalyst , is mainly used for the hydrogenation of alkenes with hydrogen .

By splitting off a labile ligand, hydrogen is added in a subsequent step with oxidative addition. The alkene (or olefin) then first coordinates on the metal and then reacts with insertion into the metal-hydrogen bond. By reacting with the second bonded hydrogen, the alkane is released with reductive elimination and the original catalytically active complex is recovered. 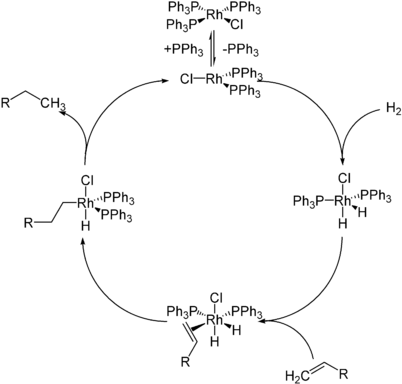 Catalytic hydrogenations with hydrazine , cyclohexadienes or formic acid as the hydrogen source are also of practical importance, especially on a laboratory scale . With these methods, with nitrogen for hydrazine, benzene for the cyclohexadienes and carbon dioxide for the formic acid, thermodynamically very stable compounds are formed, which provide the driving force.

Alkenes and alkynes can be converted into alkanes and, in the case of alkynes, also selectively into ( E ) - or ( Z ) -alkenes. However, functional groups containing heteroatoms can also be catalytically hydrogenated, e.g. B. nitro compounds or imines to amines .

Numerous substances react with the active centers on the catalyst surface and partially or completely block them. Such “catalyst poisons” are often responsible for the failure of catalytic hydrogenations. On the other hand, the targeted poisoning of a catalyst can be used to increase its selectivity (e.g. Lindlar catalyst ). Classic catalyst poisons are sulfur-containing compounds ( thiols ), in which the poison effect increases with the length of the alkyl chains. In principle, the catalyst poisons can be divided into three groups:

In the hydrogenation of alkynes , the triple bond initially forms a double bond, which can be in the ( E ) or ( Z ) form. One or the other stereoisomer can preferably be obtained with suitable catalysts . Usually the alkenes are rapidly further hydrogenated to the alkanes; with special catalysts ( Lindlar catalyst ) the hydrogenation can be stopped at the alkene stage.

The catalytic hydrogenation of alkenes to alkanes, for example fat hardening , which is carried out on a large scale, is much more important, particularly on an industrial scale, than the hydrogenation of alkynes . Here, oily unsaturated fatty acid esters are converted into saturated fatty acid esters, which have a significantly higher melting point. This is an important step in margarine production (see section below ).

Depending on the steric hindrance, the catalytic hydrogenation is easy and possible at normal pressure and room temperature or requires more drastic conditions. Monosubstituted olefins are easy to hydrogenate, and olefins are then much more difficult to hydrogenate as the number of carbon substituents increases.

In the laboratory, palladium, coated on activated carbon, and hydrogen from a pressurized gas cylinder are usually used for catalytic hydrogenation. In technical chemistry, more optimized processes are used here. The palladium catalyst applied to activated charcoal is commercially available and, depending on quality and thus also price, contains 1-10% palladium in an oxidation state of Pd (II) and, in the case of complex ligands such as nitro groups, has to be hydrogenated for palladium before the actual hydrogenation (= reduced to palladium (0)).

Hydrogenation of other multiple bonds

Hydrogenations as a method of removing protecting groups

Due to the often mild conditions, catalytic hydrogenation is also suitable for removing protective groups . Particular mention should be made here of the benzyl groups, which protect alcohols or carboxylic acids in the case of benzyl ethers and benzyl esters, or the benzyloxycarbonyl group or also Z group (Cbz) in peptide chemistry .

Hydrogenation is also used in the fat hardening of vegetable oils for the production of margarine ( Wilhelm Normann , 1901). In the process, double bonds in the fatty acid chains of the fat molecules are saturated with hydrogen. Since the compounds without double bonds have a higher melting point, a solid fat is obtained from the liquid oils. The hydrogenation takes place over nickel as a catalyst at 120 to 180 ° C and a hydrogen pressure of 6 to 7 bar. Incomplete hydrogenation contributes to the formation of unwanted by-products ( E ) -fatty acids ( trans -fatty acids). These are suspected of increasing the risk of cardiovascular diseases. Optimized hydrogenation processes can now reduce the formation of these undesirable by-products to a few percent.