Vegetable oils (or vegetable oils ) are made from oil plants derived fatty oils ( lipids ), unlike the essential oils that contain no fat and evaporate leaving a residue.

Vegetable oils contain different from animal oils and fats, no cholesterol , but instead, up to 65% linolenic acid and a lot of vitamin E . The distinction to the vegetable fats is the flowability , vegetable oils are liquid at room temperature (approx. 20 ° C).

Vegetable oils have been part of human diet and culture for thousands of years. Poppy seed, canola , flaxseed , almond oil , sesame seeds, safflower and cottonseed been since at least the Bronze Age in the Middle East and Central Asia used. The Phoenicians brought in 2000 BC The olive tree from the Middle East to Greece . The Greeks then brought it to Italy, where it also played an important role with the Romans .

According to the Food and Agriculture Organization of the United Nations (FAO), around 173 million tons of vegetable oils were produced worldwide in 2014 .

The following table gives an overview of the production of the 13 most important vegetable oils worldwide.

For the production of vegetable oils, see oil mill .

The vegetable oils are obtained through various processes:

Vegetable oils often contain a higher proportion of unsaturated fatty acid residues than animal fats , which is why trans fatty acids can be formed when heated to a great extent .

The vegetable oils differ in a number of properties due to their different composition. These are determined with a series of parameters ( fat ratios ). Various contaminations are also measured.

Hardening oils are often referred to as drying oils and occasionally as oxidizing , crosslinking or resinifying oils . The term “drying” does not mean evaporation, but the thickening (“resinification”) of the oil caused by oxidation with oxygen and subsequent polymerization ( crosslinking ) of the unsaturated fatty acids .

In connection with pigments , drying oils are used as oil paints and with the addition of resins as oil varnishes . Half oils and frequently also other oil paints are solvent added that dilute the oil and improve the processability. In this case, the evaporation of the solvent results in the physical drying of the paint in addition to the chemical crosslinking of the oil.

Drying oils harden completely. Depending on the layer thickness and the type of oil, the time it takes for it to harden is between a few hours, several months or years. Some oils, such as linseed oil, require a certain amount of light to harden. In complete exclusion of light, such as inside closed cupboards or in the rebates of windows and doors, the oil gels, but often does not harden completely.

Hardening oils are used in wood preservation and many other areas as binders for impregnation , painting media and other coatings as well as for putty , filler and plastics such as linoleum . Natural and artificial resins such as alkyd resin can usually be mixed with oils and oil paints in any ratio . Resins are sometimes referred to as modified oils .

In addition to linseed oil, which has been used in craftsmanship for centuries, many other oils are also used for wood treatment, which, such as wood oil and stand oil, offer better weather resistance or, such as walnut oil , soybean oil , sunflower oil and tall oil, dry more transparently and do not yellow as much as linseed oil.

The networking takes place in two phases. In the first stage, the oil absorbs a larger amount of oxygen and increases in volume. When storing hardening oils, there should only be a small volume of air in the container above the oil so that the oil does not gel due to the incipient crosslinking. In the second stage of crosslinking there is a decrease in volume. This can cause cracks in the paint layer.

The spreading value describes the flow of an oil, it is especially important when mixing oils.

At elevated temperatures and long storage times, the quality of vegetable oils decreases, some of the triglycerides decompose and “free fatty acids” are formed. This undesirable aging process can be measured by determining the acid number .

Manufacturers use various organic seals to label oils that are made from organically grown fruits or seeds and to which no other additives or auxiliary materials have been added during processing . Refined oils do not meet these criteria.

The oil is first hot-pressed at temperatures of over 100 ° C. With chemical or physical refining , valuable secondary plant substances, taste characteristics and the typical color are lost. The refined oil is largely tasteless, light in color, long-lasting and universally applicable.

The raw material is cold-pressed; a small amount of heat during the pressing up to approx. 60 ° C is possible. Some of these oils are steamed to increase their shelf life . In steaming, as in refining, undesirable accompanying substances are reduced.

Cold-pressed oils are produced in mostly decentralized oil mills without the supply of heat, only through pressure or friction . The pressing is usually followed by a filtration . The oils contain all ingredients. These have a positive influence on quality criteria such as taste, smell, color and vitamin content.

Native oils are natural and cold-pressed without additional heat. (with olive oil also virgin ) The cold pressing without heat avoids oxidation. The oil is filtered. Neither oil nor raw materials are pre- or post-treated, for example by refining, steaming or roasting the seeds. All ingredients are retained. The distinct fruit or seed taste, smell and intense color are characteristic.

The seed is peeled off in peeling mills . The kernels are then processed into cold-pressed, native oil. Refining can be dispensed with. The oil obtained is a pure seed oil. As with the cold-pressed or native oils, the ingredients, flavors and vitamins are retained. The peeling reduces undesirable adverse effects on taste and cloudiness that emanate from the peel. 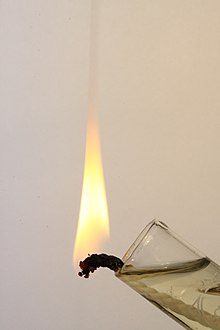 Vegetable oil burns on a wick with a sooty flame

Vegetable oils are used in a variety of ways, including as

Vegetable oils in the household