The Pacific yew ( Taxus brevifolia ) is a plant from the genus of yew ( Taxus ) within the family of yew plants (Taxaceae). 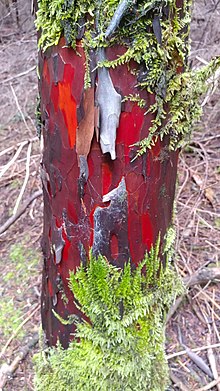 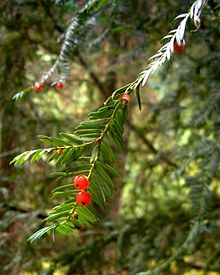 Branch with needles and aril

The Pacific Yew is an evergreen shrub or broad crown, often crooked burly tree is reached, the plant height of up to 15 (rarely 25) m and trunk diameter of 0.5 to 1.4 meters.

The scaly bark is purple to reddish. The bark of the branches is initially green, later red-brown.

The needle leaves , apparently arranged in two rows on the branches, are 8 to 35 millimeters long and 1 to 3 millimeters wide. They have a short handle with a length of 5 to 8 millimeters.

The seeds, which ripen in late summer to autumn, are encased in a red aril with a diameter of around 10 millimeters. 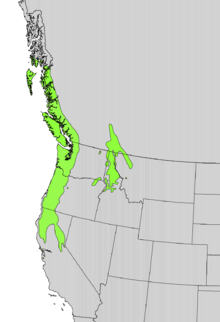 The Pacific yew tree is common in western North America . It occurs along the coast from southeast Alaska via the Canadian provinces of British Columbia and Alberta to central California (north of the Sonora Pass ). It occurs in the western US states of Montana , Oregon and Washington. It penetrates east to Idaho . It thrives at altitudes from 0 to 2,100 meters. Taxus brevifolia thrives best in damp and shady locations.

Taxus brevifolia was rated “Near Threatened” by the IUCN in 2012 . The stocks are decreasing. In addition, it is one of the slowest growing trees in the world. 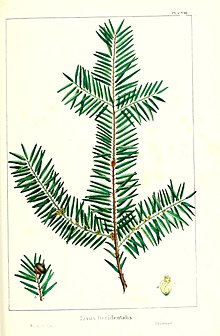 Since 1980 the Pacific yew tree has been known for its ingredient paclitaxel , an important drug in the treatment of various cancers such as breast cancer and ovarian cancer . Isolation of active substances from their bark (which kills the tree) is therefore hardly possible on a large scale. It would take six 100-year-old trees to produce enough paclitaxel to treat a single cancer patient. Paclitaxel can now be obtained semi- synthetically from cultivated specimens of the much more common European yew tree .