The yew trees ( Taxus ) form a genus of plants in the yew family (Taxaceae). The ten to eleven species are mainly found in the temperate areas of the northern hemisphere ; the European yew ( Taxus baccata ) is the only species native to Europe. 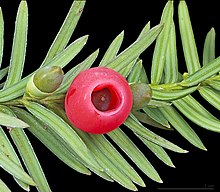 The red seed coat envelops the seed like a cup, here on the European yew tree ( Taxus baccata )

Yew species are evergreen shrubs or small to medium-sized trees . Young twigs initially have green to yellowish-green bark ; some bud scales can be seen at the bottom. Later the bark turns reddish-brown, a scaly, reddish-brown bark develops on older branches .

The needles are arranged in a spiral on the branch, but are parted so that they appear to be arranged in two rows. The straight, flexible needles can be straight or curved. They end in a small attached but not piercing point. The central vein protrudes on the top of the needles, on the bottom there are two light stripes with the stomata .

Yew species are usually dioeciously separated ( dioecious ): Male and female flowers are on separate plant specimens, occasionally they are single-sexed ( monoecious ). The male cones are spherical and yellowish. They have four to 16 sporophylls , each of which has two to nine sporangia.

The seeds ripen in the year of fertilization . Female plants produce red "fruits" in autumn that contain a single seed in the middle . The red, fleshy tissue surrounding the seed - the seed coat ( arillus ) - does not develop from the seed coat ( testa), but from the stem area of ​​the ovule ( funiculus ). The cup-shaped aril shows different shades of red depending on the species. In this case one does not speak of a fruit (in the botanical sense), but of a seed coat (arillus), since by definition there can only be fruits in flowering plants .

The pollen spreads via the wind ( anemophilia ). The seeds are mainly spread by birds, which eat the fleshy seed coat and later excrete the seeds again ( endochory ). Germination takes place epigeously , there are two cotyledons.

Most species of yew, such as the European yew ( Taxus baccata ), contain very toxic ingredients such as taxin B. In particular, the Pacific yew ( Taxus brevifolia ) contains paclitaxel (Taxol), which is used to treat breast and ovarian cancer. Bark, needles and seeds are poisonous. However, the red seed coat does not contain any toxins. Cases of fatal poisoning by yew trees are known from humans, cattle and horses. The occurrence of ecdysterone has been described several times.

The yew species are mainly found in the temperate zone of the northern hemisphere. In the New World they still reach Mexico , Guatemala and El Salvador to the south . In Southeast Asia they are found in tropical mountain forests and cross the equator on Celebes . While they occur at lower altitudes in the north of their range, they reach altitudes of 3000 meters in the tropics.

The European yew ( Taxus baccata ) was originally widespread in Germany around the mountain regions. In 1568, Duke Albrecht informed the Imperial Council in Nuremberg that there were no more mature yew trees in all of Bavaria. The reason for this was that the English longbows were made from the wood of the yew trees . From Nuremberg , thousands of them were shipped to Antwerp as export hits in the past . The Paterzeller Eibenwald has been preserved as a small relic of the Eibenwald in the former monastery forest of Wessobrunn , as well as in the Eibenwald natural forest reserve in Gößweinstein . Other larger deposits are located in southern Lower Saxony near Bovenden north of Göttingen and in Thuringia in the Ibengarten near Dermbach in the Rhön , on Lengenberg west of Lutter (Eichsfeld) in the district of Heiligenstadt and in the nature reserve Dissau and Steinberg near Rudolstadt. The yew population on the Swiss Uetliberg is of European importance , where the city of Zurich even set up a yew nature trail.

Yew trees grow in the shrub layer of moist forests or form part of the crown layer.

Place names with the component “ib” refer to earlier yew trees, for example Unteribental or Unteriberg . 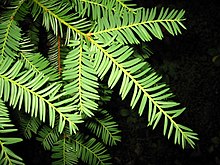 The genus Taxus was established by Carl von Linné . The scientific generic name Taxus is etymologically derived from neo-Persian taχš for " crossbow , arrow" and ancient Greek τόξον for " arrow bow " (for which yew wood is particularly suitable) with (perhaps underlying both words) Scythian * taχša- connected as well as with the indefinable old Indian tree name takṣaka- .

The systematic delimitation of the species and varieties within the genus is difficult and the authors sometimes differ. Aljos Farjon distinguishes between the following types:

There are numerous crossings . The best-known cross is the hybrid yew ( Taxus × media Rehder ), a cross between Taxus baccata and Taxus cuspidata that originated in Massachusetts in 1900 . Their broad, columnar cultivated form 'Hicksii' is used relatively often in parks and gardens.

The wood of the European and Pacific yew, which is seldom commercially available, is relatively hard, very tough and elastic. It is mainly used for woodturning work, as well as veneer, the construction of musical instruments and, since ancient times, for the production of bows .