The Uetliberg or Üetliberg (pronounced in Zurich German : [ yə̯tliˌb̥ɛːrɡ̊ ]; literary and Uto called) is the local mountain of Zurich and a popular recreation area.

As the northern end of the Albis mountain range, it rises to a height of 870  m above sea level. M. (Uto Kulm) via the Zurich quarters of Leimbach , Wiedikon , Albisrieden (with Triemli ) and Altstetten , on the south-west side the Reppischtal connects with Uitikon and Stallikon (with Sellenbüren ). Geographically, the summit of the Uetliberg belongs to the municipality of Stallikon.

The Uetliberg on an altar panel by Hans Leu the Elder

Already in the Bronze Age there was a refuge on the Uetliberg or in Celtic times an oppidum ; various archaeological finds such as ramparts and the prince's grave mound Sonnenbühl can still be visited today. From 1644 it was the location of a high watch .

Uotelenburg was first mentioned in a document in 1210 . In 1267 the people of Zurich allegedly destroyed the Uetliburg under Rudolf von Habsburg in the course of the Regensberg feud , but this is not considered historically secure. In 1750 the poet Friedrich Gottlieb Klopstock climbed the mountain.

In 1812 the Uetliberg watch was lifted.

The Alt Uetliberg is a small farm west below the former Annaburg . Mentioned in a document 400 years ago and probably much older, the mountain home is a witness of old farming culture on the Uetliberg. In 1984 the Canton of Zurich wanted to have the building demolished. A petition successfully opposed this. Today the buildings serve as a scout home.

A wooden ski jump was built in 1954 south of the Alt Uetliberg farmhouse . A hill record of 41.5 meters was achieved in the 1970s. Due to frequent lack of snow and decreasing public interest, the ski jump was demolished in 1994.

During the Second World War , the Uetliberg and Waldegg area was fortified with over 100 bunkered shelters as part of the first army position ( Limmat position ) .

In 1815 an inn opened in the former Hochwacht. In 1838 Friedlich Bluntschli acquired the summit area from his cousin Gerber Bluntschli; the Zurich architect Johann Caspar Breitinger built the first spa house for him. In 1840 Friedrich Beyel opened the Uetliberg guest house and spa. On March 8, 1840, the mountaineer, naturalist and Zurich secretary for the poor, Friedrich von Dürler, fell to his death after visiting the inn while descending. The Dürlerstein at today's Uto Staffel mountain restaurant is a reminder of him. In 1873 the hotelier Caspar Fürst bought the mountain inn.

The existing house was enlarged and a hotel was built north of it. In 1927 the Uetliberg Hotel was taken over by the City of Zurich and the ETH Zurich -Lehrwald was established. In 1935 the Niedermann brothers, both large butchers in Zurich, bought the hotel. In 1943 it was canceled. In 1973 the hotel came into the possession of the general contractor Karl Steiner. In 1983 the Swiss Bank Corporation bought the Uto Kulm mountain inn.

In 1999 Giusep Fry bought the hotel with a lookout tower. He then carried out various modifications that were declared illegal by the federal court . 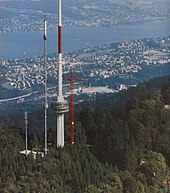 The television tower on an aerial photo from 1990

In 1953 the 75 meter high television tower was built and the first test broadcasts took place. In 1968 a 132 meter high transmission tower replaced the tower from 1953. In 1968 the Eichbühl cemetery , an important work of Swiss landscape architecture, was completed. The Zurich-Uetliberg railway company and the Sihltalbahn merged to form SZU.

The Uetlibergbahn Company was founded in 1872. The line opened in 1875. The line ran from Selnau station with a 40 ‰ gradient to the Uetliberg terminus, just below the summit. In 1920 the Uetlibergbahn was shut down and the operating company was liquidated. Two years later, the newly founded Zurich-Uetliberg railway company resumed rail operations. The railway line was electrified in 1923. The "Gmüetliberg" restaurant at the terminus was taken over in 1967 by the railway company. In 1970 the line was extended to Zurich main station.

In 2009 the Uetliberg tunnel was opened as a section of the A3 motorway .

The tourist development began in the 19th century with the Uetlibergbahn (opened in 1875) and the construction of various hotels and inns on the Uetliberg and the Albis chain . Today the traditional hotel Uto Kulm and the Uetliberg observation tower , which is open to the public all year round, stand on the summit of the Uetliberg .

The car-free Üetliberg is accessed by the S10 line of the Sihltal-Zürich-Uetliberg-Bahn , part of the Zurich S-Bahn network , which, as the steepest standard-gauge adhesion railway in Europe, runs from the main train station to the Uetliberg station a ten-minute walk below the summit. From the train station, the Uetliberg – Felsenegg planet path leads to Felsenegg , where the Adliswil – Felsenegg aerial cableway leads down to Adliswil .

Various hiking trails lead from the city of Zurich to the summit in around an hour:

The Uetliberg is particularly popular in winter, as its summit is often above the Zurich fog . In the past, the tram lines that go to the foot of the Uetliberg carried the sign “Uetliberg hell” in such inversion weather conditions . In winter, some of the hiking trails are used as toboggan runs .

Swisscom Broadcast operates an important telecommunications system on the Uetliberg (the Uetliberg television tower ) for the retransmission of radio and television programs.

The Uetliberg offers a view of the entire city and Lake Zurich , especially from the Uetliberg observation tower on the mountain top . In good weather, the view extends in the north to the Hohentwiel , from east to south in the Glarus , Graubünden and Bernese Alps . Further mountain ranges in Germany ( Black Forest ), France ( Vosges ) and Austria can also be seen. 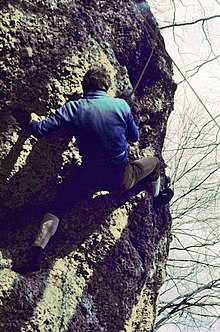 The approx. 20 meter high conglomerate rock faces of the Uetliberg are of particular importance for the development of Swiss sport climbing . In 1978 the climbing club Üetliberg KCÜ was founded, an informal association of mountaineers from Zurich and the surrounding area.

Members of the anarcho - Dadaist association, whose only statute was that all statutes should be repealed, were young sport climbers and top climbers who trained on the Nagelfluhfelsen of the Uetliberg. The initiator was mountain guide Walter Müller from the youth organization of the Uto section of the Swiss Alpine Club . Martin Scheel , Gabriel Huber, Thomas Müller and Roland Heer were among the founders, who then made a name for themselves as alpinists and pioneers of alpine sport climbing . You were some of the first free climbers in Switzerland. In order to be included in the KCÜ, only the 35 meter high tower on the Uetliberg had to be climbed free solo , i.e. rope-free, including overcoming the final overhang on the platform. The club was created in the context of the Zurich youth movement in 1980 . The political activism of the KCÜ members is often reflected in the names of their first ascent , for example the route Metzerstrasse 58/61 in the Jura. This was the address of an occupied house where some members lived. In the course of time, the informal KCÜ dissolved again.

Climbers still train on the Uetliberg today. By today's standards, however, the Uetliberg is only of secondary importance as a climbing area. There are twelve routes with levels of difficulty between 6a + and 7a +.

Uetliberg Kulm, from Stallikon seen from

After there were strong conflicts of interest between hikers and bikers, the City of Zurich developed a usage concept for the Uetliberg. The Triemli bike trail was opened in early summer 2005 . The mountain bike route begins at the television tower and leads over a length of 3.5 km and an altitude difference of 350 m to the SZU station Triemli . There is also the somewhat shorter Höckler bike trail to the southeast . At the same time, the transport of bicycles by rail was restricted. Overall, the concept led to a significant improvement.

Although the Triemli bike trail is very popular, there are also critical voices criticizing the loose, stony ground and the unfortunate choice of lines. The Züritrails association was founded at the end of 2010. The aim is to represent the interests of mountain bikers and to offer the city help with the maintenance and design of existing and new trails. A productive collaboration between the club and the city quickly developed, so that trail construction days were held in April 2011. At this first event, the Triemli bike trail was improved and its attractiveness increased with new elements and smoother curves for both beginners and professionals.

View from the Uetliberg

Both spellings Uetliberg and Üetliberg are common and in use. Uetliberg is official according to the national map and in the official survey .

The spelling Hüetliberg can also be found in some older documents .