Klopstock is a redirect to this article. For the poet of the same family name, see Margareta Klopstock (1728–1758). 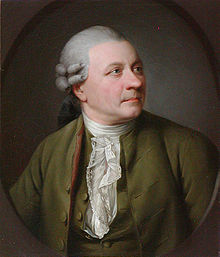 Friedrich Gottlieb Klopstock (born July 2, 1724 in Quedlinburg , † March 14, 1803 in Hamburg ) was a German poet . He is considered to be an important representative of sensitivity .

Klopstock's birthplace in Quedlinburg, photo from 1952

Friedrich Gottlieb Klopstock grew up as the oldest of 17 children in a pietistic family. His father, Gottlieb Heinrich, the son of a lawyer, was a prince-mansfeld commissioner and had leased the power of Friedeburg in the county of Mansfeld , so that Friedrich Gottlieb spent his childhood here from 1732 until the lease was given up in 1736. His mother Anna Maria had the Langensalza council chamberlain and merchant Johann Christoph Schmidt (born October 19, 1659 in Mühlhausen, † November 28, 1711 in Langensalza) as a father.

After attending the Quedlinburg grammar school, Friedrich Gottlieb Klopstock came to the Princely School in Schulpforte at the age of 15 , where he received a thorough humanistic education. Klopstock read the Greek and Latin classics: Homer , Pindar , Virgil and Horace . Here he also made his first own poetic attempts and wrote a first plan for the Messiah , a religious epic . 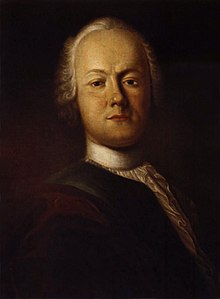 In 1745 he began studying Protestant theology in Jena , where he also wrote the first three chants of the Messiah , which he initially laid out in prose . After moving to Leipzig , the work was reworked in hexameters the following year . The appearance of the first parts in the articles in Bremen in 1748 caused a sensation and became the model for the Messiad literature of its era. In Leipzig, Klopstock also created the first odes . After completing his theology studies, he took a position as a private tutor in Langensalza (according to the custom of all theology candidates) . During the two years of his stay in Langensalza, Klopstock experienced the passionate love for the girl Maria-Sophia Schmidt, the intoxication of hope, the disappointment and finally the elegy of renunciation. This led to the fact that during these two years he composed the most beautiful of his earlier odes for his unapproachable lover.

The publication of the odes sparked a storm of enthusiasm among the opponents of the "reasonable" poetics of Johann Christoph Gottsched, which had prevailed up until then . It was the hour of birth of pure poetry.

Contacts were made with Johann Jakob Bodmer , who invited Klopstock to Zurich , where he traveled in 1750. After eight months he went at the invitation of King Frederick V of Denmark . With Friedrich's support he was able to complete his work. This granted him a life pension of 400 (later 800) thalers a year. He spent three years of his life in Denmark.

On June 10, 1754, Klopstock married Margareta (Meta) Moller , whom he had met in 1751 in Hamburg while passing through to Copenhagen. She died of a stillbirth on November 28, 1758. For thirty years Klopstock could not forget them and sang about them in his elegies. Only in old age (1791) did he marry Johanna Elisabeth Dimpfel from Hamburg . von Winthem (1747-1821), who was a niece of Meta Moller.

From 1759 to 1762 Klopstock lived in Quedlinburg , Braunschweig and Halberstadt , then traveled to Copenhagen , where he stayed until 1771 and exerted a great influence on the cultural life in Denmark. In addition to the Messiah , who finally appeared in full in 1773, he wrote dramas, including Hermanns Schlacht (1769). He then turned to Hamburg . In 1776 he moved temporarily to Karlsruhe at the invitation of Margrave Karl Friedrich von Baden . After his death on March 14, 1803 at the age of 78, he was buried on March 22, 1803 with great sympathy among the population next to Meta in the cemetery of the Christian church in Ottensen .

Klopstock was a member of the Hamburg Freemason Lodge to the three roses . Since 1802 he was a foreign member of the Académie des Inscriptions et Belles-Lettres .

In Quedlinburg, the Klopstockhaus provides information about the poet. In 1831 a monument by Schinkel and Tieck was inaugurated in the local park in Brühl .

As a father of the German nation-state idea, Klopstock was a proponent of the French Revolution , which he described in the poem of 1789 Know Yourself as the “noblest deed of the century”; Klopstock also called on the Germans for a revolution. In 1792 the French National Assembly accepted him as an honorary citizen. Later, however, he castigated the excesses of the revolution in the poem The Jacobins of 1793. Here he criticized the Jacobin regime, which had emerged from the French Revolution, as a snake that winds through all of France.

Klopstock's enlightened utopia The German Republic of Scholars (1774) is a concept that puts an educated elite in power for the princely rule, which is regarded as incapable of governing. The republic is to be ruled by " Alder men ", " guilds " and "the people", whereby the former - as the most learned - should have the greatest powers, guilds and people accordingly less. The “rabble”, on the other hand, would only get a “shouter” in the state parliament, because Klopstock did not trust the people to have popular sovereignty . Education is the highest good in this republic and qualifies its bearer for higher offices. Corresponding to the learned approach, things are extremely pacifist in this republic : Klopstock rates sniffing, scornful laughter and frowning as punishments between the scholars. This made special demands on the executors:

“Anyone who wants to become one of them must have two main characteristics, namely a great skill in being very expressive; and then a very special larval face, whereby the size and shape of the nose come into consideration. In addition to this, the scornful man (but he also gets more immortalized maculature as a salary than the others) must have a very strong and at the same time rough voice. It is customary to release Schreyer from being expelled from the country and to raise him to a sneer if his nose has the necessary properties for this task. "

Klopstock's conception of heaven, shaped by the scientific achievements of Copernicus and Kepler , is not that of an ancient sky at rest, whose stars are gods and heroes. Its heavenly sphere is rather a world harmony, a rhythm and symmetry of the spheres. So it says in the first song of the Messiah :

In the middle of this gathering of the suns the sky rises,
round, immeasurable, the archetype of the worlds, the abundance of
all visible beauty, which, like fleeting brooks, poured out
around him, imitating the infinite space.
So, under the Eternal, it revolves around itself.

While he is walking,
the spherical harmonies resound from him, on the wings of the wind, to the shores of the suns
. The songs of the divine harpists
resound with power, as if animating. These agreed tones lead the
immortal listener past many a high praise song.

Goethe will take up this picture again in Faust . The "Prologue in Heaven" begins like this:

The sun resounds in the old way
in brotherly spheres of contest,
And her prescribed journey
completes it with thunder. 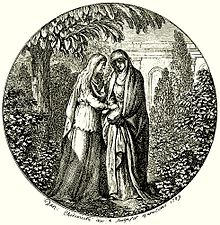 Title vignette by Daniel Nikolaus Chodowiecki for the Hungarian translation of Klopstock's Messiah , 1789

Klopstock's grave under the linden tree in Ottensen, lithograph by the Suhr brothers , around 1840

Klopstock gave the German language new impulses and can be seen as a trailblazer for the generation that followed him. He was the first to use hexameter in German poetry with his Messiah , and his exploration of the "German hexameter", as he called it, led him to his doctrine of the word foot . This paved the way for free rhythms such as those used by Goethe and Holderlin . Klopstock also fought against the strict use of rhyme according to the Opitzsch school. He gave the poet's profession a new dignity by exemplifying the artistic autonomy of the poet, and thus liberated poetry from the didactic didactic poems of the versifiers

Klopstock is considered to be the founder of experiential poetry and German irrationalism . His work extended over large parts of the age of the Enlightenment . Unlike most enlighteners , however, he was not bound to reason, but is attributed to so-called sensitivity . In 1779 he coined the term inwardness , which he described as one of nine elements of poetic representation: “Inwardness, or highlighting the actual innermost quality of the thing.” He is also considered to be an important pioneer for the movement of Sturm und Drang . In Werther is Klopstocks effect points to Goethe:

“We went to the window, it thundered to the side and the wonderful rain purred on the land, and the most refreshing fragrance rose to us in the fullness of warm air. She stood on her elbow and her eyes penetrated the area, she looked up to the sky and at me, I saw her eye full of tears, she put her hand on mine and said - Klopstock! I sank into the stream of sensations which she poured out on me in this loosing. I could not stand, leaned on her hand and kissed it with the most delightful tears. And looked at her eye again - Noble! you would have seen your admiration in this look, and now I would never hear your name, which has so often been desecrated, mentioned again. "

- Goethe : The Sorrows of Young Werther, Version A

Despite all this, the young Lessing registers:

“Who will not praise a Klopstock?
But will everyone read it? - no!
We want to be less exalted
and read more diligently. "

Lessing sums up what happened to Klopstock's work: Although he received great social recognition, the real literary interest in his work lagged behind.

Klopstock also made an impression on composers and musicians such as Georg Philipp Telemann , Christoph Willibald Gluck , Carl Philipp Emanuel Bach , Andreas Romberg and Christian Friedrich Daniel Schubart . Schubart knew large parts of the Messiah by heart and once, as he was sailing on the Rhine - he was reading the Messiah on a board that he had placed over the boat - one passage excited him so much that he started up and put the board and book in it Rhine flew: "I stood there as if thundered and looked pale and rigid-eyed after my dear Messiad, who fluttered like a shot duck on the water and sank."

Even after their immediate impact and up to the present day, Klopstock's works have been set to music by composers. Gustav Mahler set the poem The Resurrection to music with his own additions in the fifth movement of his second symphony (composed 1888–1894, premiered in 1895). Further settings include:

The following important information is missing from this article or section:
for publisher, location, edition and page number, see formatting rules for literature .
Help Wikipedia by researching and pasting it . 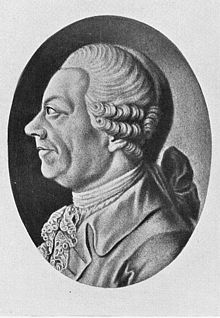 A directory of works, letters, complete editions, secondary literature with complete information on the publisher, place, edition and number of pages is available at s: Friedrich Gottlieb Klopstock . 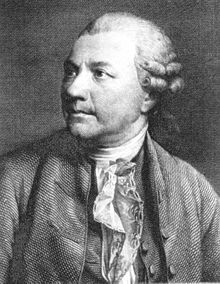 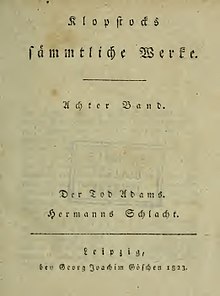 Title page of The Death of Adam. Hermann's battle in the edition of the Complete Works (Leipzig 1823) 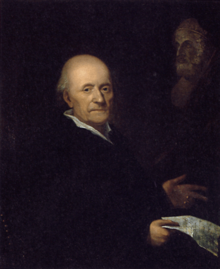 The plant genus Klopstockia H.Karst is also named after Klopstock . from the palm family (Arecaceae).

The state of Saxony-Anhalt has been awarding the Klopstock Prize for new literature since 2015 . Current German-language works (novels, poetry, drama, travelogues, essays) or the complete works of an author as well as up-and-coming authors are honored for outstanding publications. In addition to the main prize endowed with 12,000 euros, a sponsorship prize of 3,000 euros will also be given to young authors.

The Christian poet is commemorated in the Evangelical Name Calendar on March 14th, the day of his death.

In more than 65 cities and towns streets were named after Klopstock, u. a. in Berlin, Dresden and Leipzig.

To person and time

On specific aspects of the work

The State and University Library of the Free and Hanseatic City of Hamburg has set up an office to manage the estate.