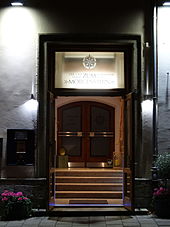 Initiation of a seeker
, end of the  18th century

With Freimaurerloge (from English lodge , hut ',' box '; althochdeutsch  loubjà , arbor') is on the one Bauhütte (or lodges temple hereinafter) in the Masons congregate there, according to their usages to " work ". On the other hand, the associations themselves are called that.

According to its task, the meeting place is a quiet, protected space and is equipped with symbols of brotherhood , light and truth . The place where a lodge is located is also known as the Orient .

The patron saint of the so-called Johannislogen is John the Baptist . These lodges work in the three grades of apprentice , journeyman and master . All Freemasons, regardless of their degree or duties, see themselves as brothers with equal rights and make decisions in their lodge democratically . Especially in continental European lodges the lecture (so-called drawing ) on Masonic or other topics belongs to temple work .

In addition to the three degrees of the St. John's lodges, there are also high-grade systems that “ process ” a different number of other degrees in their own lodges that are independent of the St. These degrees are not intended to supplement the Johannis degrees, but aim to deepen the teachings of the apprentice, journeyman and master degree. Therefore, today they are called stages of knowledge or perfection. A member of a high degree system will always meet other Freemasons at the same level (and vice versa), there is no hierarchy.

The Masonic lodges in Germany are usually organized like civil associations, i. H. they are headed by a chairman ( master of the chair ) and his deputy (first and second overseer). As stipulated by law for registered associations, a treasurer and secretary are also elected. Together these officials form the board of directors of the lodge (council of officials). In addition, other members are entrusted with special tasks: the speaker (a specialty of continental boxes), the conductors (more rarely also conductors in the north German area, responsible for the house and catering), the gift curator, music master, archivist, master of ceremonies, plus committees (e.g. admission committee, court of honor).

During the ritual work, some of the officials have special tasks; so the work is directed by the master from the chair , while the overseers head each part of the brothers (divided into two columns).