A grand lodge or grand orient , with emphasis on the differences in the type of teaching also obedience or obedience, is an umbrella organization in Freemasonry in which individual lodges (associations) are united. 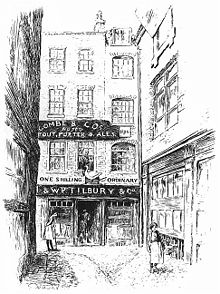 “Goose and Gridiron”,
the place where the  First
Masonic Grand Lodge was founded in  1717

International Freemasonry does not have a central management body, but is divided into individual, independent Masonic lodges , which are organized in a similar way to civil associations and come together in umbrella organizations. In the umbrella organization the members (lodges) elect a chairman, the grand master . For the administration of the Grand Lodge (correspondence, bookkeeping, speeches) and for ceremonial tasks (founding lodges, honors), the Grand Master is supported by the so-called Grand Officials Council. In addition to functionaries such as the grand secretary and grand treasurer, who are also present in other associations, it is in particular the grand overseers and the grand master of ceremonies who are responsible for the ritual tasks.

Based on these umbrella organizations, the organization of today's Freemasonry worldwide is divided into Freemasonry, recognized by the UGLoE as “ regular ”, and the liberal Freemasonry, which originally originated from the GOdF .

The names of the grand lodges and cities are the ones customary around 1930 and can differ from today's form, especially for city names.

In the modern Rosicrucianism of the AMORC one also speaks of lodges and grand lodges. Here, however, the context is defined somewhat differently than in Freemasonry. Each jurisdiction that is divided according to language areas is subordinate to a grand lodge. It is in turn responsible for the administration of the various boxes, chapters, pronai and atriums in the individual jurisdictions. The highest organ is the Supreme Grand Lodge, to which all jurisdictions are subordinate.