The palms or palms (Arecaceae or Palmae) are a family of the order of the palm-like (Arecales) within the monocotyledons (monocotyledons). Related species were widespread around 70 million years ago in the Cretaceous Period . The family contains 183 genera with about 2600 recent species .

The representatives of the palm family are very diverse. They can be small, medium-sized or large (up to 60 m trunk height for the Quindio wax palm ), stand individually or in groups (clusters), are reinforced or unreinforced. They can bloom several times in a lifetime (pleonanth) or only once in a lifetime ( hapaxanth ).

The trunk is "lignified". It is slim to massive, very short to very high, it can be creeping, underground, climbing or upright. Usually the trunk is unbranched in the aboveground area, rarely it is dichotomously branched. The trunk lacks a cambium , so palms have no secondary growth in thickness , which is why they are not counted among the trees . In some palms, however, a diffuse growth in thickness occurs. The internodes are short to long. The leaf scars are conspicuous to inconspicuous. Some palms have stilt roots . 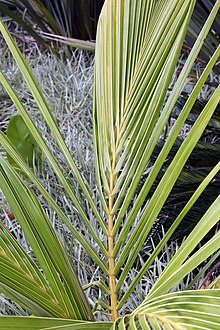 The leaves are alternate and are in a spiral arrangement, rarely two-lined (distich). The leaf blade is initially always formed undivided, often it splits later. The leaves can be armed with spines or bristles, they are bare or variously covered with scales and / or hair. Sometimes they have a ligula- like appendage on both sides or in front of the petiole . The leaf sheaths sometimes form a crown shaft. The petiole is usually clearly developed. It is unreinforced or reinforced in various ways. A hastula can be formed or absent.

The shape of the leaf blade is fanned out (palmat, fan palm ), costapalmat, pinnate (pinnat), double-pinnate (bipinnat), two-part (bifid) or undivided, but then with pinnate-shaped veins. The leaf is folded in the bud. Later the blade tears either along the adaxial fold edges (induplicate) or along the abaxial edges (reduplicate). It seldom tears between the folds or does not tear at all. The resulting segments or leaflets are lanceolate or linear to rhombic or wedge-shaped. In cross-section, the leaflets are V-shaped in the induplicate leaves and A-shaped in the reduplicate leaves. They are single or multiple folded, usually they have a central rib and numerous parallel arteries. The segments seldom tear further between these secondary arteries. The blade can be hairy or scaled differently, spines and bristles are also present. The proximal leaflets can be transformed into thorns in climbing species ( acanthophylls ), the rachis can be transformed distally into a climbing aid ( tendril ) and can then also carry acanthophylls.

The flowers of the Arecaceae family are hermaphroditic or unisexual. The species are polygamous , monoecious, or dioecious .

The inflorescences are usually on the side (or less often on) the tip. If the inflorescence is at the tip of the palm (terminal = terminal), then the plant specimen dies after flowering and seed formation; these species are hapaxanth , i.e. perennial , all others are persistent. The mostly well-branched inflorescences are covered with a spathe as protection when they are in bud . The flowers can be hermaphroditic, but mostly they are unisexual. There are monoecious ( monoecious ) and dioecious ( dioecious ) palm species. The flowers are always threefold and are mostly radial symmetry , rarely the flower structure is screwy. There are usually three sepals and petals; they are free or overgrown. There are usually six, rarely fewer, stamens ; some of them are often reduced to staminodes . The three carpels can be completely free or grown together at their base. Each carpel contains one or two ovules . You can rarely see a stylus and so the three stigmas per flower are usually seated. The pollination is done by insects ( Entomophilie ) or by the wind ( anemophily ).

Palms form closing fruits , mostly hard berries or stone fruits . The pericarp is smooth, hairy, covered with spines or scales. The fruits usually contain one or two to three, only rarely up to ten seeds.

Palm species are distributed worldwide in tropical and subtropical areas. The greatest biodiversity is found in tropical rainforests; But palm trees also grow in some seasonal or semi-arid areas. An example of the latter is the palm-rich Cerrado in central Brazil. 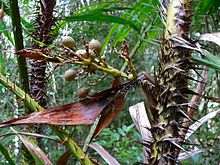 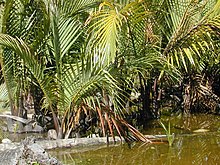 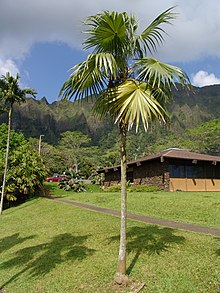 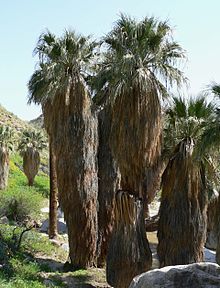 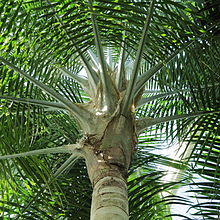 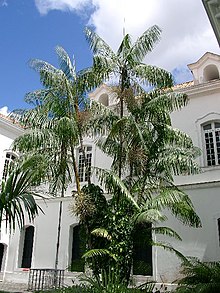 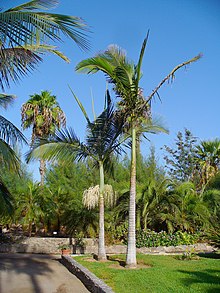 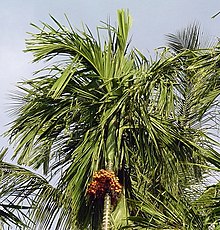 The systematics of the Arecaceae has been greatly changed by molecular genetic studies. In 2005 a classification of the family summarizing the various sub-works was published. This classification was adopted in Genera Palmarum in 2008 with updates.

The relationships between the five subfamilies have now been investigated quite well. They can be represented by the following cladogram :

In 2016, Baker and Dransfield published a further update of the classification based on the following system:

The fruits of around 100 palm species are edible ( date palm , palmyra palm ), while the seeds of others ( coconut , betel nut , palmyra palm) are edible . The edible cone of vegetation is called the palm heart , and sago can be obtained from the pulp of the trunk of some species . In the Indomalayan region the sago palm is of great importance as a starch supplier. The sap of palm trees - especially the sugar palm - is used to make beverages, and sugar can also be extracted from it. By fermentation produced palm wine . Beverages can also be made by fermenting fruit pulp. Few palm blossoms attract bees, so palm honey is actually a palm syrup and is not produced by bees, but is made by boiling the palm sap, comparable to maple syrup . As an economically important oil producer, the oil palm from Africa is now cultivated in the tropics around the world.

In many countries, palm species are the basic material for building houses, the trunks of which are used as wood and the water-repellent leaves are used for roofing ( palapa ). From Rotangpalmen ( Calamus ) are rattan -Furniture made.

Palm species are used both as a style element to convey a southern impression in public green spaces and gardens and as indoor plants .

In areas with little rain they are used to stabilize the soil on embankments and (possibly irrigated) green spaces. They are also much less sensitive to wind breakage than deciduous trees, so they can thrive well in places exposed to wind.