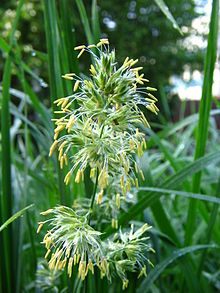 When there is wind flowering, a very high ratio of pollen grains to number of ovules ( P / O value ) is necessary to ensure a sufficient pollination rate. It is around one million in the pine-tree species and around 2.5 million in the common hazel ( Corylus avellana ). The silver birch ( Betula pendula ), however, has a value of 6700, which is in the range of animal-flowering species. The high cost of pollen production is partially offset by the fact that wind-pollinated pollen usually contains significantly less sporopollenin .

The plant families that are wind-flowering include the sweet grasses (Poaceae) and rushes (Juncaceae), each of which has hermaphrodite flowers. The species-rich genus of the sedges ( Carex ) has unisexual flowers. The order of the beech-like (Fagales) with beech family (Fagaceae) and birch family (Betulaceae) is characterized by unisexual, monoeciously distributed flowers, to it belong many native tree and shrub species. Another group with predominantly wind pollination are the elm family (Ulmaceae), hemp family (Cannabaceae) and nettle family (Urticaceae), which were formerly combined as a separate order Urticales , which are monoecious or diocesan .

Ludwig Ganghofer describes the fir blossom in his novel, " Waldrausch ", which has been filmed several times, as rust-colored clouds that fly through the forest in spring.