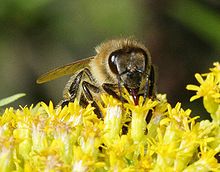 Honey bee sucking nectar on the calyx of the goldenrod

Nectar is an aqueous liquid that is rich in various types of sugar such as sucrose , glucose and fructose and also contains minerals and fragrances . The nectar is excreted by plants as glandular secretions from the nectaries ( nectar glands) in order to attract animals, which are supposed to transport the pollen of these plants to flowers of the same kind for the purpose of reproduction (sexual reproduction). Nectaries can also sit on petioles outside the flowers.

This principle to use animals (mainly insects , subordinated to vertebrates such as hummingbirds and some bats ) to pollen for pollination to transport targeted to other flowers, provides, under certain conditions, a significant improvement in contrast to wind pollination in the evolution represents (see animal pollination ). As a motivation or reward and at the same time a source of energy, e.g. B. for flying, the sugars contained in the nectar are used .

Many animals use nectar as a source of food and, along with honeydew, is the raw material from which bees produce honey . The bees' own enzymes break down the sucrose component further into the basic building blocks glucose and fructose and the water component is reduced. Unpurified honey, as it flows out of the honeycomb, is also known as honeycomb .

In Greek mythology , nectar is a drink of the gods, which, like the food ambrosia , gives them immortality .