The hemp plants (Cannabaceae) are a family of plants in the order of the rose-like (Rosales). The eleven genera with around 170 species are distributed almost worldwide.

The most important useful plants of the hemp family are in the two genera hemp ( cannabis ) and hops ( humulus ). 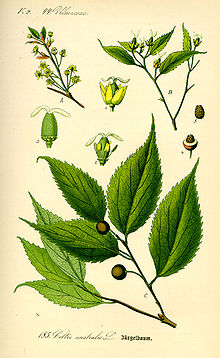 They are perennial herbaceous plants or woody plants: shrubs and trees ; some species are climbing plants . Some species contain resin .

The arrangement of the leaves on the stems or twigs is opposite or alternating and is screwy or two-line. The stalked leaves have a very diverse leaf blade from simple to palmate lobes to divided. They always have a sawn leaf edge. Stipules are always present, they may or may not be fused together.

Ingredients and sets of chromosomes

The ingredients are alkaloids and flavonols . 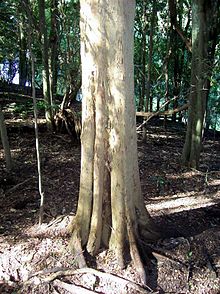 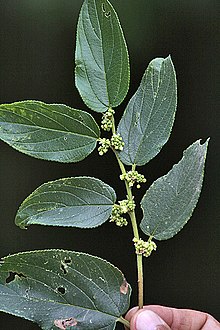 The valid first publication of the family name Cannabaceae took place in 1820 by Ivan Ivanovič Martinov in Tekhno-Botanicheskīĭ Slovar… , p. 99. The publication of Cannabidaceae by Stephan Ladislaus Endlicher did not take place until 1837 in Genera plantarum secundum ordines naturales disposita . The type genus is Cannabis L.

Position in the order of Rosales

For a long time the Cannabaceae family consisted only of the two genera Cannabis and Humulus within one order Urticales. Molecular genetic studies showed that the six or seven families and 2600 species of the earlier order Urticales also belong to the order Rosales . It turned out that the subfamily Celtidoideae with the genera Aphananthe , Celtis , Gironniera , Pteroceltis and Trema are not closely related to the subfamily Ulmoideae. Instead of the Ulmaceae, the genera of the Celtidoideae belong to the Cannabaceae.

Although the Celtidoideae contain more genera and species, the family is not called Celtidaceae, but rather Cannabaceae for priority reasons . The following synonyms for Cannabaceae Martinov result: Cannabidaceae Endl. , Celtidaceae Engl., Lupulaceae Schultz Sch., Nom. illegal.

The hemp family (Cannabaceae) today contains around (nine to) eleven genera with around 170 species: