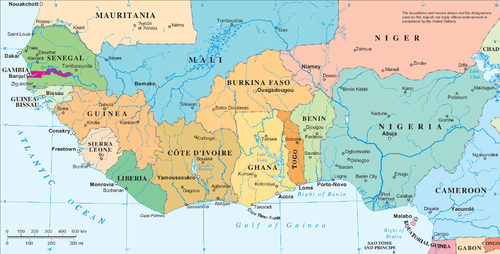 Under West Africa means the western part of the generally African continent, north to about the central Sahara , in the south and west by the Atlantic Ocean limited. From a geographical point of view, the western part of Africa also includes the countries of the Maghreb north of the Sahara (and thus in North Africa ) .

West Africa (with / without Mauritania and St. Helena, Ascension and Tristan da Cunha )

The Greater Region extends over a large part of the African continent, which includes parts of the Sahara in the north and in the south from the coastal regions of the Atlantic to the highlands of Adamaua and the Cameroon Mountain . In general, West Africa encompasses the western part of the greater landscapes of the Sahel and Sudan , as well as the tropical rainforests of the Upper Guinea Sill . The climate of the Greater Region is very different due to its extent, while the north of the region lies all year round in the area of ​​influence of the dry trade winds , also known as Harmattan , the south of the region is influenced by the West African monsoon system and is known as tropical- humid climates, with regionally differently pronounced dry and rainy seasons .

The highest point in West Africa west of Cameroon is the Bintumani in Sierra Leone .

The forms of vegetation are also different. While the vegetation forms of the Sahara predominate in the north, the dry savannas of the South Sahara grass and shrub savannah and the Sahel-acacia savannah extend in the Sahel region . In Sudan , the wet savannahs of the Western Sudan savannah predominate, and there is an extensive rainforest on the windward side of the Upper Guinea threshold .

The northern part of West Africa in the satellite image

In the transition area to the Sahara and in Mauritania , light-skinned Berbers ( Tuareg ) and Arabs live, south of which mainly black African peoples. Many West Africans are followers of indigenous religions; of Islam has in the Middle Ages, gained influence. As a result of European proselytizing , minorities of Christians live mainly on the southern coast. There is a diaspora of Lebanese and Syrians , especially in the big cities. The Fellowship of Christian Councils and Churches in West Africa has existed since 1994.

Before the arrival of the Europeans, there were important empires in West Africa such as Ghana , Mali and Songhai . From the 15th century onwards, the British, Brandenburgers , Danes , French, Dutch, Portuguese and Swedes founded forts and factories along the coast, primarily to be able to operate the lucrative slave trade with North America.

West Africa has long been known as the "white man's tomb". In the 18th century, 25 to 75% of newly arrived Europeans died within the first year of arrival from tropical diseases such as malaria , yellow fever or sleeping sickness . Later it was still an estimated 10%. The spread of these diseases was greatly facilitated by the high prevalence of malaria mosquitoes and tsetse flies . Added to this were the poor hygienic conditions during the rainy season , which could also lead to amoebic dysentery .

In the late 19th and early 20th centuries, the colonial division was cemented. Around 1900, West Africa contained the extensive colonial areas of British , German and French West Africa .

Around 1960 there was a wave of independence in the course of which numerous West African states became sovereign.

West Africa is shaped by the contrasts between the Francophone and Anglophone states , also as a result of different understandings of colonization by the French and the British. The ties of the former colonies to their mother countries are in part closer than to neighboring countries. The West African community of states ECOWAS serves the integration of West Africa and strives for peace in the numerous crisis regions (Sierra Leone, Liberia, Ivory Coast).

The Sahel countries are among the poorest in the world, Nigeria is severely underdeveloped despite its oil wealth. On the coasts there are monocultures of an export-oriented agriculture. A large number of West Africans practice subsistence farming .

The road network is poorly developed, railways only exist as a means of transport for some inland states to the coast as a result of colonial economic policy. Important ports are Dakar , Conakry , Abidjan , Accra , Lomé , Lagos and Freetown .

Over half of the African languages ​​are spoken in West Africa . The Nigerian and Afro-Asian language groups dominate . The oral transmission of knowledge through griots and the use of masks and dances on ceremonial occasions are important for the traditional culture of the savannah and rainforest peoples.