The title of this article is ambiguous. Further meanings are listed under Factories (disambiguation) . 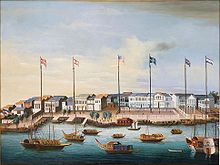 The Thirteen Trading Offices of Canton (painting from 1820) with the flags of Denmark, Spain, USA, Sweden, Great Britain and the Netherlands.

A factory ( French factorerie or factorie , English factory , Spanish factoría , Portuguese feitoria , Italian fattoria , Dutch factorij ) was the trading post of merchants in other European countries or overseas in the colonial era .

Your manager, called factor or factorist , was the on-site representative of his principal (owner) or the respective trading company, the contact person in all matters, passed reports and information on to the head office and was responsible for goods logistics (proper storage and / or further transport). Since information from the parent company did not arrive until days or weeks later, this was an absolute trust in medieval trading houses like those of the Fuggers and Welsers .

Importance of the factories and their distribution

Traders were founded in Asia, Africa and America in particular and ensured the exchange of goods between European trading companies and the local population. For this purpose, they usually had large stores for goods to be imported and exported. The Hanseatic League had similar branches in the East and North Sea countries as early as the 13th and 15th centuries ; the term trading post did not come into use until the 16th century. The Hanseatic League had trading shops in England ( Boston , King's Lynn ), Norway ( Tønsberg ) and Finland ( Åbo ).

In the 19th century, factories came only in Africa, in the southern part of Asia, in the East Indies, in Canton (China, until 1842), in Nagasaki (Japan, from 1609 to 1858 by the Dutch factory) and in North America (for example the factories of Hudsonbaigesellschaft ago with military equipment and forts). Colonies arose several times from such factories, established by powerful trading companies, which gradually expanded over larger areas.

In the area of ​​mining there were also mining factories .