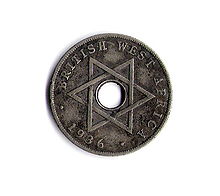 British West Africa comprised the areas of today's states of Sierra Leone, Nigeria , Gambia and Ghana (former name: Gold Coast ). The beginnings of British influence in this part of Africa go back to the 17th century, when the British established fortified trade bases here such as Cape Coast Castle or Fort Metal Cross . In various ways, they colonized the areas around these bases from the late 1780s to the 1960s .

British West Africa was never a single administrative area within the British colonial system, but there was a single currency within these areas from 1907 to 1962 (or until the individual states became independent), the West African pound .

Different forms of exercise of power

Flag of the Governor of British West Africa

The British made a distinction within British West Africa between crown colonies , protectorates and territories . These differentiations were much more than just administrative distinctions. They related to different degrees of autonomy of the territories and to possible civil rights of the residents.

The rest of British West Africa, geographically the absolutely predominant part, consisted of “protectorates” and “territories” in which largely traditional structures - or what the British thought they were - were retained. Here lawyers were forbidden to practice and political associations could only be formed disguised as cultural organizations. The concept of so-called indirect rule was invented for these areas , ie the “indirect rule” of the British, which ran partly through recognized traditional rulers, but often also through “traditional rulers by the grace of Great Britain”, which was not widely accepted within the population.

In the first half of the 20th century, there was a native class, educated to the west, called the "elite" within British West Africa. These - mostly - men usually knew each other, no matter which part of British West Africa they came from. They mostly moved freely between the individual British areas and - in contrast to the educated classes within the French colonies - had more of a West African than a Nigerian or Gambian identity.

The end of British West Africa

The end of British colonial rule in West Africa was accelerated by the Second World War , which brought about a considerable economic upswing and the first beginnings of industrialization in West Africa. In addition, this war was fought with the participation of several thousand West African soldiers in British service on the side of the Allies in the name of freedom and democracy. The pace of decolonization continued to be determined by various forms of civil resistance and open uprisings in the individual colonies, e.g. B. the so-called Accra riots in 1947 in the Gold Coast.