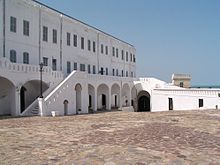 Cape Coast Castle is a historic fort in Cape Coast in Ghana Region Central Region . It is on the UNESCO World Heritage List . 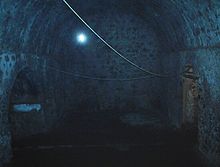 The building was built in 1637 as a Dutch base, but was conquered by Sweden under Henrik Carloff as early as 1652 and named Fort Carolusburg . Carloff operated the fortress with the help of Svenska Söderkompaniet as a trading base.

1660–1663 the local Fetu conquered and occupied the castle. It became Danish in 1659, Swedish in 1663 and British in 1665 (through Robert Holmes ). On March 28, 1722 one of the most sensational piracy trials in the history of the British Admiralty began at Cape Coast Castle . 95 sailors from Bartholomew Roberts' crew were found guilty of piracy and sentenced, 52 of them to death by hanging .

Cape Coast Castle is one of around 35 historic forts on the Ghanaian coast . Like most other forts on the so-called "Gold Coast", Cape Coast Castle served as a prison for locals who had been captured for sale and transport as slaves to the European colonies in North and South America and often in the fort's cellar dungeons Had to wait months for the next slave ship before they were finally brought to the beach through a narrow cellar corridor for loading.

It has been on the UNESCO World Heritage List since 1979. The Ghana Heritage Trust now operates a large museum in the castle on the history of the slave trade on the former Gold Coast.

Fortresses and castles in the Volta, Greater Accra, Central and Western regions