Engraving of the fortress from 1745 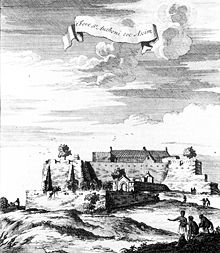 Historical representation of the fortress from 1709

Today's Fort St. Anthony on the coast of Ghana near the city of Axim was built by the Portuguese in 1515 as the fortress of São Antonio .

After the São Jorge da Mina Fort, the São Antonio fortress was the second fortress built by the Portuguese (and a European power in general) on the West African gold coast . In 1503 they had built a small trading post a little east of the later fortress, closer to the mouth of the Ankobra River , which, however, suffered from constant attacks from the inhabitants of a place called "Achombene". The Dutch conquered the fort in 1642 and held it until 1872, when they swapped various forts on the coast of Ghana with the British to simplify administration. In 1642 the Treaty of Axim was signed here. The British conquered the fortress in 1664, but had to return it to the Dutch the following year.

It was only through the fortress that the Portuguese and, after the conquest, the Dutch successfully conducted their gold trade with the surrounding area rich in this precious metal. It is said that for a time more gold was traded through Fort St. Anthony than through all the other fortresses on the Gold Coast combined.

The building was originally roughly triangular, following the shape of the cape on which it was built, and had its strongest defenses on the land side. There a trench three meters deep was dug into the rock. On the sea side it was protected from the approach of enemy ships by some rocky islets and dangerous reefs, as can be seen well in the copper engraving above. However, it was precisely this natural defensive system that became the Portuguese fate in 1642 when the Dutch set up cannons there and shelled the fortress.

Fortresses and castles in the Volta, Greater Accra, Central and Western regions