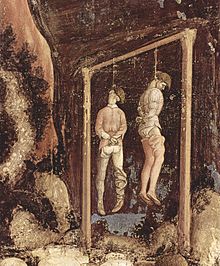 When hanging or hanging (veraltend also: Henken ) the killing by constriction of the neck or breaking the nape in a - - mostly current loop designated under the influence of body weight. Hanging is one of the most common methods of suicide and one of the oldest types of execution . Strangulation is the forensic generic term for hanging, strangulation or strangulation .

A special form that has nothing to do with strangulation was the “ Jewish punishment ”, or hanging on the feet, which was practiced on Jews in the early modern period.

A distinction is made between three variants. They are characterized by the way the rope and the gallows are constructed.

In the short case, the convict is positioned on a car, cart, horse or other object in such a way that this object can be moved away from under him. By compressing the arterial vessels in the neck, i. H. the carotid arteries and the vertebral arteries, an immediate cessation of blood flow to the brain occurs, which leads to unconsciousness within 5 to 10 seconds. Your own body weight is more than sufficient to cause these vessels to close. Congestion only occurs when the compression is not complete, which is usually not the case with free hanging. Death occurs as a result of the lack of oxygen in the brain, which leads to irreversible damage after just 3–5 minutes. Before 1850 this method was mainly used.

This variant appeared in England in the 1860s. The height of fall was between 1.20 and 1.80 meters. Scientific details about this method were published by the Irish doctor Samuel Haughton .

In 1872 a new form of hanging was introduced by William Marwood , which was considered a scientific improvement over the standard case. The length of the rope was determined based on height and weight so that the delinquent 's neck was broken, but beheading avoided.

For a long time it was assumed that hanging or hanging leads to a painless death in a short time. For the method without a broken neck, however, this could be refuted by forensic medicine attempts by Nicolae Minovici at the beginning of the 20th century. Accordingly, the interruption of the blood supply to the brain leads to considerable pain.

In forensic medicine, a distinction is made between typical and atypical hanging. In typical hanging, the body hangs in a free-floating position; the hanging point, which can be detected via the cord groove, is at the back in the middle of the neck. When hanging atypically, for example, the sitting or lying body partially touches the ground, the suspension point is then mostly shifted to the side or at the front of the neck.

In the Middle Ages and early modern times, hanging was similar to slow strangling : the weight of the body pressed the rope onto the Adam's apple , the thrush, and thereby constricted the windpipe .

In Austria-Hungary it was customary to lift the delinquent by an alignment pole, put the noose around his neck and then pull the body down with a jerk. This compressed the carotid arteries and vertebral arteries . Sometimes the base of the tongue pressed against the back of the throat and blocked the airways. The convict quickly lost consciousness and died due to the interruption of the blood flow in the brain (the venous outflow of the blood is also stopped by the external compression).

If the long drop is used on the gallows (as in Great Britain until the death penalty is abolished ; currently still in some US states , Singapore , Malaysia , Kuwait and Iraq ), the convicted person falls through a suddenly opened trap door in the ground after the rope length calculated depending on his weight and build, about 1.5–2.6 meters before the rope suddenly slows down the fall. The intended, but not always occurring, consequence is a fracture of the dens axis ( neck fracture ), whereby the displacement of the fragments of this bone is intended to squeeze the medulla oblongata (elongated marrow) and thus damage the central circulatory and respiratory centers. This type of hanging often leads to post-mortem erections in men . Otherwise, from a neurophysiological perspective, it has the same effect as decapitation . If the rope is too long, the head may tear off (as in the case of Barzan Ibrahim at-Tikriti ); if it is too short, the convict may not pass out immediately.

In the penal system , executions are usually carried out by hanging on a gallows .

In contrast to the honorable beheading , which was mostly reserved for convicts of higher rank, the dishonorable hanging was granted to such lower social rank or bird-free ones , who were then often left to the birds to feed on the gallows. This partly continued into the 20th century. The Nazi judiciary left many resistance fighters against the Hitler dictatorship hanging. The death sentences imposed by the Nuremberg Tribunal were also "death by hanging".

This form of the death penalty in the United States was last carried out on January 25, 1996 on Billy Bailey in Delaware .

A case from Brilon is known from the 17th century , in which a deceased delinquent was hanged.

In early modern times , Jews were supposed to hang upside down on their feet, the so-called Jewish punishment , whereby dogs were often hanged as a tightening, as a woodcut from the Swiss Chronicle by Johann Stumpf published in Augsburg in 1586 shows. This was also done to force the delinquent to convert to Christianity . If he did so, the sentence was changed to beheading and the corpse was buried regularly.

If the corpses remained on the gallows, parts of the corpses were removed, because their “rogue legs” (bones) or “ arm sinners lard ” (fat) were considered medicinal and magical in the Middle Ages. A thief's thumb, for example, was supposed to bring luck in the game, and the gallows rope was used to tame wild horses. Of mandrakes , which were also used for magical practices, it was believed that they would result from dripping urine and semen of hanged. They were therefore also called "hangman".