Vogelfrei is a redirect to this article. Further meanings are listed under Vogelfrei (disambiguation) .

The word outlaw or wolf-free refers to a person on whom the penalty of Eight (condemnation) has been imposed. This negative meaning began in the 16th century . It later became generally accepted through Baroque poetry and the explanation in Jacob Grimm's German Grammar (1819). A well-known "bird-free" was Martin Luther . 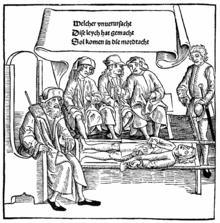 The judge and the lay judges impose the power of murder. Woodcut from the Bamberg neck court order (1507)

Originally the word “outlawless” only meant “free as a bird, unbound”. This is how the word is used in the older sources. Even Luther and Zwingli used the word still in its original meaning.

Much later, it was linked to the ostracism. It resulted from the formulas:

"When you with judgment u. right to the power of murder have been granted, so I'll take your body and well out of the fride and put it into the unfrid and announce the redemption u. without rights and proclaim yourself free to the birds in the air and the animals in the forest and the viches in the water and should not have escorted fride on any street in any mouth that has freed keiser or künig; ... "

"He should be free, like the animals in the forest, the birds and the fish, the fish in the water, so that no one can commit a crime against him for which he can atone"

This ban was also linked to the fact that the sentenced person was not given housing. After death, the corpse was not buried but left to the birds and wolves to eat.

According to today's view, the cause for the spread of the pejorative meaning is not to be sought there, but in the language of the mercenaries and soldiers of that time. This is also supported by the loan word “price” ( Italian presa , French prize ), here synonymous with the word “booty”. People who are harmful to the land are "given up and declared free as a bird".