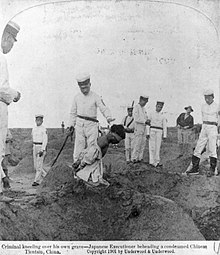 Japanese soldiers at the execution of a Chinese man in Tientsin, China, 1901.

The decapitation , the heads or decapitation (via French décapiter "decapitate" from the Latin caput "head") or Decollation is the violent separation of the head from the body , either as active action for the purpose of execution or accidental injury.

Head hunts were already practiced as a mythical ritual in the Iron Age (see also Celtic head cult ). There are frescoes depicting the Egyptian King Ramses II around 1200 BC. At a beheading, holding the prisoner's hair in one hand and the ax in the other.

Beheading of Louis XVI. , Engraving from the year 1793

Among the Celts , beheadings were common, whereas the Romans only saw this as appropriate for venerable people and forbade the Celts to do so. In the Middle Ages and early modern times, beheading was usually carried out with a sword or a special ax ( ax ). In contrast to hanging on the gallows, it was not considered defamatory and was reserved for the nobility . It was also called "judging with a bloody hand", in contrast to hanging, the "judging with a dry hand".

At times, in England, beheading was reserved for the high aristocracy in an upright kneeling position with the sword , while lower ranks were beheaded with an ax lying on a wooden execution block . The beheading of the kneeling death row inmate with the sword is a much more difficult method that only a few executioners have mastered. When Margaret Pole, 8th Countess of Salisbury was executed in 1541, it took more than ten blows to sever her head from her torso. The inexperienced executioner also needed three blows to behead Maria Stuart . Many convicts gave the executioner significant sums of money in order to obtain an execution in one go.

Since the French Revolution , a guillotine , the so-called guillotine , has mostly been used . It was considered more reliable in relation to being beheaded by an executioner and was intended to ensure that death occurred quickly and safely to prevent unnecessary agony in the victim. Both types were also performed publicly on the scaffold . Since the abolition of the nobility in August 1789, this type of execution has been expanded to include all convicts in France.

Hand beheading was an official form of execution in Britain until 1747, in Finland until 1825, in Denmark until 1892 and in Norway until 1905. Guillotine execution was used in Algeria, Belgium, Greece, Italy until 1875, in Luxembourg, Monaco, and Switzerland until 1940, in Sweden, Tunisia and Vietnam until 1960.

In Sweden 644 people were beheaded between 1800 and 1866 (at least 444 men, less than 200 women). After that, up to the introduction of the guillotine in 1903, 14 people suffered the fate of beheading. The last public execution in Sweden dated May 17, 1876. The two delinquents Gustav Erikson Hjert and Konrad Lundqvist Petterson Tector were executed for two murders in the course of robbery on a stagecoach (driver and passenger). Hjert was executed in Lida Malm by Johan Fredrik Hjort, the Stockholm executioner from 1862 to 1882. Tector was executed at the same time in Gotland by Peter Steineck. The Upsalaer physiologist Frithiof Holmgren (1831-1897) published his observations as an eyewitness to Hjert's execution.

In the German Reich , since 1871, beheading was the legally prescribed method of execution in civil justice proceedings. During the Nazi era , around 10,000 people died from the guillotine. In the GDR , the guillotine known as the "drop sword machine" was used until 1968, before the switch to death by shooting there at the end of the 1960s . In West Berlin , the last decapitation was carried out on May 11, 1949 with the execution of the 24-year-old robbery murderer Berthold Wehmeyer ; Richard Schuh was the last person to be sentenced to death in West Germany - also for robbery - about three months earlier on February 18, 1949 Tübingen beheaded. With the establishment of the Federal Republic of Germany , the death penalty was abolished and all death sentences were converted into prison sentences.

In the traditional ritual suicide ( seppuku ) of the Japanese samurai warrior caste, the head was separated from the body by the kaishakunin with a katana or wakizashi . Here the blow had to be executed so perfectly that the head was only finally severed when the torso fell to the ground.

Situation in the Islamic culture

In Iraq , beheading was a form of execution until 2000. In Qatar , Yemen and Iran , beheading is still part of the constitution as a punishment but is no longer used in practice.

The only state in the world that still carries out beheadings by the sword is Saudi Arabia . You can for rape , adultery , murder , apostasy , witchcraft , armed robbery or trade with narcotics be used as punishment. In public execution places, the beheading is often carried out after Friday prayers . The convicts are dressed in a white robe, their eyes are blindfolded with black tape, their hands are cuffed behind their backs and their heads are pointed towards Mecca .

The terrorist organization Islamic State (IS) also carries out or staged beheadings in a media-effective manner, as with two American journalists ( James Foley and Steven Sotloff ) and two British ( Alan Henning and David Cawthorne Haines ), a refugee and a development worker in the summer and Fall 2014.

Beheadings in the Bible and in the Apocrypha

Occurrence of death after severing the head

Numerous stories are known about beheaded people who are said to have lived on for a while after their execution. After his execution , the pirate Klaus Störtebeker is said to have walked past eleven sailors of his assembled crew without a head in order to (according to legend) save them from the execution.

Statements have also come down to us from the time of the French Revolution , e.g. B. on alleged attempts to speak by severed heads. The German doctor Johannes Wendt and the French Séguret made experiments to research the reactions of the heads. Then you should reflexively close your eyes, for example, if a hand is moved quickly towards the face or the head is exposed to bright light. According to a report by the French doctor Gabriel Beaurieux from 1905, the head of a guillotined criminal had responded to calls for about 30 seconds. Something similar is reported about Hamida Djandoubi , the last person to be beheaded in France (1977).

Forensic pathologist Ron Wright assumed that after the head was detached, the brain could continue to live for about 13 seconds, at least eye movements, etc., would be possible within this period. The exact length of time that the unserved brain can survive depends on chemical factors such as: B. on the amount of oxygen available at the time of decapitation.