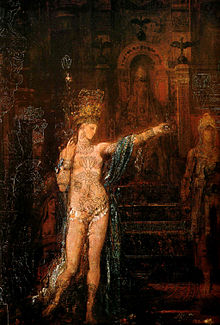 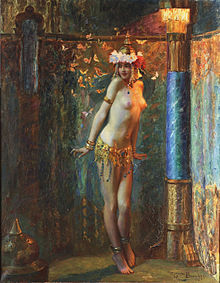 Dance of Salome or The Golden Butterflies ( Gaston Bussière )

Salome brings the head of Johannes to Herodias, fresco by Johann Georg Lederer in the parish church of Johannes the Baptist in Igling.

She is not related to the disciple Salome mentioned in the Gospel of Mark .

Salome was on her father's side a granddaughter of Herod the Great : Her father Herodes Boethos (Herod without land) was the son of the king of his seventh wife, the (second) Mariamne , who, according to the historian Flavius ​​Josephus, was “the most beautiful woman of the time “Was true.

Salome's first marriage was to her uncle Philippus , Tetrarch of Iturea , Golan and Trachonitis . After his death in 34 AD, she married Aristobulus , who was related to her , the son of King Herod of Chalkis . However, his hopes of being able to succeed his father were dashed when the Roman emperor Claudius transferred this kingdom to Agrippa II, the cousin of Aristobulus, in 49. This was certainly a disappointment for Salome too. However, a few years later (54 AD), Aristobulus was appointed King of Lesser Armenia by the Roman Emperor Nero immediately after he took office . Salome thereby became the queen of this empire, which lay with the capital Nikopolis west of Greater Armenia in northern Anatolia .

Several coins with images and inscriptions of Aristobulus and Salome as the royal couple of Lesser Armenia have survived.

A possible source for the biblical story is an atrocity communicated by Titus Livius of the Roman consul Lucius Quinctius Flamininus , who in 192 BC slew a prisoner or had a prisoner slain at meal in order to offer his Punic lust boy the spectacle of an execution. In the story of the Flamininus motif by the Roman historian Valerius Antias , the boy becomes a woman with a dubious reputation. Similar versions of the story can be found in Cicero and Seneca the Elder .

Herod Antipas married his sister-in-law Herodias for the second time . John the Baptist criticized this fact , which, according to the biblical narrative in the New Testament ( Mt 14,1–12  EU and Mk 6,14–29  EU ), led to his murder. Here are reports of events in which the name Salome does not appear, but which form the basis of the later legend of Salome. Flavius ​​Josephus, on the other hand, gives political reasons for the murder, which he says was committed in Machaerus .

The legend itself appears in the New Testament as follows: Herodias desired the death of John, but Herod refused to have him killed. On the occasion of Herod's birthday party, which was attended by many dignitaries, the daughter of Herodias performed a dance with which she so enraptured those present that Herod swore to her: “Whatever you ask me for, I will give it to you until half of my kingdom ”( Mk 6.23  EU ). The girl asked her mother what she should want, and she whispered her own desire. She should ask for John's head. Herod Antipas could not refuse this wish “for the oaths and for the sake of those who were at the table”. He had Johannes beheaded and put the dancer's head on a bowl.

The monk and presbyter Isidore of Pelusium named the daughter of Herodias for the first time in a letter with the name Salome for the first time . As a figure in the story of John's passion, she later appears, for example, in the Old Saxon epic Heliand around 830 and in the medieval plays of the mysteries , passion and prophets as the culprit in John's death.

In the second half of the 19th century there was no Christian-mythological female figure who fascinated contemporaries in art, literature and music as much as the figure of Salome. In the literature of French decadence in particular, she was regarded either as an incarnation of female cruelty, but also as a model of the child woman and the embodiment of ideal beauty and pure eroticism. The asteroid (562) Salome is named after her.