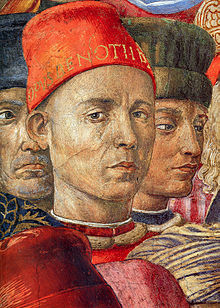 Self-portrait, detail from the fresco Train of the Magi in the Cappella dei Magi in the Palazzo Medici Riccardi in Florence.

Train of the Magi 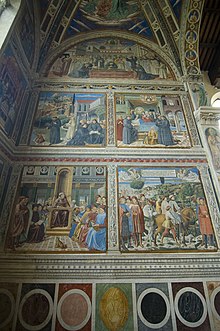 Frescoes in the Chiesa di Sant'Agostino in San Gimignano

Gozzoli, son of the tailor Reading di Sandro, learned from Fra Angelico and accompanied him to Rome in 1446 and to Orvieto in 1447 , where he worked until 1449. After that, the Assumption of Mary emerged in Montefalco , who presented her belt to St. Thomas. The painting is in the Pinacoteca in the Vatican .

He also painted the cycle of frescoes with the legend of St. Francis in the church of San Francesco in Montefalco in 1452 . Around 1456 he went to Florence, where he frescoed the chapel of the Palazzo Medici Riccardi from 1459–1461 . 1463–1464 he stayed in San Gimignano , where he painted, among other things, the large fresco cycle consisting of 17 scenes from the life of St. Augustine for the church of Sant 'Agostino . From around 1468 Gozzoli lived in Pisa , where his main work was created in Campo Santo , a series of 25 frescoes entitled Scenes from the Old Testament . He worked on this for 16 years, until 1485. Much of this work was destroyed in 1944.

From these images that of Noah's drunkenness has become proverbial. After the daughter, who looks at the bared Noah with held fingers, one literally refers to a person who feigns modesty with the name Vergognosa di Pisa .

Of Gozzoli's rare panel paintings , the following should be emphasized:

Benozzo Gozzoli died in Pistoia near Florence in 1497 and was buried in the Dominican monastery.