Round dance of angels and blessed ones from the Last Judgment, Gemäldegalerie, Berlin

Pope John Paul II beatified Fra Angelico in 1982 . He is the patron saint of Christian artists.

Saint Dominic, detail from the fresco Mocking Christ in a Cell in the Convent of San Marco, Florence

His real name was Guido di Pietro, his religious name was Fra Giovanni. His contemporaries knew him as Fra Giovanni da Fiesole (brother Johannes from Fiesole). Fiesole is sometimes misinterpreted as part of its name. It is actually the name of the city where he made his profession . This addition was used to distinguish him from other friars who were called Giovanni.

He is also known as Beato Angelico (roughly: "the angelic blessed"), because during his lifetime or shortly after he was called Il Beato ("the blessed"), which refers to his way of depicting Christian iconography.

In the Martyrologium Romanum he is referred to as Beatus Ioannes Faesulanus, cognomento Angelicus ("Blessed Giovanni von Fiesole, called Angelico").

Fra Angelico was born as Guido or Guidolino di Pietro in Vicchio im Mugello , in Tuscany near Fiesole . His parental ancestry is not known. Vasari gave 1387 as the year of birth, but it has been known since 1955 that this information is incorrect. It is now believed that he was born around the mid to late 1390s. 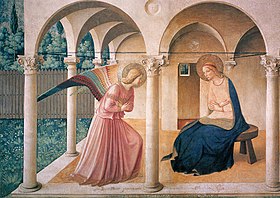 The earliest surviving document that mentions him is dated October 17, 1417, when he joined a religious brotherhood , still under the name Guido di Pietro . This document also shows that he was a painter even then. A fact that is also attested by two payment slips from January and February 1418, issued for work performed in the Church of Santo Stefano del Ponte. The first testimony of him as a friar of the Dominican Order comes from 1423, after he entered the convent of San Domenico in Fiesole and took the name Fra Giovanni .

He was originally trained as an illuminator (book illuminator) and probably worked with his brother Benedetto, who was also a Dominican . His teacher is unknown. In some cases, training with Starnina and the influence of the work of Masolino and Masaccio is accepted. Lorenzo Monaco may also have contributed to his education, the Gothic Sienese school shaped his formal language. He had several important tasks in the convents in which he lived, but this did not limit his artistic output.

According to Vasari , the artist's first works were an altarpiece and a painted rood screen for the church of the Charterhouse of San Lorenzo di Galluzzo in Florence; The remains of a triptych with an enthroned Madonna and Child are preserved.

Detail from the Descent from the Cross, Museo di San Marco, Florence

For his convent of San Domenico in Fiesole he painted various frescoes, as well as the famous Coronation of Mary in the Louvre (Paris) and the Annunciation of the Prado (Madrid). He decorated the high altar of the monastery church with a triptych that was redesigned a few decades later by Lorenzo di Credi .

Soon Fra Angelico received important commissions from Florence and other parts of Italy. His Annalena altar with the enthroned Mother of God and six saints, probably built shortly after 1434 for the former monastery of San Vincenzo d'Annalena, is considered the first known rectangular altar panel of the Renaissance in the sense of a sacra conversazione . This altar also had a great influence on his important Pala of San Marco (1439–1442), which unfortunately was damaged by an unskillful restoration.

He also created several works for the Dominican convent in Cortona , where he can be shown to have stayed in 1438, including a triptych of a Madonna with saints and an Annunciation (both in the Museo Diocesano, Cortona), as well as frescoes in the monastery church, of which only one more thing is preserved.

The Convent of San Marco in Florence , where Fra Angelico lived for a long time after 1436, has several manuscripts that are believed to have been hand- illuminated in whole or in part by him . On behalf of Cosimo de 'Medici, from 1439 he painted the monastery cells and cloisters of San Marco with pictures that were intended to serve the devotion and inner contemplation of the monks . Various employees and students helped him, the most important of which is Benozzo Gozzoli . The convent is now largely a museum, which also houses many other works by Fra Angelico.

In 1445 he worked in Rome for Pope Eugene IV in the chapel of Santissimo Sacramento, and began in 1447 with frescoes in the cathedral of Orvieto , which he left unfinished, in order to create the frescoes in the cappella for the new Pope Nicholas V in Rome until 1449 To paint Niccolina , with the help of Benozzo Gozzoli.

Fra Angelico was one of the most important painters of the early Renaissance. His work already impressed contemporaries with its deeply experienced, deep piety and was early on as "directly mystically inspired". In addition, for a long time the artistic and historical significance of his painting faded into the background and was completely wrongly underestimated. He combined mystical-Gothic features and elegance with the new developments of the Renaissance, which he took up especially from artists such as Masaccio and Masolino. Typical of Fra Angelico is a certain classic simplicity of the picture structure and, especially in the mature works, a soft but luminous color scheme.

He himself was an innovator with the introduction of rectangular altar panels (instead of polyptychs ), as u. a. the proclamation for San Domenico in Fiesole (Prado, Madrid), repeated by himself in several variations , and the Annalena altar with its Sacra Conversazione .

Fra Angelico was also one of the first to depict figures from behind, as u. a. in the Coronation of Mary in the Louvre. His design of the unfortunately not well-preserved Pala of San Marco with a view of a tree-lined garden in the background was exemplary for the art of the Renaissance. In addition to the works mentioned and the Last Judgment for Santa Maria degli Angeli (today in San Marco), Fra Angelico's frescoes of the monastery of San Marco in their extreme simplicity and mystical intimacy are the highlight of his work .

Fra Angelico's influence even extended beyond the borders of Italy: The pictorial invention of the central Predellenbildes Lamentation of Christ from the grave of his Pala of San Marco (1439-42) impressed Rogier van der Weyden during his stay in Italy (1450) so much so that it has a similar composition , but in the Dutch style and in oil , created (now in the Uffizi, Florence). Van der Weyden's so-called Madonna de 'Medici (approx. 1450–55) also owes its composition in the style of a Sacra Conversazione, which is completely unusual for Dutch painting, to the model of Beato Angelico.

Life of St. Nicholas (detail), 1447–48, image of a predelle from the polyptych in Perugia