The title of this article is ambiguous. Further meanings are listed under fresco (disambiguation) .

Dome fresco of the Wieskirche by Johann Baptist Zimmermann (1745–1754)

The fresco or fresh painting ( Italian a fresco , affresco , al fresco ; German  “ins freshness” ) is a wall painting technique in which the pigments previously soaked in water are applied to the fresh lime plaster . When the lime is carbonated , the pigments are firmly integrated into the plaster. Experts also call this process sintering. The finished wall or ceiling picture is called the fresco or, more rarely, the fresco . The performing artist is referred to as a fresco painter or fresco artist .

The term fresco has become colloquial for wall paintings of all kinds. It is therefore not only used for wet execution ( fresco ), but also for paintings that are dry ( secco ) (with tempera, casein or acrylate paints). Even canvas paintings applied to wall surfaces are erroneously referred to as frescoes, sometimes even in specialist literature.

Ceiling fresco by Johann Anwander in Schwennenbach , loss of the coarse and fine plaster layer: battens of the substructure now visible

Since a fresco is painted on the already dimensionally stable, but not yet bound plaster, the wall plaster needs to be built up in layers. First, a first coat of coarse lime plaster is applied to the wall or ceiling supporting the fresco . This is followed by further, thinning layers of finer plaster with an increasingly higher proportion of lime and fine sand or stone flour. The number of layers of plaster required is given differently in sources and usually varies between three and seven. The final and visible image is applied to the top layer of the smoothed fine plaster in a so-called day work (it .: giornata ).

Parts of the picture, corrections or overpainting not completed on the same day of the plaster application are only possible after the lime plaster has tied through by removing the plaster and completely rebuilding the last plaster layer or they must be carried out using a Secco technique. Historically, forms of different painting techniques can therefore often be found in a mural. The combination of fresco and secco techniques in one painting is also known as fresco secco painting . Since the real fresco is much more permanent, the parts of the picture made in secco techniques are often in poorer condition with increasing age than those made in al-fresco technique.

Because of the technically and technically demanding picture structure, the fresco makes high technical and artistic demands on the person performing it. The time-consuming wall and picture construction requires careful planning, preparation and implementation. In addition to the limited range (only lime-fast , alkali-stable pigments can be used, some of them are currently prohibited by construction, e.g. cadmium-containing pigments), this is one of the most important reasons why this painting technique is rarely used at the time.

In the case of al-fresco painting, lime-fast color pigments soaked in overnight are mixed in sintered lime water and applied to the still fresh, moist lime plaster ( it.intonaco ). When setting (drying, setting), a homogeneous layer of lime plaster is created with the associated color pigments. This reaction is called carbonation . The resulting protective layer around the individual color pigments is very stable with the underlayer and maintains the color intensity of the pigments for thousands of years. For the important works of art history, the sump or pit lime was stored in earth pits for years so that the hydration process of the unslaked lime (also known as burnt lime ; chemical: calcium oxide) could progress as far as possible.

Pit limes produced nowadays are soaked in for three to seven years. Historical sources contain references to periods of up to 30 years. At the same time, a thin protective layer or sintered skin forms, which "seals" the fresco and gives it a silky sheen, its decisive distinguishing feature. 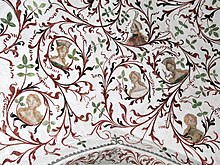 Gothic Kalksecco painting around 1400 in the St. Agatha Church in Leveste in the Hanover region

Individual motifs of the overall fresco are processed on one day in one operation, the so-called daily work . Their outlines are drawn in original size on a cardboard and transferred to the still damp wall. This can be done by rubbing through the contour with a pointed stylus, by means of a grid transfer or classically by perforating the contour drawing with a needle or a needle wheel and then tracing it with a dust bag.

In the classic technique, the cardboard is completely transferred to the penultimate layer of plaster and the traced, dotted contour is traced with a monochrome sketch. This first painting is also known as Sinopia . The term denotes both the color (historically a mixture of red ocher and black or ocher , vermilion and black; the name originally refers to a town with this name in the Middle East, where red ocher was traded in ancient times) and the design painting as such. It is necessary in order to keep the orientation on the overall picture in the execution of individual daily work. The plaster (intonaco) supporting the individual day work is then applied thinly (about 3 mm thick) to the plaster supporting the Sinopia and the painting, which is finally visible, is carried out.

A variant of the background is the "Verdaccio". It is a monochrome, originally in Green earth or a green earth executed blend painting, which not only traces the contour, but respects the fundamental character of the picture on shades and surface painting. The term was later carried over to all forms of shaded underpainting, regardless of the color. The Verdaccio can be implemented as a separate plaster intermediate layer between Sinopia and Intonaco or it can already be worked in the Intonaco, whereby the painting is later only covered with a translucent, thin layer of pit lime. Historically, the Verdaccio was mainly used as an underpainting in the representation of people and for the fining of skin tones. The plaster of the next day must then be very carefully brought up to the already colored plaster of the previous day in order not to destroy the existing work. The resulting jolts between the individual dayworks can be clearly seen in grazing light . 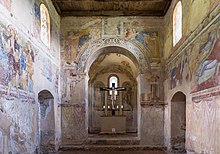 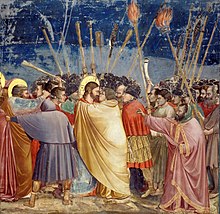 Probably the oldest Christian frescoes in the German-speaking area can be found in the St. Prokulus Church in Naturno in South Tyrol (7th century). One of the best preserved frescoes of its time is the interior painting of the Pürgger Johanneskapelle in Styria (12th century). Since Giotto (1266–1337), a mixed technique of fresco and secco has been used. Well-preserved examples can be found in the Cappella degli Scrovegni in Padua and in the Basilica of San Francesco in Assisi .

In the Renaissance and Baroque periods , almost all work is done al fresco again. Famous examples of this are the Sistine Chapel with the most important fresco cycle of the Occident by Michelangelo , those by Raphael in the Vatican and Domenico Ghirlandaio's fresco The Nativity in the Church of Santa Maria Novella in Florence.

In the 19th century, the Nazarenes in particular tried to revive religious fresco painting after it had been largely forgotten in Classicism at the end of the 18th century .

In monument preservation and restoration measures, frescos are often detached from the wall and attached to a new picture carrier , for example in the Speyer Cathedral , where at the end of the 1950s the painting by the Munich painter Johann von Schraudolph , which was then regarded as kitsch, was replaced, and so on saved the main pictures in this way.

The largest fresco in the world is in the church of the Benedictine Abbey of Neresheim in Baden-Württemberg. The Tyrolean painter Martin Knoller created seven dome frescoes there. The main fresco has an area of ​​714 m² and represents the "Triumphant Church in Adoration of the Most Holy Trinity". The second largest fresco in the world (677 m²) is located in the stairwell of the Würzburg Residence and was designed by Giovanni Battista Tiepolo between 1752 and 1753 painted. The largest secular fresco collection from the Middle Ages is the painting of Runkelstein Castle near Bozen , which was made between 1390 and 1410 and includes courtly scenes and literary material.