The title of this article is ambiguous. Further meanings are listed under ocher (disambiguation) .

As a pigment , it is considered yellow ocher ( bright yellow ) in different varieties and shades in the painting used, corresponding numbers are red ocher , red ocher or brown ocher , brown ocher . The yellow varieties are based on the hue in light ocher , yellow ocher , gold ocher , meat ocher , satin ocher ( Orange ocher , satin upper divided). When heated, yellow pigments are converted into red and then referred to as burnt ocher . This process corresponds to dehydration of the coloring iron compounds .

“Ocher” is only used as a color name for less saturated yellow tones , especially in contrast to the more reddish siena and the greener umber . Other color names for this shade are natural sienna or Schönbrunn yellow, if used .

As a weave color , the color ocher corresponds to the group called goldenrod ( English " goldenrod "). 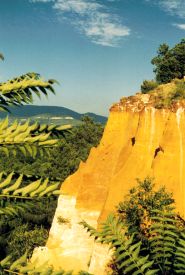 The coloring component in red ocher (related to " red chalk ") is iron (III) oxide hematite ( Fe 2 O 3 ). Typical varieties are French ocher RL, Burgundy ocher , English pit ocher . As with all natural earth pigments, there are also proportions of clays and quartz . The red ocher is also obtained by burning the yellow ocher, as burnt ocher or burnt sienna . The firing process is described under Limonite .

As brown ocher , less colorful (unsaturated) varieties are called, which therefore appear more brown than with a yellow or red hue. It is a natural occurrence with admixtures mostly of manganese oxides and hydrates , which are close to umber . With goethite or with burnt colorants, these look similar to burnt umber or other slightly colored burnt iron oxide pigments.

A letter code has established itself for French ocher , which describes its quality:

All ocher can be used in any binding agent after appropriate trituration . As iron oxide pigments, they are absolutely lightfast , weather-resistant and compatible with all other pigments (assuming the necessary purity). 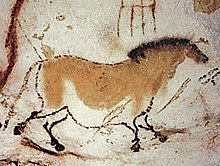 Ocher already appeared in the Middle Stone Age of South Africa as a dye to decorate ornamental snails or as body jewelry, also as a complete painting z. B. the North American Beothuk Indians. In the cave paintings of the European Upper Paleolithic ocher was also used. The scattering of red ocher has been a typical feature of tombs from the Gravettian to the Magdalenian .

In ancient times and in the Middle Ages , ocher was part of the basic warm palette of all colored media in the arts.

The best known mining site in Europe are the ocher quarries in the French town of Roussillon in the Vaucluse department . The gold ocher with its exquisite color, the typical baroque yellow, was famous for its particularly good quality . An impressive, also abandoned mining area is located about 20 km east of Roussillon in Colorado near Bouvène, south of Rustrel. These deposits were already used in Roman times , later forgotten and only rediscovered in 1780.

The mining and sale of French ocher is managed by the Société des Ocres de France (SOF). In Germany, ocher was primarily extracted from sedimentation basins ("ocher swamps") in Goslar on the northern edge of the Harz, which clarified the pit water from the Rammelsberg mining industry. In the Upper Palatinate, too, ocher was extracted in underground mining near Neukirchen near Sulzbach-Rosenberg until around 1920 . Then it was usually processed into paint in a paint mill there.

A well-known Australian mining area is Wilgie Mia near Perth.

Ocher is still at low levels of earth through lengthy Ausschlämmverfahren won. For this purpose, the pigment is washed out in a series of clarifiers and cleaned of fiber in windmills . This raw material is dried and delivered. If necessary, it is brought to the desired color using a firing process. In addition, particularly beautifully colored “nests” (small, concentrated collections) are used especially for artist and restoration needs.

The vast majority of ocher is artificially made from iron oxide paints and grown on a suitable substrate.