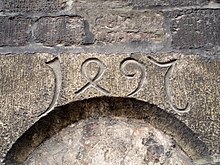 The year 1497 at the Johanniskirche in Wernigerode 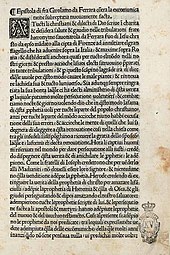 The sea route to India 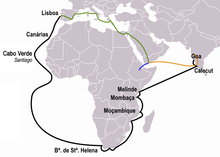 On behalf of the Portuguese ruler Manuel I of sailors leaving Vasco da Gama on 8 July the port of Lisbon in search of the sea route to India . His fleet consists of the flagship, the Nau São Gabriel , the Nau São Rafael under the command of his brother Paulo da Gama , another Nau under Nicolao Coelho as captain and a transport ship under the command of Gonçalo Nunes. A total of 150 to 170 men take part in the trip. The fleet includes the best pilots in Portugal, who are largely familiar with the current and wind conditions, especially in the South Atlantic. Bartolomeu Diaz , who sailed around the Cape of Good Hope for the first time in 1488, also accompanies the small fleet as an advisor to the Cape Verde Islands .

From here, Da Gama sails through the Atlantic Ocean on a long course to the west and clearly separates itself from the coast in order to avoid the well-known lulls in the Gulf of Guinea and to take advantage of better wind conditions. On November 4th, he reached Saint Helena Bay on the west coast of South Africa. Here contact is made with the locals and the ships are overhauled. The bypassing of the Cape of Good Hope succeeds only after several attempts on November 22nd and the fleet lands on November 25th at Aguada de São Braz , where a padrão is set up. At Christmas, the fleet reaches a stretch of land that da Gama calls Natal on this occasion , while the rest of the year the Portuguese follow the East African coast north.

A chess problem with Lucena 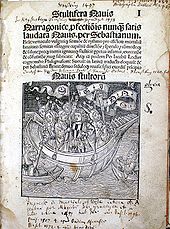 Sebastian Brant's satire Ship of Fools , written in 1494 , appears in the Latin translation Stultifera Navis by his pupil Jakob Locher on June 1st in Strasbourg, printed by Johannes Grüninger . This edition quickly spread across national borders and made Brant's work an international success. Locher's translation is not a literal, but rather a Latin adaptation that takes into account the expectations of the audience who knows Latin and their traditional educational background. A Middle Low German edition is printed by Hans van Ghetelen in Lübeck under the title Dat narren schyp .

Jakob Locher receives the poet's crown from Maximilian I as poeta laureatus . 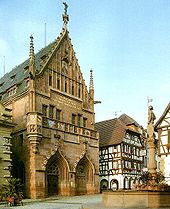 Market square in Bretten with Melanchthon House , which was built as a memorial on the site of Philipp Melanchthon's birthplace