The Pazzi Conspiracy in Florence 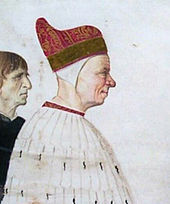 In the same year Grand Duke Ivan III used. uncrowned the title of Tsar for the first time .

View of the Holsten Gate from the west

The Holsten Gate in Lübeck is completed.

A city fire destroys the city of Jüterbog . It is then expanded by the Archbishop of Magdeburg, Ernst , and rebuilt at great expense.

1478 - Year on the St. Laurenz Basilica in Enns, Upper Austria