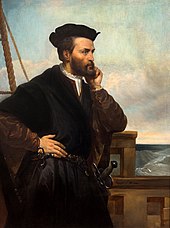 The Anabaptist Empire of Munster 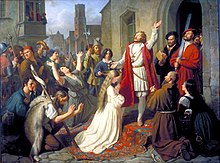 Jan van Leiden at the baptism of a girl. (Historicizing picture, Franz Bähr , 1840)

In January, Jan Matthys sends Jan van Leiden to Münster as Apostle of the Anabaptists . This begins there immediately with the adult baptisms . In the regular election on February 23, the Anabaptists win, whereupon Matthys and van Leiden together with the newly elected mayor Bernd Knipperdolling , the city councilors Bernd and Heinrich Krechting and the preacher Bernd Rothmann found the Anabaptist Empire of Münster . Anyone who is of the Catholic or non-Anabaptist Protestant faith and has not left the city beforehand will be forced to be baptized or expelled from the city. Since the baptism of adults violates the imperial law, Prince-Bishop Franz von Waldeck, with the support of imperial troops , begins the siege of the city on February 28 .

In the following weeks the structures in the city are radically rebuilt. In an iconoclasm in the churches, the Anabaptists destroy everything that reminds of the saints and the clergy and in the process destroy numerous art treasures. They confiscate property in the city, introduce, among other things, a community of property based on the community of property of the Jerusalem primitive community and burn the city archives and archives of the heirs .

When the appearance of Christ, announced by Jan Matthys for Easter, does not materialize, Matthys moves with some faithful to the city and is killed by the besiegers on Easter day, April 5th . From this point on, Jan van Leiden is the de facto head of the Münster Anabaptists. In the course of the year he named himself King of the " New Jerusalem " and Heinrich Krechting his Chancellor. Due to the large surplus of women, he also introduced polygyny in Münster . Opposition within the city is massively suppressed.

Although the siege caused a shortage within the city walls during the year, Franz von Waldeck did not succeed in taking the city in 1534. But the Anabaptists also fail to get outside support for their cause. In September “missionaries” are sent to neighboring cities. However, these are either intercepted by episcopal troops or picked up in their target cities. Those who can preach have little success. Only in Warendorf do the Anabaptists take control of the city for a week, but are quickly beaten by the episcopal soldiers. In October a request for help to the Dutch Anabaptist movement, which is also under massive pressure there , fails .

Other events in Germany 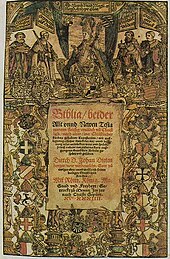 Biblia of both Allt and Newen wills of Johann Dietenberger