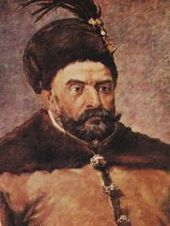 The University of Leiden is founded on February 8th by William I of Nassau-Orange after the Spanish besiegers in the Eighty Years' War had to withdraw without result towards the end of the previous year . It thus becomes the first university in the rebellious Netherlands , from which the Republic of the Seven United Provinces will develop in 1581 .

Southern map of the Grüningen district

Johann Fischart sticks only to a small extent to the French original in the case of his monkey-worthy Naupengeheurliche Geschichtklitterung , a "translation of a novel" from François Rabelais ' Gargantua and Pantagruel into German , but lets his own ideas run wild.

The punching - epic Jerusalem Delivered by Torquato Tasso , appears in the Tasso clashes in the wake of the First Crusade at the siege of Jerusalem describes.

First international chess tournament at the court of King Philip II of Spain in 1575, painting by Luigi Mussini (1886)

The Spaniard Ruy López de Segura , who is considered the best chess player in the world, is defeated by the Sicilian Giovanni Leonardo da Cutro at the first international chess tournament in history at the court of the Spanish King Philip II in Madrid . He wins in the playoff against his compatriot Paolo Boi . Da Cutro then travels to Portugal and also defeats the Portuguese chess master El Morro in Lisbon . 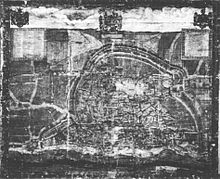