In 1510 , Portugal used its naval dominance in the Indian Ocean , which it had won the previous year in the Battle of Diu , to conquer the city of Goa in India, which after a brief setback led to the consolidation of Portuguese India .

In Europe , the League of Cambrai , which was directed against the Republic of Venice , collapsed after Venice, with diplomatic skill, France under King Louis XII. could isolate.

In Erfurt there is renewed unrest between students and craftsmen of the city and in Brandenburg 38 Jews are burned for alleged desecration of the host . Hamburg becomes a free imperial city and the North Sea coast is affected by several storm surges , which cause even more serious damage because the dikes have only been patched up after last year's floods .

After military defeats , the new Venetian army commander Andrea Gritti can defeat Louis XII. of France stabilize. At the same time, through successful diplomatic negotiations with its opponents, who pursue very different goals, and against minor territorial cessions, the Republic of Venice succeeds in concluding a peace with Emperor Maximilian I and Ferdinand II of Aragon , thereby isolating France. Pope Julius II. Stands on February 24 the fine imposed on the city excommunication again. After a little over a year, the alliance of the League of Cambrai against the Maritime Republic ends .

Antonio Grimani , banished from Venice for high treason in 1499 , is allowed to return to his hometown after more than ten years and generous payments from his family. He receives the office of Procuratore di sopra and acts as a generous patron. Grimani contributes to the cost of building the old proxy offices and has the roof of the campanile , which had been destroyed by an earthquake, restored, for which he donated the gilded figure of the Archangel Gabriel on top.

Other events in the empire

Persecution of Jews in Brandenburg

At the beginning of the year, a gold-plated monstrance and two consecrated hosts are stolen from the church in the Havelland village of Knoblauch . The thief, the Christian tinker Paul Fromm from Bernau , declares under the torture that he had sold one of the hosts to a Jew in Spandau . This triggers a series of accusations, persecutions and arrests of Jews in many cities in the Brandenburg region . Around 100 of those arrested, including the most respected of the communities, were taken to the royal seat of Berlin for further investigation and brought before a court there. After the verdict was pronounced on July 19 on the Neuer Markt in front of the Marienkirche , 38 Jews were burned on a multi-story pyre at the place of execution in front of the Georgentor for alleged desecration of the host, and at least two others who had since been baptized were beheaded. The thieving tinker is also executed. As a result, the Jews are expelled from the Mark Brandenburg . This has the advantage for the sovereign and also for the citizens that debts to Jewish merchants or bankers do not have to be paid off. Jews were not allowed to resettle in Berlin until 1539 .

Contemporary leaflet on the Erfurt revolt

In Erfurt , after the fall and execution of councilor Heinrich Keller and the escape of other councilors in the previous year , unrest broke out again . The reason for this is the city-based university. The humanists teaching in Erfurt around 1500 attract students from all parts of Europe, which makes the University of Erfurt an important economic factor. The students, who often come from affluent backgrounds, however, openly make pacts with the councilors who were expelled the previous year and often provocatively display their wealth. They trigger a second wave of acts of violence, which finds its way into the city chronicle as Erfurt student heat. The Erfurt Collegium Maius and other university buildings are stormed and damaged by the craftsmen, many students leave Erfurt as a result. Until 1514 things were still fermenting in the city between the council and the guilds, the reputation of Erfurt was permanently ruined by the events. Furthermore, there is a protracted trade war with the Saxon dukes in the next few years , which also has long-term negative effects on the economic situation of the city. Even Martin Luther , who at this point in the Augustinian monastery lives and preaches, is an eyewitness to the events. 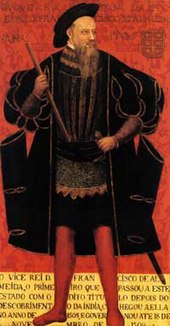 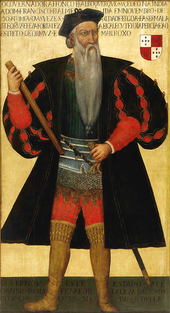 Under Almeida's successor, Governor Afonso de Albuquerque, the Portuguese are expanding their colonial empire in India . In spring they attack the Sultanate of Bijapur, ruled by the Adil Shahi dynasty, and conquer Goa . The sultanate, which is confronted at the same time with a war against the Hindu empire Vijayanagar and the northern neighboring sultanate Ahmadnagar , was able to recapture the place at short notice in August, but on November 25 the Portuguese succeeded in finally taking the cities of Goa and Panaji . From this point on, Goa becomes the capital of the Portuguese-India colony , from where not only sea ​​trade to Southeast Asia and Europe is controlled, but also Christian proselytizing begins.

Survivors of a shipwrecked French ship are settling for the first time in the area around today's Salvador da Bahia in Brazil . Among them is the Portuguese Diogo Álvares Correia, who is given the name Caramuru ( lamprey ) by the local Tupinambá tribe , whom he impresses with his shooting skills .

Shah Ismail I in the battle against the Uzbeks

Beggar family on the way to the city , title woodcut of Liber vagatorum

In November, Martin Luther travels to Rome to protest on behalf of his Erfurt Convention against the unification of the strict observants with the more liberal Augustinian monasteries, ordered from above . There he takes part in a general confession and slides on his stomach up the "Holy Stairs" on the Lateran in order to obtain forgiveness of sins for himself and his relatives. At this point in time he did not yet doubt the Roman practice of penance, but was appalled by the lack of seriousness and moral decay that he encountered in Rome.

On September 5th / 6th , a severe storm surge hit the Jade Bay on the North Sea coast , many of which were broken by the second Cosmas and Damian floods of the previous year, which were only poorly repaired. This so-called St. Magnus flood was followed on November 1st by the All Saints Flood in 1510 , which hit the entire North Sea coast from Flanders to Eiderstedt. Many dikes are breached again and large coastal areas are flooded. The water rises to 3.80 meters above MThw . 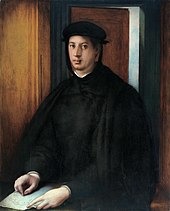