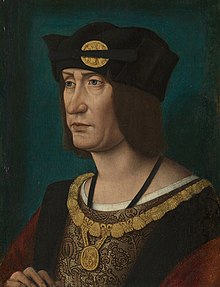 The continued surname of Louis XII. was and is “père du peuple”, “father of the people”. This goes back to a meeting of deputies of the cities in Tours in 1506, when he was offered the honorable designation through a spontaneous proclamation of a subject.

Grave of Louis XII. and the Anne de Bretagne

Front view of the Ludwig wing of Blois Castle

Equestrian statue of Louis above the portal of Blois Castle

Porcupine, Ludwig's heraldic animal, above an entrance to Blois Castle

Louis XII. was the late-born only son of Karl, Duke of Orléans , and his third wife Maria von Kleve . He was the great-grandson of King Charles V and grandson of his younger son Ludwig von Orléans , the progenitor of the Valois-Orléans family , a branch of the Valois dynasty. Essential for his origins and his life was also the descent of the Orléans from Valentina Visconti , since it established an inheritance claim to the Duchy of Milan that was usurped by Francesco I. Sforza in 1450 .

According to the will of King Louis XI. who tried to wipe out the branch line or possibly sensed a competitor for Charles VIII, born in 1470 (a third-degree nephew of Louis XII), Ludwig did not enjoy a good upbringing and, as a young man, was violent and wasteful. With the conclusion of September 8, 1476, a decreed marriage with Jeanne de France aimed at the eradication, since the king's daughter was unsightly and presumably incapable of childbearing.

After the death of Louis XI. (1483) Louis d'Orléans claimed the reign of 13-year-old Karl, but failed before the General Assembly of 1484 against Anne de Beaujeu , the royal sister. He found his refuge in the aristocratic opposition on the side of Francis II of Bretagne , before the Bretons failed in the so-called “crazy war” ( Guerre folle ) and saw their supporter in captivity in 1488 after the battle of Saint-Aubin-de-Cormier . He was rehabilitated in 1491.

When Charles VIII of France waged war over Naples in 1494/95 and had been betrayed by Lodovico Sforza , his former ally, Louis d'Orléans got into trouble in the autumn of 1495: while the king tried to break through on the march back north, Louis was encircled in Novara after attempting to advance against Milan and claim his inheritance rights. With the Vercelli armistice of October 1495, he too moved to France, but had to think about revenge against Milan once more.

With the words "The King of France does not take revenge on the injustice that was done to the Duke of Orléans", Louis effectively amnestied the characters of old court rivalries at his coronation mass in Reims in May 1498 after Charles VIII died young in April of that year.

Hardly got to the government, made Louis XII. assert claims on Milan . He allied himself with Pope Alexander VI until the spring of 1499 . and the Republic of Venice , brought the Swiss on his side and distracted the Roman-German King Maximilian , who had been related by marriage to Lodovico Sforza since 1494. Activities on the Lower Rhine with the Duke of Kleve, a separate peace with Philip the Fair of Burgundy and support for the so-called Swabian and Swiss War did the rest: The power of the Sforza collapsed under one blow by the early autumn of 1499 and finally gave way by April 1500 a rebellion against the French occupation and its support by old Sforza adherents was suppressed (see also Italian Wars ).

The alliance with Alexander VI. 1499 had brought the annulment of the marriage to Jeanne de France and the dispensation for a marriage to Anne de Bretagne , which, connected with Charles VIII, on January 8, 1499 Louis XII. married. Under her old marriage contract, if no Dauphin had survived, she was obliged to marry the heir to the throne. The marriage to Anne was politically relevant, as it tied the Duchy of Brittany to the crown of France and thus added the last great stone to the consolidation of the kingdom.

With his daughter Claude , who was born in 1499 , Louis XII tacted by tying Maximilian and Philip of Burgundy with engagement contracts after the conquest of the imperial fiefdom of Milan and in view of the open Burgundian question . This unredeemed relationship, even forbidden by secret testaments, would have brought Claude together with Charles V , who was born in 1500 . In fact, Louis XII aimed. a connection between his daughter and his nephew Francois d'Angoulême , who, if the king remained without sons, would be heir to the throne of France.

In November 1500 a secret party treaty decreed that Ludwig XII. of France and Ferdinand II of Aragon shared the Kingdom of Naples and thought he was driving Frederick IV of Naples out of the kingdom. After the triumphant march led by French captains, however, the Spaniard split from the agreement before the French were defeated in the Battle of Cerignola in the spring and in the Battle of Garigliano in December 1503 and the Italian south was lost. In addition, Ludwig XII. Alexander VI, who died in August 1503 . and let his son Cesare Borgia gain strength in central Italy, so that French power had already been shaken after a papal change of alliance.

The armistice of Lyon led from February 1504 to a division of Italy between a French north and a Spanish south and had in June 1507 in the Savona accord, where Louis XII. personally met Ferdinand of Aragón, perfect form. A little later, the King of France linked his niece Germaine de Foix with the widowed Ferdinand and settled the question of inheritance from Naples, while at the same time attempting to control the inheritance of the House of Habsburg to the Spanish crowns with the prospect of new descendants from his ally .

In 1506/07 a Genoan rebellion, personally suppressed by Ludwig, had already shaken French power. Maximilian's move to Italy failed in the spring of 1508 because of the alliance with Venice, which had been more or less stable since 1499. Then the League of Cambrai was still an option to punish the lagoon republic, which had so far benefited from the wars of the potentates, in association with Ferdinand and Maximilian: Ludwig personally defeated the Venetians in 1509 at Agnadello .

After the victory over Venice, it was fateful that Pope Julius II left the alliance of Cambrai and its factual participation behind and allied with the Venetians. This culminated after papal provocations in the so-called Holy League , which made Ferdinand apostate and Henry VIII of England threatened in the north: Although the French had won the Battle of Ravenna in April 1512, their power broke after the death of their general in Italy together. Likewise, the client kingdom of Navarre was lost to the Spanish in the Pyrenees.

After the expulsion from Lombardy, the French revision failed at Novara in 1513 because of the Swiss, before their advance against Burgundy could only just be averted with a fictitious chord. The French were also defeated in the Battle of Guinegate and were only saved by the diversion of England in Scotland. In order to reconcile the English, Louis XII, who had been widowed since January 1514, married the very young Mary of England on October 9th of that year .

Without having fathered any further offspring, Ludwig XII died. of France after a few days of delirium on January 1st, 1515. After his death a storm broke out over Paris, which in popular perception was or could be the sign of a great event.

He was buried in the tomb of the French kings, the cathedral of Saint-Denis . When the royal tombs of Saint-Denis were sacked during the French Revolution , his grave was opened on October 18, 1793 and his remains were buried in a mass grave outside the church.

The following children are from the marriage with Anne de Bretagne : 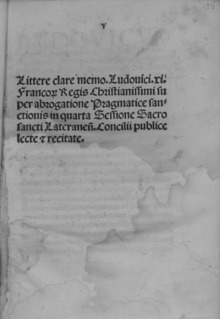