Portrait of Raphael by Pope Julius II in the National Gallery, London

Pope Julius II, detail from the expulsion of Heliodor from the temple , fresco in the rooms of Raphael 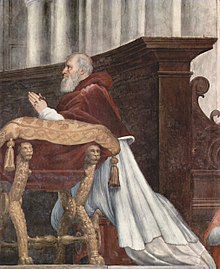 Pope Julius II, detail from the Mass of Bolsena , fresco in the rooms of Raphael

Julius II , originally Giuliano della Rovere (born December 5, 1443 in Albisola Superiore near Savona ( Liguria ), † February 21, 1513 in Rome ), was a Roman Catholic Pope from November 1, 1503 to February 21, 1513 . In 1506 he founded the papal bodyguard, the Swiss Guard, and understood his office primarily as an Italian territorial prince. During his tenure he convened the Fifth Lateran Council . On April 18, 1506, he began building St. Peter's Basilicawith the intention of building the largest and most magnificent church in the world .

Giuliano della Rovere came from a poor background and was born in Albisola, in the province of Savona . His parents were Raffaele della Rovere and his wife Theodora Manerola. He was a nephew of Pope Sixtus IV (Francesco della Rovere). The della Rovere are an Italian noble family of the Renaissance. In addition to Popes Sixtus IV and Julius II, the Dukes of Urbino came from the family from 1508/21 .

Giuliano della Rovere received a considerable income from his dioceses , which, as a friend of the fine arts, he spent on building many palaces. Not only did he have a keen sense for art. His political and military talent was also striking. He appeared to his contemporaries as a vital person of action, whose “mental and physical strength of unusual proportions” they admired. His way of life also had a vital side, as Giuliano della Rovere was the father of three daughters, including Felice Orsini (around 1483 to 1536).

In June 1474 he proved his skill as a military leader when he led an army on behalf of the Curia to restore papal authority in Umbria . A little later he was papal legate to the French King Louis XI.

Within the Curia he was considered the head of the opposition to Pope Alexander VI.

Coat of arms of Della Rovere on a coin of Julius II.

After his predecessor Pius III. Giuliano della Rovere had only been in office for 26 days, on November 1, 1503, after a one-day conclave, he was almost sixty years old and elected 37 of the 38 votes. As a vital man of action and power himself reached the papal throne through prior consultation, he forbade the acquisition of the papal throne through simony under severe church punishments for the future (successfully) . On November 26th, 1503 he was crowned Pope, the day he had determined by astrologers . The Pope's name is a modification of the first name Julianus, but is also intended to remind of Julius Caesar , deliberately contrasting with the predecessor. The personal lifestyle of the “warrior” and pederast Julius, who suffered from the venereal disease syphilis , was not regarded as pious, but as morally decent in office.

As with other rulers of the Renaissance period, personal and statesmanlike interests as well as large-scale patronage flow into one another with Pope Julius II. Julius II must be seen less as the spiritual head of the Catholic Church, but first and foremost as the Italian territorial prince. His power politics served to regain the under the pontificate of Alexander VI. lost territories and a general strengthening of the papal state . It can be recognized as his merit that in the midst of the upheaval in which the Italian state system found itself, he made a decisive contribution to restricting Italy from foreign rule by the various European powers or to protecting it entirely.

Right at the beginning of his reign he put Cesare Borgia prisoner to various permanent places, which this is under his father Alexander VI. had acquired to retake. The French King Louis XII. and Emperor Maximilian I on December 10, 1508 in Cambrai signed the treaty of alliance against Venice and joined Pope Julius II in March 1509. The aim of this League of Cambrai , to which Ferdinand II of Aragon belonged, was on the one hand to curb Venice's claims to power in northern Italy, on the other hand to strengthen its own influence. The devastating defeat of the Venetian troops on May 14, 1509 at Agnadello in Lombardy for the first time shook the great power of the Doge Republic. On February 24, 1510 Julius II withdrew the interdict against the Venetian Republic. Julius II had recaptured Romagna from the Republic of Venice .

After settling the territorial question with Venice , Julius II wanted to take action against France's policy of conquest in Italy and for this purpose he concluded the with Emperor Maximilian I , the Confederation , the Republic of Venice and King Ferdinand II of Aragon on October 4, 1511 Holy League . The political goal of this new coalition should be the expulsion of the French from Italy . Northern Italy was once again the scene of bloody clashes: France, under Gaston de Foix, won the battle of Ravenna in 1512 , but was unable to stop the expulsion from northern Italy that Julius II was promoting (see Italian Wars ). The Papal States again succeeded in regaining several cities and areas.

His military interests were very strong. Because he had no inhibitions about killing people and knew no mercy, Martin Luther called him a "blood drunkard".

To protect himself, he founded a new papal bodyguard , the Swiss Guard . On January 22nd, 1506, a troop of 150 Swiss from the canton of Uri entered the Vatican for the first time.

The French King Louis XII. went not only belligerent against the Papal States, but also tried to undermine the ecclesiastical authority of Julius II. a. agreed to the holding of a general council called for by French cardinals. The schismatic church assembly was called to Pisa on September 1, 1511 . Julius II's answer to this challenge was not long in coming. He convened an ecumenical council for April 19, 1512 in the Lateran . However, this Fifth Lateran Council did not end until the pontificate of Leo X on March 16, 1517. This council only decided on a series of insignificant reform decrees, which, moreover, were never implemented.

In addition to the continued military campaigns, individual and political striving for power, Julius II also availed himself of generous patronage in order to increase the reputation of the papacy and that of the Papal States and, above all, to be sure of his eternal fame. For his fame while still alive and his fame, this splendid Renaissance pope drew the greatest artists into his service.

Shortly after his enthronement on the Petrus See, the Pope was moved by ambitious plans: He wanted to completely redesign Rome in terms of urban development and build a new building in place of the venerable, early Christian church Alt-St. Peter from the 4th century, which was partly dilapidated. The largest and most magnificent church in the world should bear witness to the power of the Rovere Pope. The center of this gigantic planned structure should be dominated by his own colossal tomb . After three years of preparatory work, Julius II ceremoniously laid the foundation stone on April 18, 1506 .

He hired Donato Bramante , who was almost the same age , for the new building of St. Peter's Basilica , for the tomb Michelangelo , whom he also commissioned to paint the vaulted ceiling of the Sistine Chapel , and Raphael won over the stamping for the work in the private chambers in the Vatican Palace .

His indomitable will to power and his boundless ambition became more and more visible, because despite all protests, including those of the cardinals, he supported his architect Bramante and gave him a free hand. The irascible Pope had buildings torn down, squares enlarged and streets laid out. It is telling that both had not exactly flattering epithets: Julius II .: Il terribile , the terrible, and Bramante: Maestro rovinante , master of destruction. 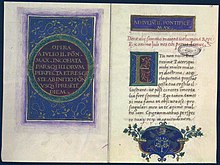 The beginning of the preface by the papal librarian Lorenzo Parmenio to his biography of Julius II in the dedication copy for the Pope, the manuscript Biblioteca Apostolica Vaticana, Vat. Lat. 3702, fol. 1v – 2r

Julius tomb in the church of San Pietro in Vincoli

Julius II died at the age of 69 on the night of February 20-21, 1513 in Rome. His cenotaph , the Julius tomb , is in San Pietro in Vincoli (St. Peter in Chains), where the world-famous Moses figure of Michelangelo forms part of the monumental tomb. His corpse rests together with that of Sixtus IV under a simple marble slab in St. Peter's Basilica below the monument to Pope Clement X. It is almost ironic that the Pope who wanted to rebuild St. Peter's for his magnificent tomb is one of the simplest, has hardly noticed tombs.

His most ardent wish, namely to unite the Italian peninsula under the leadership of the Pope, remained unfulfilled.