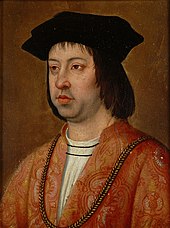 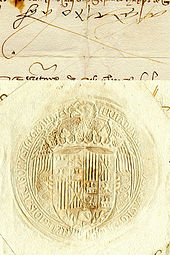 He was the only son of John II of Aragón and his second wife Juana Enríquez . As early as 1466 he was named co-regent of Aragon and in 1468 King of Sicily (as Ferdinand II ). On October 19, 1469, he married the Infanta Isabella I of Castile and took over with her after the death of Henry IV ( the poor ) of Castile in 1474 the rule of Castile and León. There he is counted as Ferdinand V. In 1476 they defended their rule against Portuguese interference in the War of the Castilian Succession .

After the death of his father Johann in 1479, the Spanish unification process was pursued even more, but only Isabella was allowed to make the decisions in Castilian affairs, and both empires were administered separately.

Campaigns against the Emirate of Granada 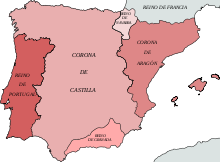 In 1482 Ferdinand began a series of campaigns against the Emirate of Granada . In 1484 he besieged Setenil de las Bodegas , in 1485 later he crossed the area west of Málaga and took the city of Ronda. The inhabitants of the city and its surrounding area received the status of Mudejar serfs ( sierbos mudejares ) of the king and queen. Ferdinand promised to “preserve the law of Muhammad ” and allowed the Muslims to consult their own legal scholars in legal disputes, who were allowed to rule according to the Sharia and the Sunna . In the fall of 1485 Ferdinand took an important political maneuver: He let the captive Nazari , Boabdil free and sent him to Muslim territory. This triggered a wave of unrest among the Muslims of Granada, because Boabdil's uncle Muhammad al-Zagal (XIII) also claimed control of Granada and, supported by the Abencerrajes , took up the fight against Boabdil. In 1486 Ferdinand continued the military fight against the emirate and was able to force the city of Loja to surrender with his artillery . In 1487 he brought down Vélez-Málaga . In 1492 the conquest of the kingdom of Granada was completed, with which the last Moorish state on the Iberian Peninsula disappeared.

On March 31, 1492, Ferdinand and Isabella issued the Alhambra Edict in the Alhambra after the victory against the Moors, which was only possible thanks to the massive financial support of their Jewish bankers and advisers Abraham Senior and Isaak Abravanel . In this edict the Jews were asked to leave Spain and all Spanish possessions within three months, unless they converted to Christianity. The edict sparked the unprecedented persecution of the Jews under the direction of the Inquisition and its fanatical leader, the Grand Inquisitor Tomás de Torquemada , Dominican and confessor of the Queen. The expulsion of the Jews from the Iberian Peninsula - a little later Portugal also joined this policy - meant a great bloodletting for science and art as well as for the economy, which could only be absorbed by the gold supplies from the new colonies. 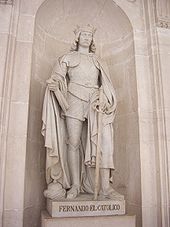 The year 1492 brought not only the conclusion of the conquest of the Kingdom of Granada and the beginning of an unprecedented persecution of Jews for Spain , but also the discovery of America by Christopher Columbus , who sailed on behalf of the royal couple. After Christopher Columbus discovered the New World for Spain, this ruled the land and sea on the eastern and western coasts of the Atlantic Ocean with almost no resistance. In the Treaty of Tordesillas (1494) the new world between Spain and Portugal was established by Pope Alexander VI. divided up. On Ferdinand's order, the so-called Requerimiento was created, a text in which the Indians of South America were asked to unconditionally surrender and simultaneously submit to the rule of the Spanish crown as representatives of the Catholic Church and the Pope.

Ferdinand II of Aragón and Isabella of Castile at their wedding

On August 21, 1496 there was a double wedding: Johanna von Kastilien (Johanna die Wahnsinnige), the daughter of the royal couple, married the Habsburg Philip the Fair , while the heir to the throne married Don Johann Margarethe of Austria . However, the heir to the throne Johann died on October 4, 1497, and after Ferdinand's eldest daughter Isabella , Queen of Portugal, died the following year, Johanna succeeded the throne.

Ferdinand planned to merge Portugal with Spain and expand the possessions in Italy, but they were no longer fully implemented. The foundations for these plans had already been laid with the marriage of the eldest daughter Isabella to the Portuguese heir to the throne Alfons . After his death she was married to his successor Manuel . However, she and her only son, who would have been heir to three kingdoms, soon died. After her death, Manuel married her sister Maria .

The youngest daughter Katharina was engaged to Arthur Tudor as a child . After he died after only four months of marriage, Katharina fell victim to the dispute between her father and father-in-law Henry VII of England over the dowry , which had not yet been fully paid , before she married Henry VIII in 1509 .

The happy coincidence of world events and a number of outstanding ministers ( Mendoza , Jiménez , Gonzalo de Cordova and others), combined with the statesmanship and ability of the royal couple, brought about a rapid upswing in Spain under their government. One of the main strives of Ferdinand and Isabella was to strengthen royal power over the nobility and clergy, and to reacquire the crown possessions that had come into the hands of the great vassals; In addition, the judiciary was strict and the judicial system tightened with the introduction of the Santa Hermandad ('Holy Brotherhood').

The union of the grand masterships of the three religious knightly orders with the crown, which as a result was able to confront the nobility all the more energetically, ensured a great increase in income and influence . The Catholic kings also knew how to exert their influence on the ecclesiastical benefit system ; the most powerful instrument, however, was the Inquisition , that religious judgment that was set up in the 13th century, but then fell into disrepair and was then revived. The Inquisition tribunal was dependent on the crown and served both ecclesiastical and political purposes. 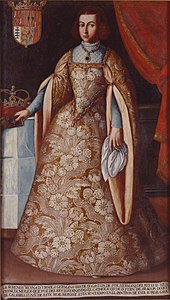 By participating in the general politics of Europe, in which he proved himself as a masterly diplomat , Ferdinand achieved the greatest successes for Spain; In 1492 he came into the possession of the counties of Roussillon and Cerdaña , in 1495 he formed the large anti-French league.

Through clever negotiations he persuaded France to partition the Kingdom of Naples , which the two powers occupied jointly in 1501, but in 1503 Ferdinand seized the entire empire, as King of Naples he was Ferdinand III. In 1512, with the conquest of the long courted Navarre , a state unit was created on the Pyrenean Peninsula and rounded off on all sides, and southern Italy was also added to the empire.

After Isabella's death in 1504, the union of the two crowns was de facto completed, as Ferdinand now also took over the rule in Castile on behalf of his daughter Johanna , who was considered insane . In his second marriage, Ferdinand married on March 22, 1506 in Dueñas Countess Germaine de Foix , a daughter of Jean de Foix , comte d'Etampes, vicomte de Narbonne, and Marie de Valois-Orléans. She was a niece of King Louis XII on her mother's side . of France . Germaine gave him his son Johann (* / † May 3, 1509), príncipe de Girona . The marriage gave him the pretext for an additional expansion of his territory. He began the conquest of the Kingdom of Navarre south of the Pyrenees and was able to complete it by 1512.

The eldest daughter Isabella was married to the Portuguese King Manuel I after the death of the Portuguese heir to the throne, her first husband. The hoped-for unification of Spain and Portugal failed, however, because both the princess and her only child soon died. However, since Ferdinand's son Johann had died shortly before, the Habsburg Philip became the heir to the throne of Castile as the husband of the now eldest daughter Johanna. He reigned after Isabella the Catholic's death in 1504, but died in 1506. Johanna was considered incapable of governing because of the madness that was said of her and so Ferdinand took over the reign for all of Spain until his death in 1516. However, recent studies have shown that that Johanna was by no means insane. Rather, it was a matter of the political calculation of her father and later also of her son Charles I to disempower the rightful heir to the throne. There is no historical record of an actual mental illness.

Ferdinand died on January 23, 1516 in Madrigalejo (today's province of Cáceres ). His remains, along with those of his first wife, Isabella the Catholic, are in the crypt of the Capilla Real (Royal Chapel) in Granada . The epitaph reads:

"The annihilators of the Mohammedan sect and eradicators of heretical falsehood, Ferdinand of Aragón and Isabella of Castile husband and wife, all called the Catholics, surrounds this marble tomb."

He was followed in Spain by Philip and Johanna's son, Charles I, as the Roman-German Emperor Charles V.

Although Ferdinand II acquired Byzantine titles from Andreas Palaiologos , these were neither used in coats of arms nor in the titular.

With Isabella I of Castile he had the following children:

Another five children died at birth or shortly afterwards.

With Countess Germaine de Foix he had a son:

Ferdinand II was also the father of the illegitimate children Alfons , Johanna, Maria and another Maria.