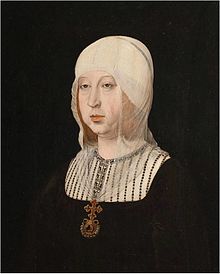 Queen Isabella I of Castile, painting from the early 16th century by her court artist Juan de Flandes .

Signature of Isabella I of Castile

Isabella was the daughter ( infanta ) of King John II of Castile and León and his second wife Isabella of Portugal .

Detail from the altarpiece of the Colegiata de Santa María church in Toro (Spain) . Perhaps Isabella of Castile is depicted, but perhaps also Saint Catherine of Alexandria

Isabella was stout, with red-blonde hair and slanted green eyes. She enjoyed excellent training in the Santa Ana Monastery in Ávila , with emphasis on physical training, so that the princess was an excellent rider. She had been raised in the monastery to be a confident young woman.

Immediately after her father's death in 1454, she and her younger brother Alfonso and her mother were driven from the court, which had plunged the overly sensitive mother into deep melancholy. Instead of taking care of her children, she buried herself in her own misfortune. Since the people were dissatisfied with King Henry IV , their half-brother from the first marriage of John II to Marie of Aragón, riots broke out and Alfonso, who was only thirteen, took up arms, and managed to win a surprise victory over the half-brother. However, he died a short time later after eating a trout. The exact cause has never been clarified.

As a young woman, her half-brother Henry IV wanted to marry her - she was first promised to Karl von Viana , Prince of Navarre, a good thirty years her senior , who, however, died suddenly. She was able to successfully defend herself against the next candidate, Alfonso of Portugal, but not against the subsequent candidate, Pedro Girón, the brother of the Grand Master of Calatrava; however, this fiancé also died of diphtheria before the wedding . Now Henry IV wanted his sister with Charles de Valois , Duke of Berry and brother of King Louis XI. , marry. The now grown-up, however, wanted to choose her future husband herself and chose Ferdinand , the future King of Aragón, who corresponded to her ideas of a determined, brave and clever husband. She was so emancipated that she got in touch with Ferdinand through her adviser, the Jewish financier Abraham Senior , and proposed to Ferdinand, who at the age of seventeen had two children with a mistress. This accepted. Since official advertising was not possible because of the half-brother, Ferdinand disguised himself as a donkey driver and traveled with only a few companions to see her in Valladolid , where she had fled from her half-brother. Isabella married Ferdinand on October 19, 1469.

Wedding picture of Ferdinand and Isabella, 1469

After the death of her brother Henry IV, Isabella ascended the Castilian throne with her husband in 1474. Although raised Johanna La Beltraneja that supports illegitimate daughter of Henry declared eligible for the Castilian crown and was of a section of the nobility and of Portugal; but Isabella defeated these opponents, and the Battle of Toro on March 17, 1476 secured her crown.

Monument in Granada: Columbus explains his travel plans to Queen Isabella I.

Isabella and Ferdinand ruled their kingdoms of Aragón and Castile together from 1479, although Isabella remained the sole "owner" of the Crown of Castile; this created the basis for a whole Spanish kingdom. Christopher Columbus owed his support to his company in 1486, which resulted in the discovery of America under the Spanish-Castilian flag in 1492. This created the basis for the later Spanish colonial empire .

Based on the papal bull Exigit sincerae devotionis issued by Pope Sixtus IV in 1478 , Isabella and Ferdinand introduced the Inquisition into their empire. In 1488 they created the Consejo de la Suprema y General Inquisición . The Inquisition was mainly directed against Jews who had converted to Christianity , the so-called Marranos , who were suspected of secretly still adhering to their earlier faith. More than half, in Guadalupe around more than three quarters, of all those accused were sentenced to death and executed. The conquest of the emirate of Granada in January 1492 marked the end of the " Reconquista " and thus the 700 year long presence of the Moors in large parts of the Iberian Peninsula. As a result, Ferdinand and Isabella proceeded with great brutality against Jews and Muslims. With the Alhambra Edict of March 31, 1492, all Jews in the territory of Isabella and Ferdinand ( Sephardim ) were forced either to convert to Christianity or to leave the country. Pope Alexander VI awarded the couple the title of reyes católicos ( Catholic Kings ) in 1494 . In 1502 the remaining Muslims were expelled, which meant another economic and artistic bloodletting.

Isabella and Ferdinand introduced the Santa Hermandad (Holy Brotherhood), a nationwide police and judicial system that replaced the previously common local hermandades and restricted the rights of the local aristocracy.

Isabella died in Medina del Campo on November 26, 1504. Her remains are in the crypt of the Capilla Real (Royal Chapel) in Granada , Andalusia. The epitaph reads:

"The annihilators of the Mohammedan sect and eradicators of heretical falsehood, Ferdinand of Aragón and Isabella of Castile consort and consort, all called Catholics, surrounds this marble tomb."

In 1504, her daughter Johanna and her husband Philip the Fair of Habsburg took over rule in Castile.

With Ferdinand II she had ten children, five of whom were stillborn or died shortly after birth. The surviving children are:

See also : Procedure for the canonization of Queen Isabella of Castile

In 1974 Pope Paul VI opened. the beatification process. Thereby the title " Servant of God " was awarded.

Commons : Isabella I of Castile  - Collection of images, videos and audio files