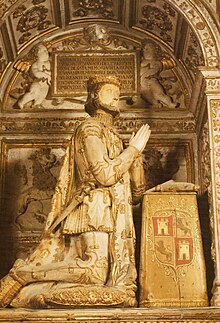 Grave of Johann I.

John I ( Spanish: Juan I de Castilla ; born August 24, 1358 in Épila, Saragossa ; † October 9, 1390 in Alcalá de Henares ), King of Castile and León , was the son of Henry II and his wife Johanna, daughter by Juan Manuel of Villena , head of a younger branch of the House of Castile.

At the beginning of his reign he had to assert himself against the hostility of John of Gaunts , who was a son of Edward III. from England was. He claimed the crown because his wife Konstanze was a daughter of Peter the Cruel , who had been disempowered and murdered by Johann's father. The King of Castile eventually bought the claim from his English rival by arranging a marriage between his son Henry and Catherine , daughter of John of Gaunt, in 1387 .

After the death of his father-in-law in 1383, Johann tried to enforce his wife's claims to the throne. The revolution of 1383 , a time of civil unrest and anarchy in Portugal, followed. The national feeling of the Portuguese people was against him and he was crushed at the Battle of Aljubarrota on August 14, 1385.

Intentionally historical reminiscence of the former Kingdom of Asturias , which the Arab conquest of the Iberian peninsula had defied generally believed, and therefore as the nucleus of the Christian reconquest ( Reconquista was seen), built King John to the material supply of the heir to the throne in 1388, the still existing Principality of Asturias . Since then, the title of Prince of Asturias has been borne by the Castilian, later Spanish, Crown Prince .

King John died in Alcalá on October 9, 1390 in a riding accident while he was taking part in a fantasia with so-called farfanes (riders in Arab style) .

From the marriage with Eleanor of Aragón, daughter of King Peter IV . :

From the marriage with Beatrix of Portugal: