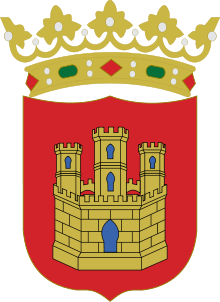 Coat of arms of the Kingdom of Castile

The Kingdom of Castile (Spanish Reino de Castilla , Latin regnum Castellae ) was one of the medieval kingdoms of the Iberian Peninsula . It existed as an independent kingdom from 1065 to 1230.

In 1230 the kingdoms of Castile and León were finally united. This united kingdom is known as the Crown of Castile . Its kings gradually conquered the south of the Iberian Peninsula from Muslim rulers in the Reconquista until 1492. After America was discovered in 1492 , the first colonies arose in the New World , which also belonged to the Crown of Castile.

The union of the Crown of Castile and the Crown of Aragon began as a personal union through the marriage of the Catholic Kings in 1469 . It was completed in 1516 when the future emperor Charles V became king of both empires by inheritance and when Charles I founded the kingdom of Spain .

Castile county around the year 1000 AD

The first mention of the name " Castile " appears in a document from the year 800:

"We have a church in honor of St. Maarten, in the Patriniano area in the Castile area."

In the Chronicle of Alfonso III. , a king of Asturias in the 9th century, it is said:

This historical core area was around the city of Burgos and was conquered by the kings of Asturias in the 7th and 8th centuries . It had previously been under the rule of the Moors . Castile was repopulated ( repoblación ) in the 9th and 10th centuries with people from Cantabria , Asturias , the Basque Country and those of Visigothic descent ; a Romanesque dialect , Castilian, gradually developed .

The first Count of Castile, Rodrigo, was appointed by Ordoño I of Asturias in 860 . At the beginning of the 10th century, Count Gonzalo Fernández dedicated himself to the repopulation of the recaptured areas. In 931 the Castilian counties were united by Count Fernán González , who established Castile , which had previously been under the sovereignty of the Kingdom of León , as an independent and hereditary county.

After the assassination of Count Garcia Sanchez in 1028, Castile fell to King Sancho the Great of Navarre, who was married to his sister Mayor . In 1035 he bequeathed his son Ferdinand a scaled-down Castile as an inheritance . As a result, territorial conflicts that lasted for centuries began between the kingdoms of Navarre and the emerging Castile.

Establishment of the Kingdom of Castile (11th to 12th centuries)

Ferdinand I was married to Sancha, the sister of Bermudo III. from Leon . Ferdinand provoked a war against his brother-in-law, King Bermudo III, in 1037 . of León, who fell in the Battle of Tamarón and then united all of León with its previous rule to form the Kingdom of Castile. Since Bermudo III. had no children, his brother-in-law Fernando I appropriated the crown of Leon on behalf of his wife. He was anointed king on June 22nd, 1038, making him the first king of Castile. This was the first unification of the kingdoms of Castile and León.

Ferdinand I repulsed an attack by his brother Garcias of Navarre in the Battle of Atapuerta in 1054 ; he united the Navarres area on the right bank of the Ebro with Castile and extended the borders of his empire considerably to the south through successful battles with the Arabs .

At his death in 1067 he divided his kingdom among his three sons, of whom Sancho II Castile, Alfons VI. León and Asturias as well as García Galicia received. His daughter, Urraca , had Zamora .

Sancho II of Castile ruled Castile from 1067 to 1072. He was with his brother Alfonso VI. allied, and together they conquered Galicia. After an assassination (not proven), however, Alfonso VI took possession. (1072–1109) of the Empire of Castile. He was now the ruling king of León, Castile and Galicia.

Alfonso VI led victorious wars against the Moors in the course of the Reconquista . In 1080 he lost his only son Sancho in the Battle of Uclés .

Alfonso VI moved closer to the other kingdoms in Europe, especially France, where his daughters Urraca and Teresa married Raymond of Burgundy and Henry of Burgundy . Under him the Roman hierarchical church system was also established in Castile. The council introduced the Roman rite in Burgos in 1080 , which replaced the previously common Mozarabic rite .

Alfons' daughter Urraca (1109–1126 Queen of León-Castilla) was heir to the throne. At the request of her father, she married Alfonso I of Aragon . Although Pope Paschal II had previously declared the marriage null and void, she remained with him until that point.

The union of the two kingdoms into one kingdom of Hispania was unsuccessful. After a bloody civil war from which Portugal emerged as an independent nation in 1139 , the kingdoms separated again. Thanks to the help of the Castilian nobility , the "Queen of Spain", Urraca, her son Alfonso VII Raimundez was able to at least receive the kingdom of Castile.

Alfonso VII succeeded in annexing the kingdoms of Navarre and Aragon. They gave up their rights on the Mediterranean coast in favor of the new Union. Alfonso VII was crowned Imperator Legionensis Hispaniae ("Emperor of Spain") in Leon in 1135 . He continued fighting the Arabs.

As in every medieval empire, supreme power “by the grace of God” fell to the king. But from the beginning there were rural and urban councils that made decisions about everyday problems.

These councils represented the various classes of the population. They also got the election of judges and civil servants, mayors, clerks etc.

Given the growing power of the communes, there was a need for communication between the king and the resulting courts in 1188 in the Kingdom of Leon and its corresponding versions in the Kingdom of Castile in 1250. The courts were run by a small group of medieval townspeople they had no legislative powers, but it was a point of unity between king and kingdom, something that the kingdoms of Leon and Castilla pioneered.

Burgos Cathedral (Capital of the Kingdom)

There was a scientific breakthrough in Castile in the 12th century. In the first half of the 12th century, a translation school was founded in Toledo , whose main task was to translate Latin works of various philosophical and scientific origins from ancient Greece and the Arab world . Many European thinkers, such as Daniel Morley, traveled to Toledo to hear the lectures.

The Camino de Santiago was also used for the exchange of knowledge between the kingdoms of Castile and León and Europe.

Final union with the Kingdom of Leon (13th century)

Now violent civil wars broke out again , until 1230 through a treaty Ferdinand III. , Son of Henry's sister Berengaria and King Alfonso IX. of León, was recognized as King of Castile and León.

It was stipulated that both states should form a single, indivisible empire in the future. Succession should pass to the eldest son and, in the absence of male heirs, to the female line. The new regent profited from the decline of the Almohad Empire and conquered the Guadalquivir Valley, while his son Alfonso took on the kingdom of Murcia. Ferdinand III, the saint (1230–1252), conquered Córdoba in 1236 and Seville in 1248 and brought the country to the south coast under Castilian rule, as well as Granada in feudal dependence. The defeated kingdoms reserved the jurisdiction.

It followed from 1252–1284 Ferdinand's eldest son, Alfonso X , the sage, who extensively supported the arts and sciences. However, he burdened the country with new taxes and aroused the people by excluding the sons of his firstborn son Ferdinand from the throne and appointing his second son Sancho as his successor, a controversy for the throne in which France participated and the power of Castile was significantly weakened overgrown and led the nobility to defiance and arrogance. Under Sancho IV (1284–1295) an outrage of the powerful nobles broke out. Several pretenders rose up against the underage Ferdinand IV (1295–1312), whose legitimate birth was doubted, and the neighboring empires also sought to expand at the expense of Castile; but his mother, María de Molina , who reigned, defied these dangers. New disputes broke out when, after Ferdinand's sudden death, the crown was passed to his two-year-old son Alfonso XI. (1312-1350) fell; the empire was completely shattered by these internal struggles.

It was not until 1335 that Alfons succeeded in mastering the revolt through cruelty and deceit and through the approval of the Alcavala (a tax) to gain an independent position. He then conquered Algeciras in 1344 . He died during the siege of Gibraltar in 1350.

He was followed by Peter the Cruel (1350-1369), who caused his half-brother Heinrich von Trastámara to rise up through his atrocities and was beaten and killed by him in 1369 near Montiel .

Crown of Castile until 1400

His son John I (1379-1390) waged war with Portugal and England for possession of his throne, but agreed in the Treaty of Bayonne in 1387 with the House of Lancaster and in 1389 with Portugal. He was followed by the eleven-year-old Heinrich III. (1390–1406), whose minority gave rise to disputes over the imperial administration that shattered the country terribly. As the young 14-year-old king in 1393 declared of age , married with Catherine of Lancaster and the government introduced themselves. Under him were 1,402 Canary Islands rediscovered.

Union of Castile and the Crown of Aragon (16th century)

With the marriage of Ferdinand II of Aragón to Isabella I of Castile on October 19, 1469, the process of Spanish unification was advanced in Valladolid . At first it was a pure personal union that lasted until 1504. Even after this first agreement through the marriage of the Catholic Kings , the two parts of the empire - the Crown of Castile as well as the Crown of Aragon and Navarre - retained their own legal systems and institutions. In Castile, for example, royal edicts were signed by both rulers together; only Ferdinand signed for the lands of the Crown of Aragon. The only common institution in the kingdoms of Aragon and Castile between 1479 and 1504 was the Spanish Inquisition .

The kingdoms also acted differently in economic terms: Aragón was more oriented towards the Mediterranean , while the Atlantic Ocean was more important for Castile . The discovery and conquest of America from 1492 took place in the name of the Crown of Castile.

After Isabella's death in 1504, Joanna and Philip I took over the government in Castile. Ferdinand was only ruler in the lands of the Crown of Aragon. After the death of Philips in 1506, Ferdinand took over the representation for his daughter Johanna, who was considered insane.

Transition to the Kingdom of Spain

When Ferdinand died in 1516, his grandson Charles I inherited the Aragonese crown. As a result, the two empires were politically united - the Kingdom of Castile lost its independence. Charles became the first king of Spain (and in 1519, as Charles V, also Roman-German emperor). His mother Joanna remained Titular Queen of Castile and León and Titular Queen of Aragón until her death in 1555 .

After the end of the Spanish War of Succession (1701–1714), King Philip V dissolved the institutions of the old kingdoms. In the Decretos de Nueva Planta , the Castilian legal and administrative system was largely extended to the other parts of the empire, above all to the countries of the former Crown Aragon. In this way, Spain was transformed into a central state by the Bourbons .

Symbols of the Kingdom of Castile

A golden house with a blue gate and blue windows has been a symbol of the Kingdom of Castile since the reign of Alfonso VIII (1147–1214). B. used for shields and banners.