Conquistador and Conquista are redirects to this article. For further meanings, see Conquistador (disambiguation) . 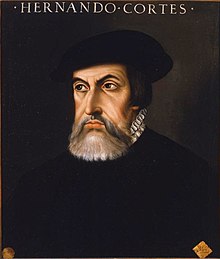 The process of conquering and opening up the Central and South American mainland, which lasted over a century, is known as the Conquista ("conquest [of America or the New World]"). In the eyes of most Spaniards of the time, it was the temporal and coherent result of the reconquest of the Iberian Peninsula from the hands of the Moors ( Reconquista ), which was completed in 1492 .

In the century after the discovery of America by Christopher Columbus entered adventurers and soldiers of fortune, the New World , the later Spanish chroniclers as los conquistadores were called. Their goal was to get rich quick through conquest. The conquistadors undertook their expeditions into the vastness of South and Central America mostly on their own account and risked their lives without the support of the Spanish crown. They were subordinate to the Consejo de Indias .

In principle, any conquistador who managed to find financial support could become a conquistador. First, the conquistador signed a contract ( Capitulación , Asiento ) with the Casa de Contratación , the authority set up specifically for this purpose. The contract had the character of a license or a monopoly and laid down the general conditions for the company. Few conquistadors could afford to hire real mercenaries. Often the teams of the conquistadors were penniless Spaniards or veterans of the Reconquista . They were not official soldiers, but free citizens and participated directly in the profits. They had to pay for their armor, weapons and horses themselves. The possibility of social advancement made the service very attractive. While first-born sons in Spain inherited the inheritance of their fathers, the subsequent sons often only had the option of conquering their own property and thus social recognition as a conquistador by force of arms.

The licensee undertook to develop a provincia , a limited area, the extent of which was often underestimated due to the unclear geographic conditions. This included in particular the construction of settlements and cities as well as the conversion of the Indian population to the Christian faith. In addition, the customs regulations for the import and export of goods were precisely defined in the contract . The fifth part of all income from the colony had to be paid as tax to the crown ( Quinto Real , "royal fifth"). In return, the licensee was allowed to determine the highest civil and military representatives with the governor ( Adelantado ) and the captain general ( Capitán General ) and had a largely free hand in running the company.

The ultimate goal of the conquistadors was not the establishment of settlements, but the subjugation of Indian gold and silver empires , with the myth of El Dorado playing an important role. In order to achieve this goal, they mostly proceeded with great brutality against the indigenous population . The Requerimiento , introduced in 1513, gave the conquistadors and the missionaries accompanying them pseudo-official approval and justification for their actions. After winning the booty, many conquistadors tried to disadvantage both the state and their own followers and financiers. Conversely, many royal bureaucrats who came later succeeded in disempowering conquistadors, so that many conquista companies ended in legal proceedings. Hernán Cortés spent his twilight years fighting litigation.

From 1560 the influence of Spain decreased, for the first time English and French conquistadors fought over lucrative provinces. The time of the conquistadors ended with increasing settlement and the establishment of viceroyalty from 1600 onwards.

The fall of the indigenous empires

The military advantages of the conquerors

During the conquests of the great empires of the Aztecs , Incas and Mayas , the conquistadors often faced an overwhelming majority of Indians (e.g. 170 Spaniards against around 4,000 to 7,000 Incas in the battle of Cajamarca ). The Aztecs, like the Inca, underestimated the technical superiority of the conquistadors and, above all, their superiority in the tactical and strategic battle of conquest. In the Reconquista , the Spaniards had developed successful tactics against the Moors over the centuries, often outnumbered .

The multiple superiority of available warriors made it simply impossible for the Indians to correctly assess the danger of the tiny foreign troops. The lack of knowledge of the cultural background of the Spanish opponents, their real intentions and the own fetters of religion made it difficult for the Indian rulers to react correctly. In every natural event the priests saw terrible omens from the gods, which often paralyzed the political leadership.

The empires of the Incas and the Aztecs, for their part, were built up through wars of conquest. The conquered peoples made tribute payments to the Indian conquerors and were often not integrated into the empire. There were many different peoples, languages ​​and religions in the great empires. There was no uniform administration (except in the Inca Empire), no uniform jurisdiction and no standing army that kept the subject regions permanently occupied. The empires were accordingly unstable. The conquistadors took advantage of the discontent of the conquered peoples and won them as allies against the rulers of the great empires.

Collapse of the local population

The number of Indians who lost their lives in New Spain between the years 1500 and 1600, either directly through the conquistadors or indirectly through famine or diseases such as smallpox introduced from Europe , is estimated to be around 15 million. Precise information about this is not possible. The population of the Inca Empire is estimated at 4 to 15 million people in 1492. Due to the limited amount of data from this period, more precise information is not possible. At the end of the 16th century, probably only a million people lived in the area.

The impact of the epidemics on Indian society should not be underestimated. The diseases of the Europeans not only wiped out the common people. Nor did they stop at the chiefs, medicine men, and storytellers. Whole peoples were often robbed of their cultural identity and cohesion within a few weeks. This made them vulnerable to the missionary zeal of the conquistadors.

The basic equipment of the conquistadors included armor ( Spanish armor ), a helmet and a sword as armament .

The horse was an unknown animal in America and the Indians first thought it was a monster. The sight of the Spanish riders on horseback gave the Indians the impression that this was a single being.

The riders were armed with rapiers and light lances . They were protected by light armor with a collar , helmet, steel rails and knee pads on their legs. The main advantage of the cavalry was their speed. It allowed the conquistadors to attack Indian opponents at will and wreak havoc in a flash. A knowledgeable rider never wasted his horse in battle. He kept it in a constant, steady trot, with the reins slightly curtained. If he had an opponent in front of his lance, the horse shortened the distance with just a few gallops so that the rider could kill the Indian. The cavalry was the ideal weapon, both for the attack and for the subsequent retreat of the Indians, since the Spaniards did not let their opponents escape if possible. The riders always worked together in small groups of three or four men to support one another. In a battle with an outnumbered enemy, the cavalry held back and waited for the volleys of the crossbowmen and arquebusiers. After the volley, the riders dashed forward into the gap that the volley had torn in the opposing ranks and wreaked havoc there. On other occasions the cavalry attacked first, shaking the enemy. The infantry did not intervene until the Indians turned to flee. 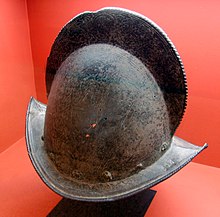 Although the cavalry was the strongest weapon of the Spaniards, the main burden of the fight was carried by the infantry with their lancers, halberd-bearers and swordsmen ( tobogganers ), crossbowmen and arquebusmen . The infantry usually protected themselves with steel helmets ( Cabasset or Morion ), neck protection, breast armor and with abdominal protection (this armor was called three-quarter armor). Some soldiers used a lighter and more flexible armor made of leather, which was additionally covered with steel plates. There was a peculiarity with the conquest of New Spain (Mexico). Over time, many Spanish soldiers, including Hernán Cortés , left the heavy and cumbersome tank here. They traded it for armor made of thick, padded cotton . They had copied this light armor from the Aztecs. It consisted of a two-finger-thick layer of cotton and was as tough as felt. Since there was no cotton in many other places in the New World, the conquistadors kept their iron armor there.

Since the Indians fought individually rather than using group tactics, it was possible for the Europeans to withstand a very large overwhelming force of warriors. The Spanish conquerors stood shoulder to shoulder with their halberds and surprised the Indians with weapons that were unknown to them.

The crossbowmen stood in the back rows of the infantry. They only stepped forward for the shot. Then they reloaded their weapon behind the shields, swords and halberds of their comrades. The crossbowmen targeted enemy leaders. The Indians were exposed almost defenseless to the bolts of the crossbows, as even the strong wooden shields and the armor made of cotton or leather were pierced. The conquistadors used the rapier in hand-to-hand combat .

Since many of the men were hidalgos , they practiced with this weapon from childhood. The daily drill had made them seasoned fighters. With their very sharp but much heavier weapons made of wood and stone, the Indians were hopelessly inferior to the conquistadors with their well-balanced swords, because the Indians always used their obsidian swords or clubs as cutting weapons . Due to the long backward movement, the stroke is always slower than the thrust. In addition, the conquistadors had another advantage with the low weight of their sword: They did not tire so quickly and the low center of gravity of their weapon enabled them to counterattacks immediately in close combat by parrying and riposte .

In the case of firearms, it was the arquebus that caused the greatest horror, although this weapon did not always work as intended and its handling was dangerous. Their effects were probably more of a psychological nature due to the noise and the flashes of fire. In fact, it probably wasn't decisive. The most effective range of the shot was about fifty yards. However, it was recommended not to shoot until the enemy was within fifteen meters. The arquebusiers usually worked in teams of two. While one soldier was constantly loading, the other fired. This increased the firepower and the speed with which the shots were fired.

The most important piece of artillery was the bronze field snake . This weapon could also be used well in open field battles. With it, the Spaniards could fire projectiles weighing between eight and thirteen kilograms. Even if the shot was not very accurate, it always opened a breach and caused enormous devastation in the ranks of the enemy. But large bombards were also used to break through walls and small falconets on parapets and watercraft.

The war dogs of the conquistadors also spread tremendous horror . Often the men made their dogs leather jugs, which to a large extent protected them from blows and projectiles. The aggressiveness and fighting power of these dogs surprised the Indians, because they had only known much smaller breeds before.

(Sorted by year of conquest)