The Narváez expedition reached Galveston Island in what is now Texas (November 1528), where they lost their ships. Most of the participants died in the course of the expedition. After years of hardship, only four survivors arrived in Mexico City in July 1536 .

The first years in the New World

Pánfilo de Narváez left his native Spain and came to Hispaniola in 1498 . There he fought against the indigenous peoples of the Arawak , Ciboney , Quisqueya and Caribs . As early as 1508 he met Diego Velázquez de Cuéllar , who later became governor of Cuba. Under Juan de Esquivel he took part in the conquest of Jamaica . Later he was commissioned to conduct an expedition to Cuba . At the head of his men, he also helped subjugate the indigenous people here . In Cuba he married the rich widow Maria de Valenzuela .

In 1520 Narváez got from the governor of the island of Cuba, Diego Velázquez, the order to arrest Hernán Cortés in Mexico and to take command there himself. On April 20 of the same year, Narváez landed near present-day Veracruz with 19 ships, more than a thousand men and 20 guns . His army comprised about 800 foot soldiers, 80 arquebus shooters , 120 crossbow shooters and 80 riders with their horses. Cortés had built the small base Villa Rica de la Vera Cruz a year earlier before moving west. Narváez sent three ambassadors to Gonzalo de Sandoval , the commandant of the base. When the men called Corté a traitor, Sandoval arrested her and had her brought to Cortes in Tenochtitlan to warn him of the threat from Narváez. Narváez evaded to Cempoala and set up camp there.

The struggle in Cempoala, depicted in the Lienzo de Tlaxcala , a codex from the 16th century. Bottom left: the arrest of Narváez.

In Tenochtitlan, Cortés had the three captured ambassadors freed and brought them to his side by bribery. He sent her back to Narváez to bribe more men to switch sides. For about a month delegations were sent back and forth between Narváez and Cortés, but no peaceful solution was in sight. Cortes now decided to fight. He left Tenochtitlan with his best soldiers and marched with them to the coast. On the way he called in more soldiers, so that his force grew to about 400 men. Narváez commanded about three times as many fighters, but they had much less experience. In the meantime he had occupied the city of Cempoala because it offered him better opportunities for defense. Diplomacy with ambassadors continued during the approach, with Cortes regularly giving his ambassadors bribes for important men on the other side.

On May 28, 1520, Narváez expected the attack and deployed his army in front of the city in pouring rain for battle. However, Cortés did not attack until the following night, when Narváez and his people were sleeping in the city. Cortés had divided his soldiers into units of 50 to 100 men, each of whom had a specific assignment. The unit, under the command of Gonzalo de Sandoval, was assigned to arrest or kill Narvaez. Narváez stayed with about 30 men in the main temple of the city. As soon as he woke up, he found himself in a fight in which he was badly wounded and lost an eye from a lance. After retreating to a structure on the temple pyramid, his opponents set fire. Narváez was burned and could now be arrested. His soldiers surrendered by dawn. Narváez was then imprisoned in the Veracruz garrison for two years.

After the fight Cortés took over the defeated soldiers and the entourage of his opponent and immediately went way back to Tenochtitlan. He hurried ahead with most of the soldiers and let the entourage and local allies march after them. The retreating group was attacked by warriors from Texcoco , who took everyone prisoner. In Zultepec , the 550 prisoners were sacrificed to the gods over the course of six months and some of them were eaten.

After his captivity, Narváez returned to Spain, where he complained to the king about Cortés. The king then awarded him the title of Adelantado . However, this title meant nothing until he had conquered the land belonging to it. He was given the task of researching, settling and managing Florida and the area up to the Palm River ( Rio Grande ). According to the contract, he had a year to raise an army and found at least two cities, each with a hundred inhabitants. For this he should secure the coast with garrisons and two fortresses. Narváez was largely responsible for the financing himself. He did it in large part by promising investors riches that would be found in the new lands. During the time of his imprisonment and his absence in Spain, his wife had managed and increased the family fortune well. He used almost the entire sum for the expedition and also took on many debts. 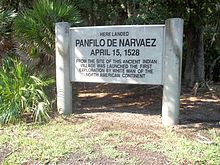 Notice in Saint Petersburg about the alleged place of landing

On June 17, 1527, his fleet set sail from Sanlúcar de Barrameda . A ship was lost in a hurricane during the crossing . During a stopover in Hispaniola, 140 men deserted. In the spring of 1528 he finally left Cuba with six ships and 500 men. On April 13, 1528 Narváez landed on Florida's west coast, near today's Tampa Bay . On the beach he rammed a standard into the sand and took possession of the land with the usual formula in the name of the king. His officers swore allegiance to him. But the Spaniards did not find the riches they had hoped for in this place. Having little to eat and no gold, they marched north. The locals had told them that they would find food and lots of gold in Apalache. So Narváez divided his already weakened troop on May 1, 1528. The five remaining ships were supposed to sail along the coast and meet with him again at a later date. He himself penetrated the Florida swamps with 300 men.

Captured Indians were forced to show the Spaniards the way to the rich city of Apalache . There they hoped for as much wealth as Cortés had conquered in Mexico. The march was extremely difficult. There were no paths, just swamps, thick forests, and fallen trees. The men had nothing to eat for two weeks; Illness further weakened them. Only the belief in the rich city and filled treasuries kept them going. Already on the way to Apalache they were persecuted and attacked by locals. Narváez ambushed several of his men and killed several local people. He also took some prisoners in this operation. But all they found in Apalache after a week-long march on June 25, 1528, were a few grass huts that were covered with palm fronds. There was no gold, and the Indians didn't want to share the corn from their fields with them. They fought doggedly for their food supplies. In the marshy terrain, the Spaniards could do little with their cavalry and their armor prevented them from frequently crossing rivers, lakes and swamps. In addition, the Indians' arrows were so powerful that they penetrated the armor. The Indians kept attacking and forcing the conquistadors to retreat.

Captured Apalache warriors told the Spanish that the people of Aute had a lot more to eat and lived near the sea. But to get there, they had to cross a large swamp area. For many days the Spaniards traveled through the swamps with great hardship. Again and again they were attacked by the Indians. Most of the members of the expedition were sick, wounded, or near starvation.

When they reached Aute, Narváez sent the treasurer Cabeza de Vaca with some men to find an access to the sea. In fact, he found a bay with shallow sea water that was full of oysters . After two days of searching for better access to the sea, he returned to Narváez to report to him. He decided to move there with the whole troop because at least that way they could feed on the oyster beds. The horses carried the sick and wounded. During the march to the shallow bay, some noble gentlemen thought of deserting their horses. But this plan could be thwarted.

Boat building in the Bay of Horses

After a few days at sea, the Spaniards decided to build boats and flee Florida . To do this, they melted down their weapons and armor. They used the iron to make tools such as axes, saws and nails. They used palm leaves as tow to seal the boats, and they sewed sails out of their shirts. Without any knowledge of shipbuilding and without the right tools, the boats were in fact much too small. They were 9 to 12 meters in length and were equipped with oars. They were built very flat and resembled rafts.

During this time they raided the village of Aute several times and stole grain there. Every third day they were forced to slaughter a horse. The meat was eaten, the skin used as a container for water, and the hair used to braid rope. In honor of the animals they killed, they named the place "Bay of Horses".

On September 22, 1528, the Spaniards set sail with 242 men, divided into five boats. For weeks they drove west along the coast. Storms and currents separated the boats from each other. Many of the men died of thirst or starvation or lost their lives in the storm. In November 1528, the Narváez boat landed on the beach on the "Isle of Bad Fate" ( Galveston , Texas ). Other members of his expedition were already shipwrecked here. At that time, 80 men were still alive. They could not go any further because the men were at the end of their tether and their boats were no longer seaworthy. While Narváez's men went ashore, he stayed on board himself. During the night a storm came up that drove his boat out to sea - unnoticed by everyone else. Since then one has never heard from Pánfilo de Narváez again.

About 400 men died on the Narváez expedition. After the boats were lost in September 1528, the remaining members of the expedition had to try to survive on land. Their numbers were steadily decimated over the next four years: nearly all of them were killed, starved, or died of disease by locals in southern Texas. In 1532, only four of the men who had made it to Texas were still alive: Álvar Núñez Cabeza de Vaca , Andrés Dorantes de Carranza , Alonso del Castillo Maldonado, and the slave Estevanico . They managed to make their way west on long marches. As the first humans from Europe or Africa, they came to the southwest of what is now the United States and the northwest of Mexico. Locals accompanied them all the way to Culiacan . There they met other Spaniards in May 1536. They reached Mexico City on July 24, 1536.

On his expedition, Hernando de Soto found a fifth man named Juan Ortiz living in Florida. He had been captured by the Indians and lived with them as a slave for almost 12 years. From then on, Juan Ortiz worked for Hernando de Soto as an interpreter.

Alvar Núñez Cabeza de Vaca published an account of his experiences in 1542 - the most important source for the Narváez expedition. The publication sparked the discoveries of Marcos de Niza and the Coronado campaign.