March 12 : During the Wars of the Roses , the Battle of Losecote Field ends with the success of the House of York under England's King Edward IV over the House of Lancaster under Richard Neville, 16th Earl of Warwick , known as "Warwick the Kingmaker" with George Plantagenet, 1st Duke of Clarence , this time tried in vain to bring a new king to the English throne. Richard Neville is charged as a traitor and has to flee to France. 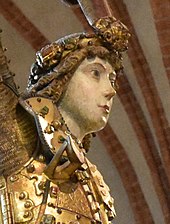 Illustration to the Twingherrenstreit in Diebold Schilling's Bern Chronicle, 1485

With the election of the master butcher Peter Kistler for Schultheissen of Bern on April 23 starting Twingherrenstreit between the nobility and the notables of the city. With the intention of expelling the noble families from the council and curtailing their powers and privileges in favor of the city of Bern, the council passed a strict dress code that aroused fierce resistance from the nobility. During a fair in the Bern Minster , the von Bubenberg , von Erlach , von Diesbach , Matter, von Ringoltingen and others demonstratively appear in their forbidden clothes. This leads to a court hearing in which the noble families insist on their outward demarcation from the common people and defend this as an innate privilege willed by God. The spokesman for the nobility party and the main opponent of Peter Kistler is the master furrier Hans Fränkli . The process ends with fines and everyone involved is banned from the city of Bern for one month. After a short period of time, however, the Bernese Council felt compelled, for economic reasons, to let the exiles back into the city and to change the clothing laws in favor of the noble families.

Around 1470 Johannes Müller, known as Regiomontanus , continued to develop the Jacob's staff .

Schwabacher , a variant of the broken script, was created around 1470 .

Arnold Therhoernen is the first to use custodians for printed books. 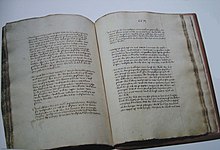 The White Book of Sarnen

The White Book of Sarnen is created, a collection of federal documents and historiography of central Switzerland written by the Obwalden Landschreiber Hans Schriber . The legend of William Tell was first written down in the book .

Pope Paul II stipulates that the Catholic Jubilee should invariably take place every 25 years, starting with the year 1475 .

Territories and dominions in Europe, the Middle East and North Africa around 1470