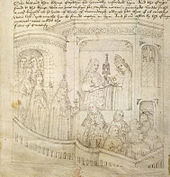 After the death of the Olomouc administrator Wenzel Gerard von Burenitz on September 12th , the majority of the canons present elects Johann von Bucca as his successor on September 21st . However, the members who were not present elect the Vyšehrad dean Albrecht von Březí on October 3rd . King Wenceslas and the Archbishop of Prague confirm the election of Albrecht, whose opponents are to be captured. After Albrecht attended the mass of a Hussite priest a few days after his inauguration, an uprising broke out in Olomouc. Albrecht flees to the episcopal city of Kremsier . Thereupon on December 14th the Council of Constance appointed Johann von Bucca as administrator of Olomouc . Nevertheless, the king and the archbishop refuse to confirm Johann in his office.

When he was born , Thongwa Dönden became the 6th Karmapa of the Karma Kagyu School of Tibetan Buddhism .

The grave of the Duke of Berry in Bourges Cathedral